The already inhumane conditions in migration hotspots on Greek islands have been worsening for months. Here's what options exist to ameliorate the situation — and why they don't seem to take.

Despite EU efforts, many Greek islands remain accessible to people who are seeking asylum in the European Union. In fact, more people cross from Turkey to the islands in the eastern Aegean Sea than depart from them, creating a growing population in reception centers for whom the authorities have struggled to provide.

Migrant reception centers regularly operate beyond their stated capacities, according to an examination of occupancy rates. 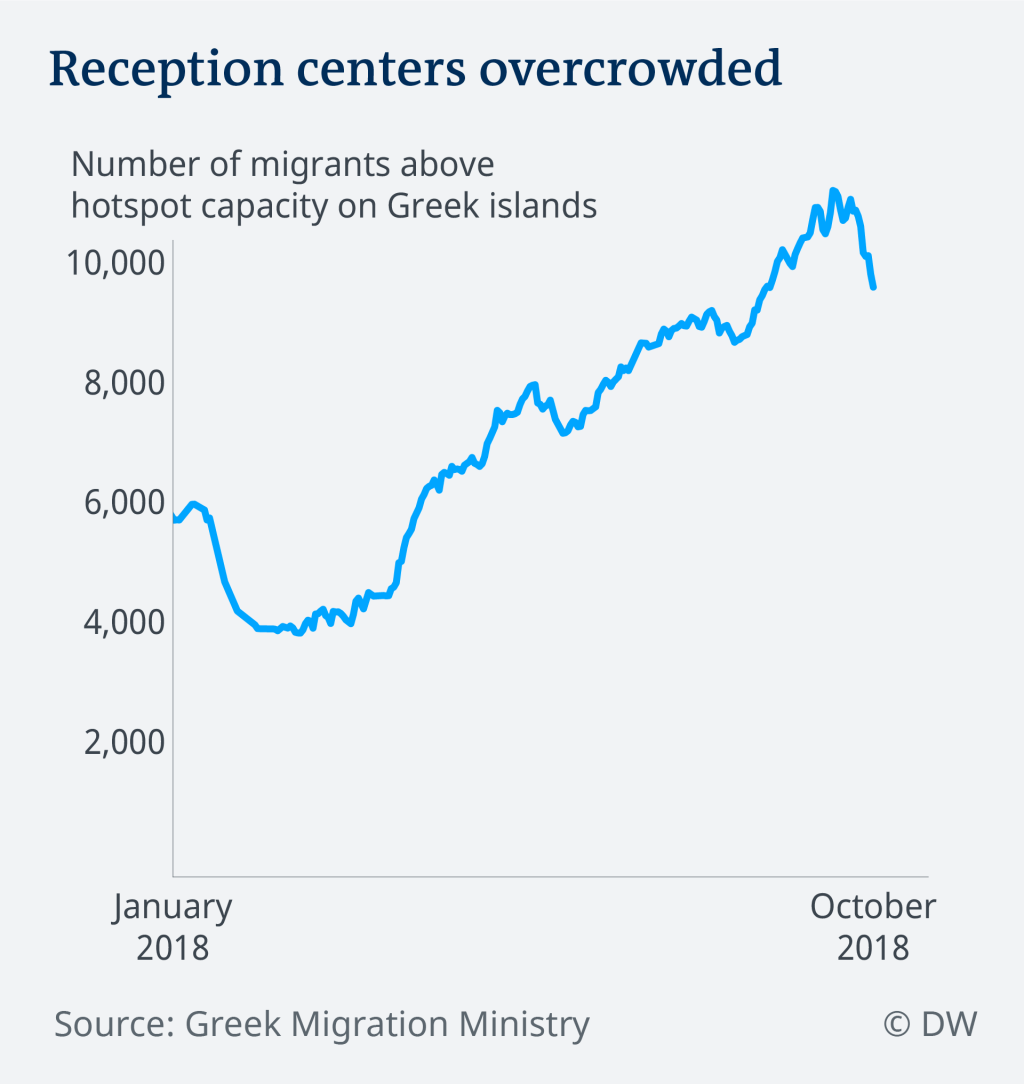 As more individuals arrive by sea, accommodating them becomes harder, and being constantly above capacity renders services ineffective in the camps.

Too few caseworkers to deal with high number of applications

International law stipulates that asylum applications have to be examined individually. Despite assistance from the European Asylum Support Office, the number of applications per caseworker has significantly increased in Greece. In the beginning of 2013, for each caseworker there were 26 applicants; by 2017, each worker had to process 88 applications — almost three times as many. 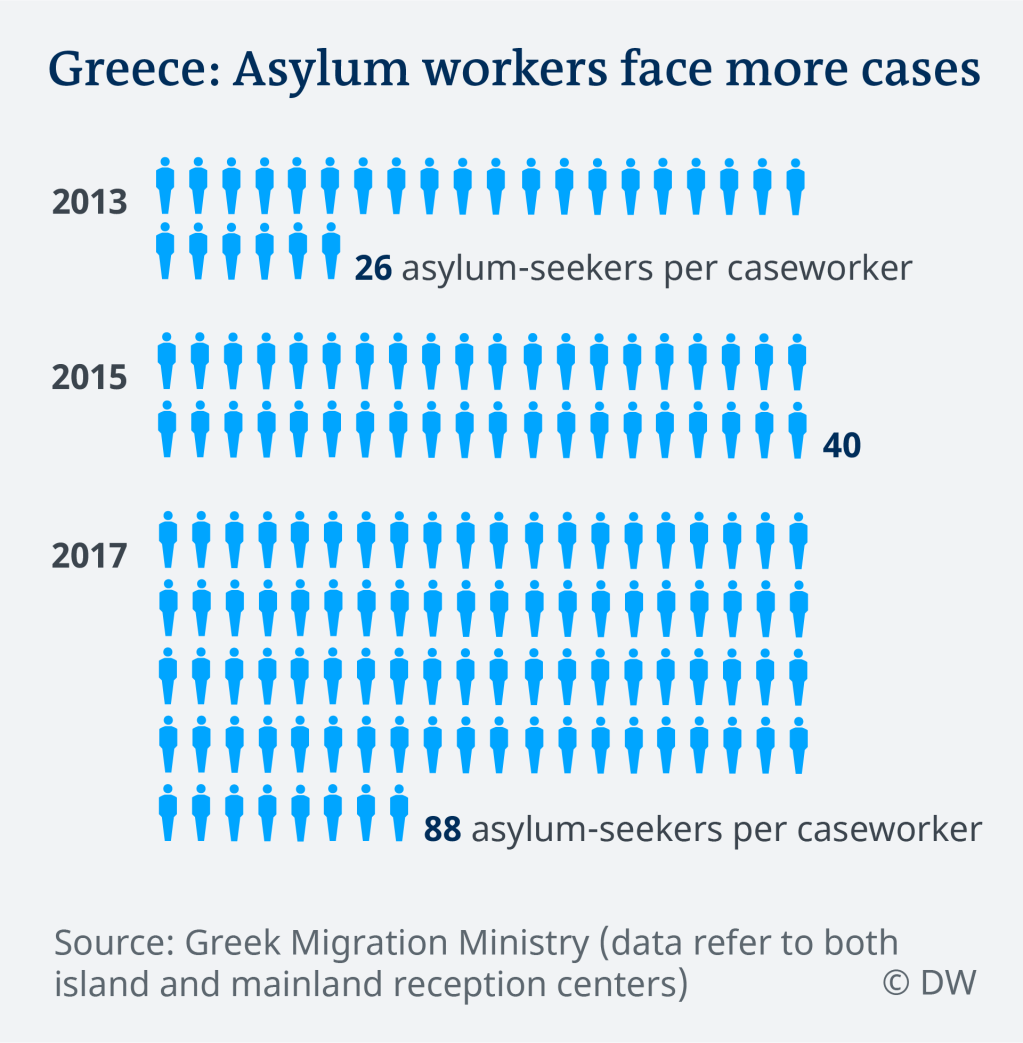 Authorities did increase staff on the ground, however this did not happen fast enough: A 2017 report from the European Court of Auditors notes that delays in increasing the number of staff members affected the service's capacity to handle asylum applications.

Theoretically there are several ways by which people can leave reception centers. According to the EU-Turkey deal, all individuals who pass through Turkey en route to Greece but do not qualify for asylum would be returned to Turkey. Despite overall lower numbers since the agreement went into effect, more people still arrive than depart: Two years into the deal, 2,367 migrants who were not eligible for asylum in the EU have returned to Turkey. How small that number is becomes apparent when it is compared with how many people arrived during an even shorter period: In October 2018 alone, 3,370 people arrived to the Greek islands by sea, according to data from the UNHCR.

Turkey only accepts returned migrants who are housed on the islands. This "geographic restriction" means that Greek authorities cannot send asylum applicants to mainland hotspots to relieve the pressure on the island centers.

Nevertheless, some efforts have been made to transfer people to facilities on the mainland: As an exemption from the geographic restriction, up to 23,000 vulnerable individuals — such as sick people, women and children — were relocated from the islands to the mainland from January through October 2018, a spokesperson for Greece's Migration Ministry told DW.

Though Greek authorities have made progress, their efforts have not been able to keep up with the conditions. "Over the last three months, UNHCR assisted the Greek government to transfer 8,000 asylum-seekers from the islands to better shelter on the mainland," a spokesperson from the UN Refugee Agency told DW. "However, some 10,000 new sea arrivals were registered over the same period. … Cold weather has arrived, and emergency measures are needed to ensure that adequate shelter and services are provided to the people staying on Samos and Lesbos. Accelerated transfers must continue to be a priority."

Relocation to other EU member states at slow pace

The third way to relieve the pressure on the centers would be to relocate eligible migrants and refugees from Greece to other member states — as foreseen by the EU relocation plan agreed to in September 2015. Over two years, 50,400 people were supposed to be relocated from Greece to other EU member states. However, only 21,999 people (44 percent) had been transferred through October 2018. 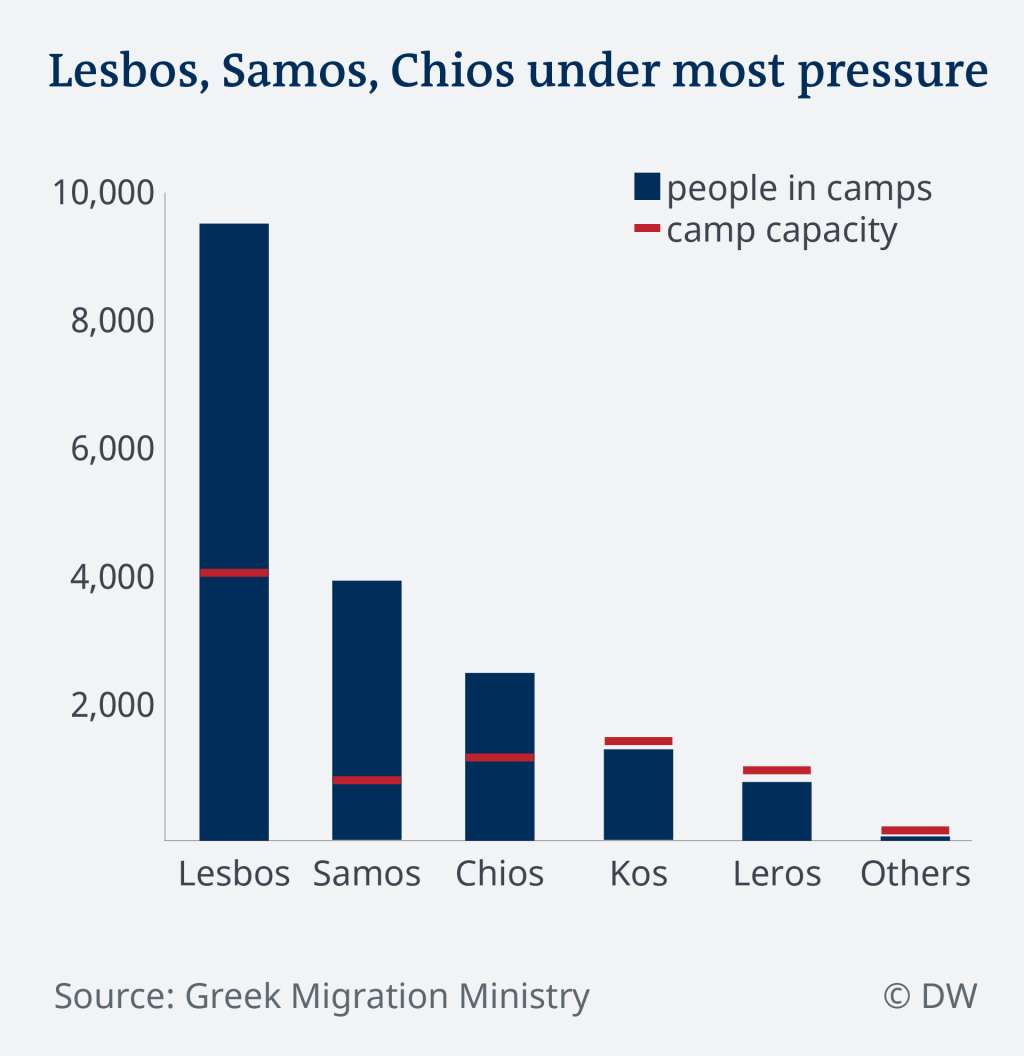 With people not being moved out of the camps, another option would be to increase the size of the facilities.

Capacity is currently most overstretched in the camps on Lesbos, Samos and Chios. Satellite imagery, however, shows that the camps on these islands are surrounded by empty land. 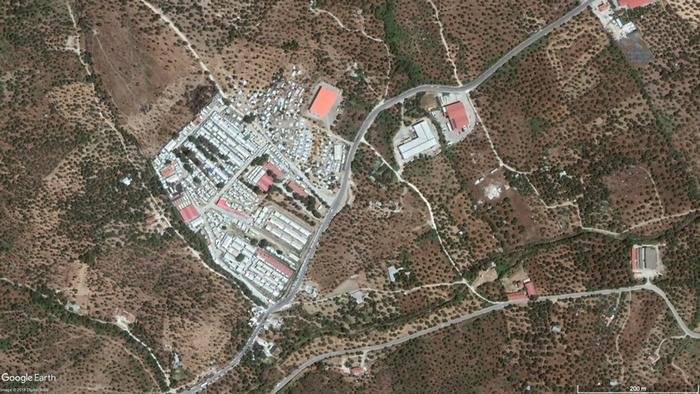 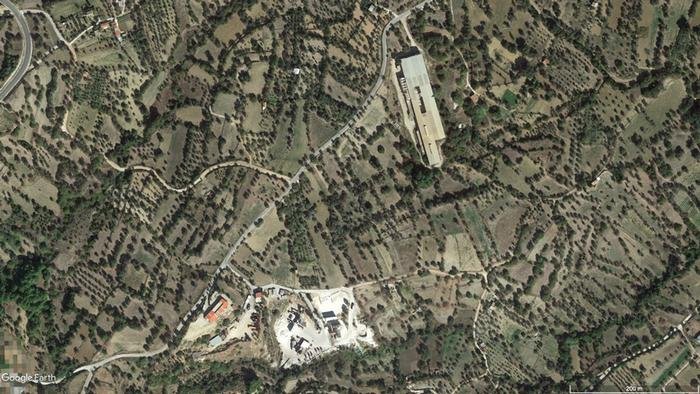 "Land adjacent to the reception centers is private, but also proposals to expand the sites have met resistance by local authorities and local communities, who feel they have to assume a disproportionate responsibility to support refugees and migrants," the UNHCR spokesperson said.

With the very opening of the centers having already led to protests, Greek authorities seem reluctant to make use of the land to expand capacity, as called for by both the UNHCR and the European Court of Auditors.The latter concluded in its report that islands "face challenges in hosting and accommodating hotspots on their territory in terms of infrastructure, support services, or opposition from local residents or tourism providers."

The UNHCR offers a similar assessment: "UNHCR continues to urge the Greek authorities ... to improve conditions and services for those who continue to stay. Given the present reality, there cannot be meaningful support without considerably reducing the overcrowding on Samos and Lesbos."

Reacting to the severity of the situation, the EU channeled additional funds to Greece. Beyond regular funding channels, through which the EU has allocated €561 million ($636 million) to Greece for 2014 through 2020, the European Commission allocated an additional €948 million through its emergency financing tools and mechanisms.

The money is used to provide infrastructure support for Greece, fund programs designed to improve food distribution and shelter conditions, and finance cash transfers to migrants and refugees. 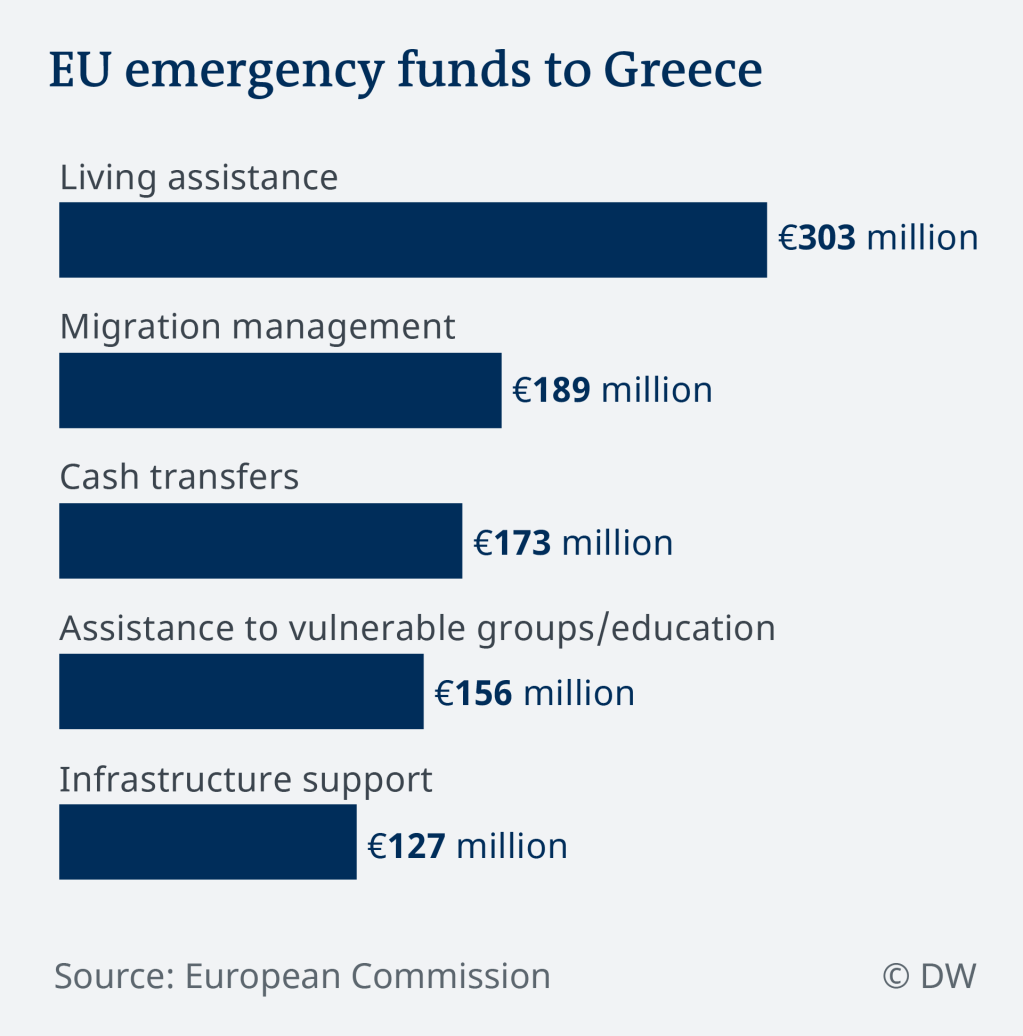 That's overall good, but there have been issues here, too: Notably, after the European Commission submitted financing information to regulators in 2017, OLAF, the European Anti-Fraud Office, began investigating "alleged irregularities concerning the provision of EU-funded food for refugees in Greece." As the investigation is ongoing, OLAF declined any further comment on the matter.

Despite all of the problems, regional authorities, EU officials and local residents are making efforts to alleviate the situation. "European member states should act and not refuse to view this as a European issue," Stavros Miroyannis, manager of the refugee reception center Kara Tepe on Lesbos, told DW. An EU solution is needed, he said, to ensure that the pressure not fall on any single actor, that asylum processing be carried out in third countries such as Turkey or in Northern Africa, and that legal paths for migration emerge. Unless this is done, Miroyannis said, no matter the millions spent, problems will persist.