In EU member state Slovenia, paramilitaries say they are facing down a migrant 'threat' on the border with Croatia. Their patrols includes trying to catch migrants climbing over the border fence and signalling their presence to the police. The founder and group commander this year served time in jail for forming the vigilante group and urging the overthrow of state institutions.

Dressed in camouflage and armed with air rifles, Slovenian paramilitaries move in formation through woods a stone's throw from Croatia. The vigilantes appear in a video by the news agency Reuters whilst they are patrolling a border zone where the group's leader claims illegal migration is rife.

The more than 50-strong group, some of whom mask their faces with balaclavas and which includes a handful of women, is led by Andrej Sisko, who has already spent six months in prison for his paramilitary activities.

The group commander also heads Gibanje Zedinjena Slovenija, a fringe nationalist party that has so far failed to win seats in parliament. Sisko believes the authorities are failing in their duty to protect Slovenia against what he views as the migrant threat, and so he founded Stajerska and Krajnska Varda (Stajerska and Krajnska Guard) to fill that gap.

Anti-migrant sentiment on the rise

The mushrooming anti-migrant "home guards" movement was until recently unthinkable in the traditionally liberal Alpine EU member state of 2 million people. But anti-migrant sentiment in Slovenia and other ex-Communist states has risen sharply since 2015, when eastern Europe bore the initial brunt of the migrant arrivals via the Balkan routes.

Much of the region has, since then, resisted attempts by EU authorities in Brussels to enforce a continent-wide quota system for new arrivals. Slovenia, though has signed up to the quota system.

Across central and eastern Europe, which is a doorway into western Europe for migrants, countries such as Hungary have faced criticism for open anti-migrant policies. Similar right-wing guards frequently attack migrants attempting to cross the borders of Hungary and Bulgaria.

Police in Croatia - an EU member state that is still not part of the borderless EU travel zone - routinely face accusations of pushbacks and violence against migrants trying to cross the border from Bosnia.

On November 8, Human Rights Watch (HRW) said Croatia should not be allowed to join the Schengen area because of alleged abuses against migrants.

In Slovenia, the authorities are putting up additional fences on the border with Croatia after Italy’s former hard-line interior minister, Matteo Salvini, threatened "physical barriers" would be built between Slovenia and Italy if the migrant flow wasn’t completely stopped. 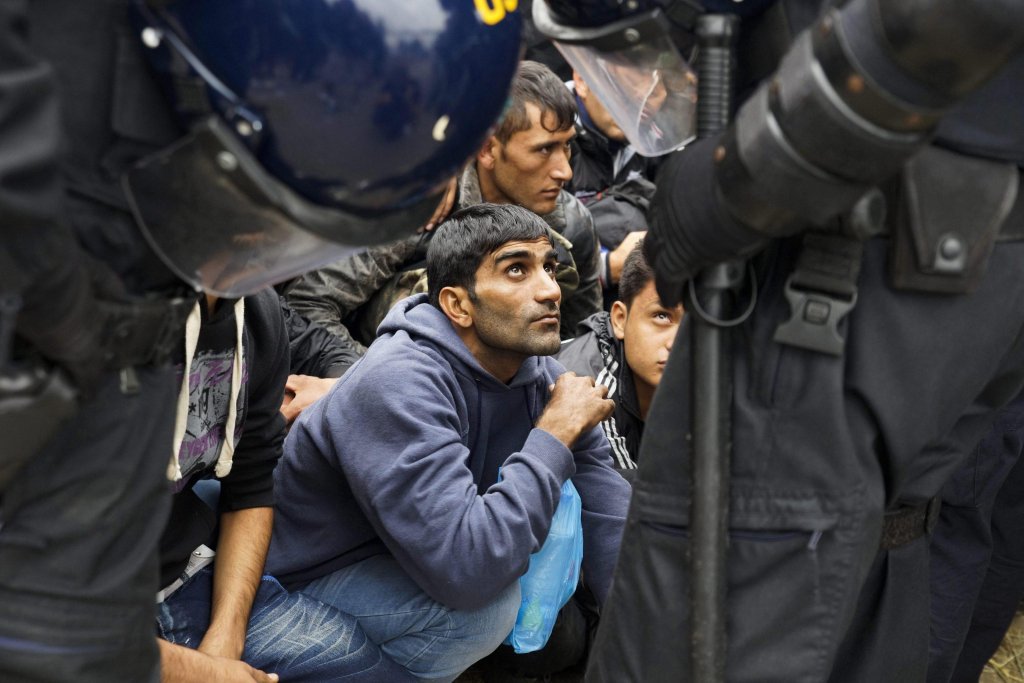 According to Slovenian police, numbers of migrants crossing irregularly from Croatia to Slovenia - where a razor-wire fence has been erected along stretches of the border since 2015 - rose to 11,786 in the first nine months of this year from 6,911 a year earlier.

The International Organization for Migration (IOM) has a slightly different number for the same period this year: It registered 11,102 irregular arrivals through September, compared to 8,477 in all of 2018.

He said the group, which generally meets in the border zone at weekends, does not intercept migrants - which he emphasizes would be against the law - but advertises their presence to security forces.

Police told news agency Reuters they were monitoring the group's behavior and had not detected any recent illegal activities. The name of the self-styled group evokes memories of the militia that sided with fascists during World War II.

"I would prefer to enjoy my retirement peacefully, but security reasons are preventing this," said Blaz Zidar, a 47-year-old former Slovenian army soldier and Stajerska Varda member.

Zidar complained that he had to act because Slovenian police aren’t doing their job of guarding the borders from migrant arrivals.

Miha Kovac, a Slovenian political analyst who is a professor at the University of Ljubljana, said that in the short run, the right-wing groups represent no real danger to the tiny EU nation. But if the European migrant crisis continues, “this kind of movement might become more aggressive.”

"Slovenia is a country of 2 million and if the numbers of immigrants rises in relation to the population so that you have say ... 20, 30, 40, 50,000 immigrants, this could cause quite significant problems," Kovac said.

New migrant route to the EU

In October, authorities in Slovenia, Italy, Bosnia and Croatia dismantled an organization that allegedly smuggled migrants from the Balkans to EU countries like Italy.

Many migrants now try to find alternative routes to enter the EU. Citing federal police sources, German daily Die Welt reported Sunday that migrants would now use a "vast network of routes" through the Balkan states in order to get to central and western Europe.