Overwhelmed by refugees, Italy has threatened to bar boats carrying migrants from its ports. EU interior ministers have agreed to develop a code of conduct for rescue ships. They are refusing to show any more solidarity.

In the last week of June alone, more than 10,000 refugees from Africa arrived in Italy via the Mediterranean route; the total since the beginning of the year is 85,000. Rome's decision to close Italian ports to refugee ships was met with the approval of the EU interior ministers gathered in Estonia's capital, Tallinn. EU Commissioner Dimitris Avramopoulos urged bloc countries to help Italy, which can no longer handle the problem on its own. But solidarity has been exhausted. Nobody in Rome wants to take in any refugees or open any ports for the rescue boats.

Code of conduct for NGOs

Still, the interior ministers have agreed to draft a code of conduct that will soon serve as guidelines for sea rescue organizations in the Mediterranean Sea. Italy offered to develop binding rules for those organizations.

The aim is to make it more difficult for nongovernmental organizations (NGOs) to travel in Libyan waters and to prevent aid workers from establishing contact with smugglers. For the sake of better monitoring, rescue ships will be obligated to have their tracking devices turned on, to take rescued refugees directly to a port and allow police access to their ships at any time.

The list of requirements seems to insinuate - and not only from the Italian side - that the NGOs are practically encouraging refugees to embark on a journey to Europe and that the helpers' behavior seems to more or less behoove smugglers.

Germany's Interior Minister Thomas de Maiziere also blames the rescuers for the rising numbers, saying: "Trust is not built when a tracking device is deliberately turned off to hide the location." Practices like this will be banned in the new code of conduct.

Sea rescue organizations vehemently deny the accusations. In response to the situation, Amnesty International has accused the EU of passing on a large part of its sea rescue operations to the NGOs and said that the EU's lack of initiative is to blame for the over 2,000 refugees who have already drowned in the Mediterranean this year. According to Frontex, the EU border and coastal protection agency, around 40 percent of all rescue operations are carried out by volunteers.

Despite the unstable situation in Libya, the EU is still trying to work with some of the local authorities there. About half of the more than 90 million euros ($103 million) allotted for the refugee crisis on the Mediterranean route is to be spent on the providing the Libyan coast guard with more weapons and training.

De Maiziere urged the Libyan side to respect human rights standards, and added that the United Nations Refugee Agency (UNHCR) must protect the camps there from attacks. The political aim is to take the refugees directly back to Libya and not allow them to reach Italy.

Yet relief organizations such as Oxfam have reported torture, rape and killings in Libyan camps. "Cooperation with Libya, so that refugees are no longer coming to Europe, exposes these people to even more suffering or even death and is a serious blow to European values," said Natalia Alonso of Oxfam.

Since the EU made cooperation with Libya a pillar of its refugee strategy at the beginning of the year, it has been trying to seek solutions to the problems with local officials, despite the precarious security situation.

One of the few concrete advances in refugee policy is the intention to negotiate with third countries in the future. All possible measures will be implemented - from subsidies to visa waivers - to encourage unwilling states to take back their citizens. Currently, Bangladesh and Nigeria top the list of countries of origin, followed by other West African countries. 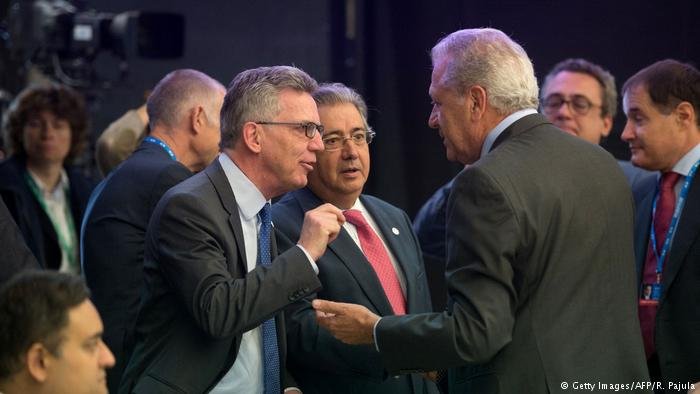 In Italy, too, the EU has pledged additional millions, but they are linked to requirements: faster processing of asylum applications, more repatriation and improved reception facilities. This includes listing safe countries of origin to allow for more deportations.

In a preparatory meeting, France and Spain already refused to open their own ports to refugee boats. There were just as few nations that were willing to receive more refugees. Even distribution that has already been agreed on is moving at a slow pace. Only 7,000 of the roughly 35,000 refugees that arrived in Italy were taken over by other EU countries.

Luxembourg's Minister of Foreign Affairs Jean Asselborn assumed the role of Europe's conscience: "I shudder when I hear statements like, 'We must close the Mediterranean route.' How do you close the sea? Does that mean no longer saving people?" He also criticized Austria's threat to deploy tanks and soldiers to guard against migrants from Italy. "This is not really an expression of solidarity. We must help Italy. That means we have to approach the issue as Europeans."

But solidarity is often outweighed by national interests. "Positions are far apart from each other with regard to solidarity," concluded German Interior Minister de Maiziere. The debate on a common European asylum system has reached an impasse.