Asylum seekers have helped ease the burden for German companies' search for new apprentices. But taking on asylum seekers in apprenticeships remains difficult due to bureaucratic hurdles, and employer groups are calling for more support.

For many years, German employers have struggled to find enough young apprentices. As a result, many positions, especially in the trades, remain unfilled. However, thanks to asylum seekers, the gap is gradually being filled.

In the state of North Rhine-Westphalia there were 29,282 apprentices in 2017, over 800 more than the previous year. Among these apprentices were 1,527 asylum seekers, three times as many as the year before. In Bavaria, the most recent figures show that more than one out of every ten apprentices in the non-trades sector was a refugee in 2017.

The largest number of asylum-seekers applying for apprenticeships in Germany are from Afghanistan, followed by Syria, Iraq and Eritrea - reflecting the number of general asylum seeker applications in the country.

Incentives and problems for asylum seekers in apprenticeships

Many companies have expressed their intention to engage asylum seekers as apprentices, but bureaucratic hurdles remain high. Firms are hesitant to employ those whose asylum status has not been decided, or who have little knowledge of the German language. Achim Dercks, the Managing Director of the German Chamber of Commerce and Industry, says small businesses need help in order to offer apprentices the support they need.

The so-called 3+2 rule offers asylum seekers an extra incentive to take up an apprenticeship. The rule states that if you complete an apprenticeship in three years, you are allowed to stay in Germany for two years following the apprenticeship, even if your asylum application is rejected. 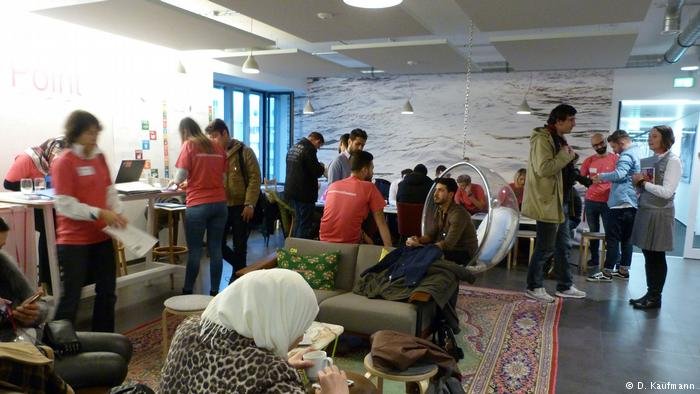 But federal states have different implementations of the regulation. In Bavaria, the conservative government has made it hard for foreigners to become apprentices, according to Franz Xaver Peteranderl, the president of the Chamber of Trades. He told dpa there was no clear political policy.

The Bavarian Chamber of Commerce and Industry (BIHK) says that integration of refugees remained a big challenge for enterprises in Bavaria. It has called for a due date regulation that would allow refugees who came in 2015 and 2016 to enter apprenticeship programs.

The problems extend beyond bureaucracy and red tape, and they also exist in other parts of Germany. The German Confederation of Skilled Trades (ZDH) says many employers have expressed skepticism about taking on asylum seekers. "If an applicant only has a restricted permit to stay, many businesses think that he will have no guarantee that he will stay. ... Many businesses then decide against accepting the applicant," Holger Schwanneke, the secretary-general of the Berlin-based ZDH told dpa. "For companies, it is important have legal certainty. That is not guaranteed for all cases," Schwanneke said.

The Chamber of Commerce and Industry chief Dercks has called on the new German coalition government to strengthen guarantees for apprentices from asylum-seeker backgrounds that they be allowed to complete their apprenticeship and work in Germany under the 3+2 regulations.