RefAid is a free app that connects refugees with services when and where they need them. It's just one of dozens of similar platforms -- so what makes one app for migrants more useful than the next?

“Back home you were part of a community. You were independent and self-reliant. But in this new world, you are dependent on the help of strangers.

”Is it possible that your smartphone could put everything you need in the palm of your hand?”

This is part of the sales pitch from the makers of a smartphone app for migrants called 'RefAid'.

Giving migrants and refugees access to everything they need through their smartphones is a worthy idea. If only it were so simple.

The explosion in the number of people on the move worldwide has coincided with the digital and social media revolution, so it's not surprising that many of those involved in refugee work are using digital platforms, like apps, to increase their impact.

The number of apps for refugees is huge, and the apps themselves offer a broad range of assistance -- from donation apps to language learning and translation software to platforms allowing people to offer their private rooms as accommodation for migrants. A number of these -- not all -- are listed on a website called appsforrefugees.com. Some of the major ones are also mentioned by Olivia Iannelli in an article for the Migrant Rights Network UK, in which she asks the important question:  Are these apps really helping?

One of the big problems that Iannelli identifies -- and which is obvious if you take a look at appsforrefugees -- is that a lot of the apps lose their funding or are not updated and end up in what Shelley Taylor, the creator of RefAid, calls "the app cemetery."

This is where RefAid is making a concerted effort to stay viable.  Taylor, a Silicon Valley veteran who developed the app in 2016 in response to the unfolding humanitarian crisis, says her team put together a list of all the similar apps they could find -- about 25%  of them disappeared in the past year and another 25% failed to update their services. 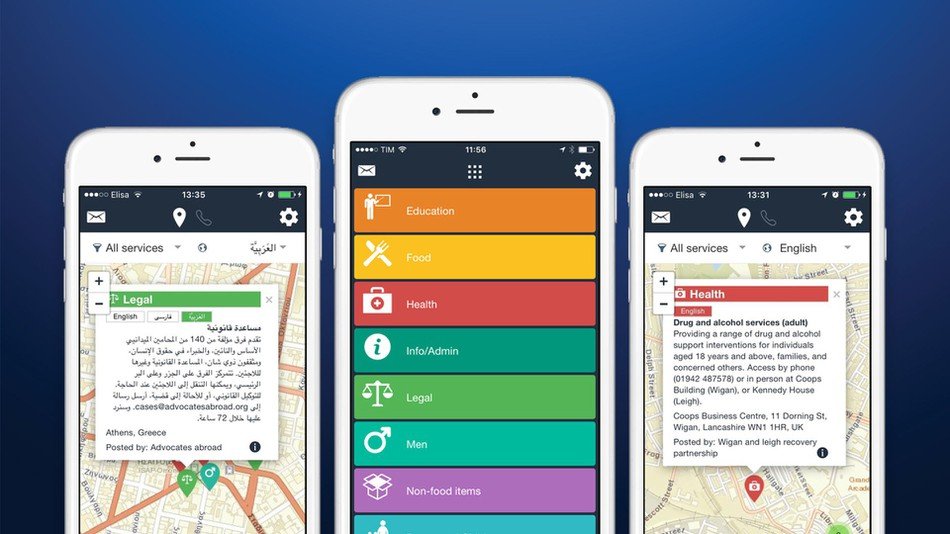 
RefAid was launched just over two years ago in the UK and Italy. Taylor’s software non-profit Trellyz, formerly Digital Fan Clubs, had already created geolocation-based apps with real-time data. She knew some refugees were using smartphones, and wondered how the technology could be adapted for them.

RefAid -- now in about 22 countries -- is reasonably simple to use. It shows the location and types of services available on a map, with information about opening times. All of the information provided is from trusted official aid organizations.

The services listed include legal aid; food; shelter; water; aid for parents and children; unaccompanied children; health; education; and toilets and showers. There are push notifications when there is urgent news in particular locations.

One of RefAid’s strengths is that it helps people with different needs – whether refugees have already reached their destination and are focused on integrating, or if they have just arrived off boats.

Also, like other, similar apps, it enables people who don't trust the authorities and avoid using services or going to the police to be independent and get the information they need through their own smartphones.

If you are worried about privacy, RefAid is fairly risk-free. While you do need to register, no user name is required. And the only information collected from app users is an email address.

RefAid was developed for migrants and refugees, but it also helps humanitarian agencies in the field to manage their services.

Organizations like Medecins du Monde, Medecins sans Frontieres, Save the Children, Caritas and the Red Cross input their own data, so it's self-service. A key to the app's success, according to Taylor, has been keeping in touch with these organizations and reminding them to update.

In the rush of enthusiasm to solve humanitarian problems with technology, Iannelli says, we should stop to ask whether refugee apps are making a difference: Are they helping the millions of migrants without smartphones or access to the internet? No. Do they solve the problems of resettlement, integration, or xenophobia among host populations? No.

Add to that the fact that decisions are being made in Brussels that will impact the lives of migrants in much more fundamental ways than the best software could. "An app is no match for a roomfull of politicians with a fundamental disagreement about how their union should be organized," wrote Heather Horn in the Atlantic.

At the same time, there are tens of thousands of people and more than 1,500 organizations using RefAid, according to Shelley Taylor.  If some of them are relying on the app, now is not the time to relegate it to the app cemetery.