Update: Lifeline rescue ship will dock in Malta amid controversy

The migrant rescue ship Lifeline has been stranded in the Mediterranean off Malta for the sixth consecutive day. Many of the migrants on board are seasick. Now the Maltese government has announced the ship will be allowed to dock in Malta Wednesday evening.

Maltese Prime Minister Joseph Muscat announced on Wednesday that the ship of German non-government organization Mission Lifeline would be allowed to dock in a Maltese port. "I believe the vessel will reach our shores this evening," Muscat told a press conference. He also said that the migrants, who embarked from the Libyan coast and were rescued by the Lifeline vessel, would be distributed among several EU member states.

Muscat said that the vessel would be impounded after its arrival in Malta. The migrants would be vetted, have their asylum cases examined and those who are not eligible for asylum will be sent back to their home countries. An investigation will also be launched into the ship's registration and the legality of its actions at sea, according to AP.

German Interior Minister Horst Seehofer has also called for the impounding of the ship and a criminal investigation into the activities of Mission Lifeline. Seehofer said on Wednesday the impounding was necessary to prevent setting a precedent, AFP reported.

The Lifeline migrant rescue ship carrying more than 200 people has been stranded at sea for six days. Maltese authorities earlier wouldn't let the ship dock, although they would allow the vessel to enter Maltese waters to seek shelter from rough seas.

Both Italy and Spain refused to dock the vessel. Late Tuesday the captain of the Lifeline ship sent a message to the Maltese coastguard that sea conditions are worsening, and that many aboard were suffering seasickness.

Although European countries are divided over migration policy, eight EU nations have agreed to take in some of the migrants. Muscat said the eight countries are France, Italy, Luxembourg, Portugal, Ireland, the Netherlands, Belgium, and Malta.

"Italy will do its part and take a number of the migrants who are on the Lifeline," Giuseppe Conte, the head of the Italian government, said.

On Tuesday, French President Emmanuel Macron said that France would take some of the migrants on board. He also claimed that the Lifeline ship was breaking the "rules" by taking in the migrants at sea when the Libyan coast guard was already intervening. He also accused the ship of "playing the game of the smugglers." The same day, Portugal also announced it would take in some of those on board.

It is still unclear whether Germany will accept any of the Lifeline migrants. Though some individual German states had offered to share the burden, there is no official confirmation by the German government. Italian press reports said Germany had not agreed to participate in the deal, a stance Mission Lifeline's Axel Steier blamed on the Interior Minister Horst Seehofer.

Seehofer has taken a strong stance on immigration and given German Chancellor Angela Merkel an ultimatum to curb arrivals to Germany. 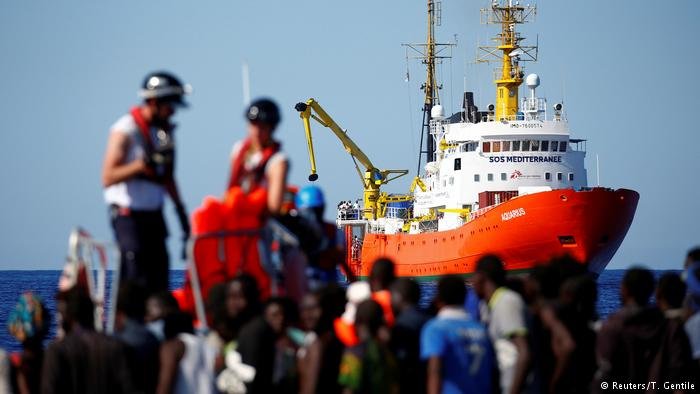 In a case, earlier this month, the NGO ship Aquarius was rejected to dock in Italy and forcing it to dock in Spain.

"This ship is only going to see Italy by postcard," Matteo Salvini, the Italian Interior Minister said on his decision to not let the vessel dock in Italy. "This isn't because Matteo Salvini is ugly, bad or selfish. It's because there are rules and the ship needs to respect them, not play with human lives. You should not put human lives at risk," he continued.

On Wednesday, the Lifeline organization rejected the accusations. "There have been a number of false accusations that Lifeline ignored orders by different MRCCs (maritime rescue coordination centers)," Lifeline co-founder Axel Steier said in a statement. He argues that his charity was following the principle of non-refoulement that migrants cannot be sent back to a country where they can face persecution.

Steier then said Lifeline had denied the Libyan coastguard the chance to "rescue" the migrants stranded at sea because the migrants could face persecution if they were to go back to Libya. "The only order the ship denied was to hand over people to the so-called Libyan coastguard, as this would have been not in line with the Geneva Refugee Convention and therefore criminal," Steier said.

Conditions on board 'unimaginable'

German Green party Parliamentarian Manuel Sarrazin is in regular contact with the Lifeline crew. "They are at risk of dehydration. It's been clear for days that the situation could get worse. There needs to be a solution soon," Sarrazin said about the sick people on board. He added that the crew was close to declaring a medical emergency for two of the passengers on board.

On Monday, German Green party politician Luise Amtsberg was actually aboard the Lifeline ship. She told the Berliner Zeitung newspaper that the migrants had "no space to stretch or to sleep" and that the conditions were "unimaginable". Amtsberg said many people on the vessel were suffering from seasickness and several were injured and had not been properly treated.