From the ground to the shop: Migrants in Barcelona create their own brand clothes

Due to tough immigration laws, many migrants in Spain find themselves selling products on the streets illegally. Local initiatives like 'DiomCoop' offer migrants the opportunity to design clothes and sell them legally - thereby paving the way for empowerment and integration.

T-shirts, belts, watches, bags, sunglasses are some of the products that you can find in most busy places in Barcelona, Spain. They are not sold in shops but laid out on the ground on top of blankets (a 'manta' in Spanish) sold by migrants, mostly from Senegal.

This street-selling business is illegal, yet it represents one of the most important sources of income and livelihood for the 'manteros', as the migrants are called. Usually one finds them near the most touristic attractions around the city - much to the avail of local store owners who have complained to City Hall, arguing that they are losing sales and are requesting a solution to this growing problem. 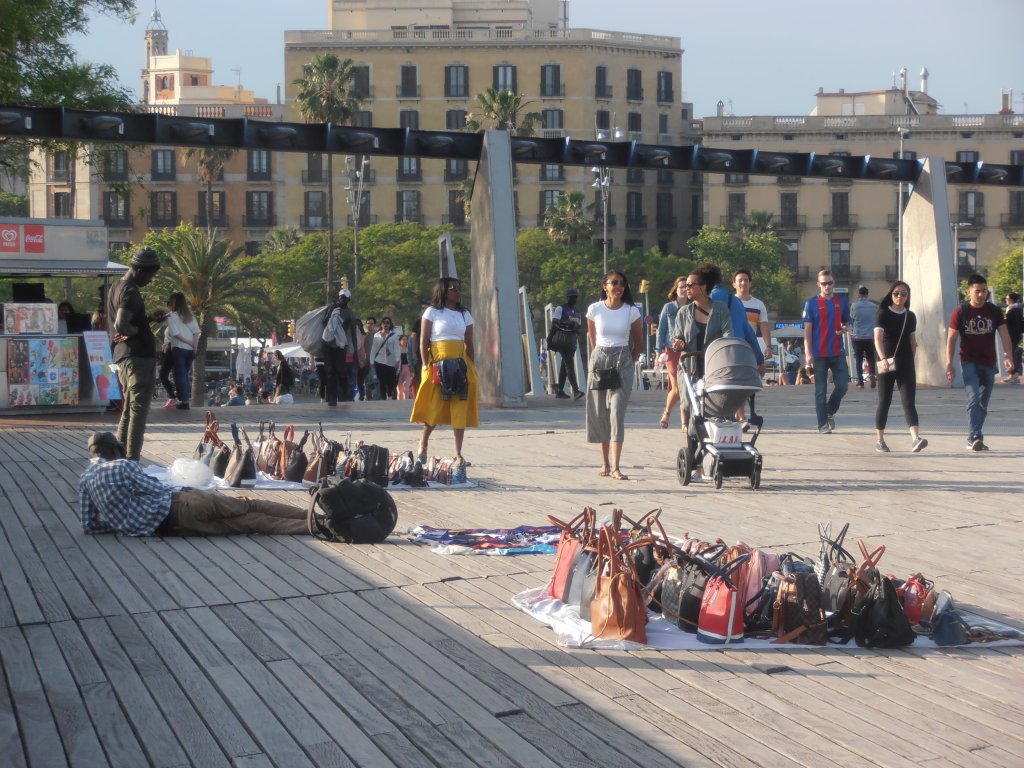 Mayor Ada Colau organized a meeting with the storekeepers on a Friday afternoon in June. The mayor emphasized that non-authorized sales of goods in any space of the city is illegal. She emphasized that this “is not exclusive to our city, but also on other parts of the Catalan coast as well as in large European cities”.

"Street vendors are people who are in a situation of involuntary illegality because immigration law prevents them from working legally", she said. But, "when we give them opportunities, these people will stop selling illegally on the street," she added.

The Barcelona City Hall has managed to benefit a total of 130 people with different programs, one of them is through a cooperative called ‘DiomCoop’.

"This is an innovative project in Barcelona, and in Catalonia too”, said Ababacar Thiakh, a migrant from Senegal who has been living in Barcelona for 21 years. The idea is "to change minds and raise awareness" and at the same time to "generate a source of income and livelihood". 'DiamCoop' was launched last year targeting people mainly from Senegal. “The project was targetted at migrants from sub-Saharan Africa because they are the largest group of people selling products in the street”, said Ababacar. He is coordinating the initiative and he managed the selection process. “There were 350 people selling illegally in the streets at the time and 85 of them applied”, he added.

Finally, a group of 16 people between 27 and 60 years old was selected. The cooperative trained participants for their new positions although some members already had experiences in accounting and marketing. In addition, the cooperative employs five technical staff members to assist the participants.

Bringing color to the city

Last May, the cooperative launched an own dress clothesline that can be found in around 50 shops in the city and in an online shop (www.diambaar.com). “Diambaar wants to add color to Barcelona. It's a unique product that can bring dignity, mutual respect and fight racism. All this without forgetting that they come from somewhere else”, Ababacar said.

Kewa Sarr from Gambia is a tailor and he is the most recent participant to join the cooperative this year. He arrived in Barcelona in 2014. “If I had known, I would have stayed in my city. I didn't know that I would end up selling in the street”, he said. 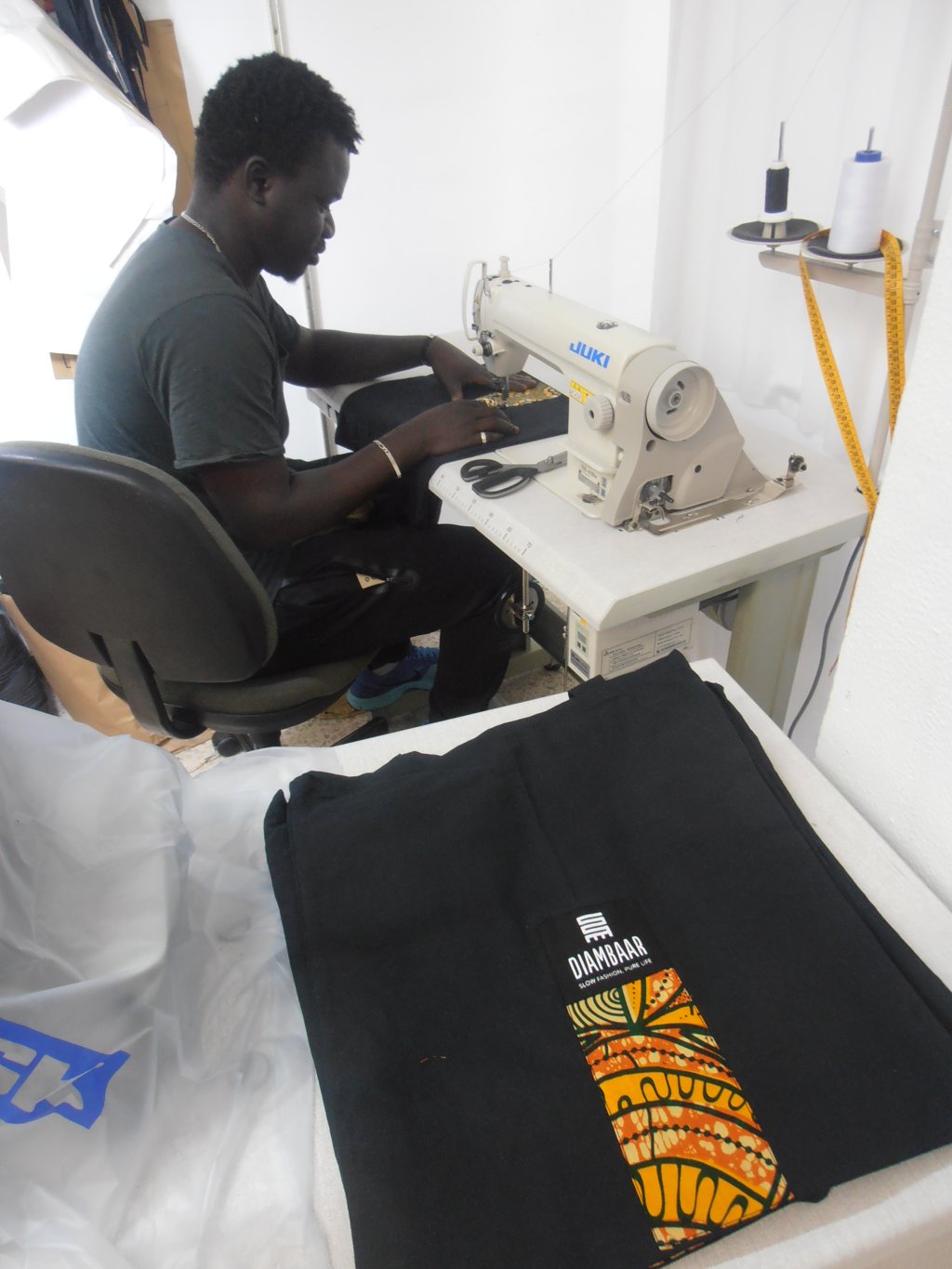 He was selling in the street for three years. “If I had not sold in the streets, I could not have paid for food or rent. You don't have any other way”, he added. The police arrested him several times. Now, being able to work with the fashion designer Sonia Prade, he finally feels at ease.

The cooperative is working in other areas besides tailoring clothes such as gastronomy and security access control. “Everybody is focused in working in their area of expertise”, said Aliouene Tiham, secretary of the cooperative and supply chain expert.

Originally from Senegal and living in Barcelona for 9 years, he joined the group last year. He is proud to participate in this project that allows “the transformation of the person creating something new with his hands”, he said.

The project will last three years and its goal is to empower the participants, as well as with sustainable results at the end of the process. For this reason, training is an essential element “to not depend on the technical staff in the long-term”, he added.

This kind of business seems to be a trend in Barcelona. A group of migrants linked with Sindicato Popular de Vendedores Ambulantes de Barcelona (Streets Vendors Trade Union) launched the ‘Top Manta’ brand in July 2017 as an alternative to the fake products.

"Our clothes symbolize our values: Legal clothes made by illegal people; true clothes for a fake and hypocrite system”, says the trade union. Their T-shirts and sweatshirts show their journey from Senegal and the daily life on the streets, they say.

“Top Manta was linked with hate between citizens and street vendors. Last summer we worked to create a logo with a blanket because it's our friend, our partner that allows us to pay our food”, said Lamine Bathily, trade union’s spokesperson. “Street selling was not our dream. There is so much suffering behind the blanket”, he added. Originally from Senegal and living in Barcelona for 10 years, he is also also a 'mantero'.

So with this new line of clothing, the street vendors want to develop a project to prove their value, to work legally, to contribute to Barcelona's economy and to change local’s perception of migrants. “We didn’t arrive to Spain with empty hands and heads: We have ideas, we can organize and we can cooperate”, he said.

Since the beginning of this year, the trade union is renting a shop in El Raval, the multicultural area in downtown Barcelona. But in order to avoid financial support from the City Hall, they launched a crowd-funding campaign to create now their own cooperative focused in design, and to sale their own clothes. “We need money to buy some serigraph machines, to pay salaries for people and to find another shop”, he said.

Around 2.500 people have donated more than 66.000 euros, 20.000 more than requested. The dream to create their own cooperative, a social company linked to the fashion industry paired with an anti-racist struggle is now closer.