Refugees in an 'enemy country': Exiled Turks in Thessaloniki

They learned at school that Greeks were their enemies. Now many exiled Turks have found refuge in Thessaloniki. Florian Schmitz met some of them.

The fasting month of Ramadan is over. There are plates of baklava and nuts on the table in the one-room flat in Thessaloniki. Three Turkish friends are drinking black tea and chatting about the future. It's the first day they've been able to eat before sundown after the period of fasting.

It actually feels quite like being at home, says a 29-year-old accountant from Izmir. "The two cultures are very similar," agrees a 42-year-old English teacher from Diyarbakir in eastern Anatolia, sitting opposite him. "We have the same food and similar ways of interacting. And if I can't remember a word in Greek, I just take the Turkish word and put an 'i' on the end. It usually works."

This man came to Thessaloniki two years ago. He was one of the first to fall victim to President Recep Tayyip Erdogan's anti-terror measures after the failed coup attempt in Turkey on 16 July, 2016. "I taught English at a state university and was in a union. All of us lost our jobs." He and his two friends have been on a list ever since. They're accused of having connections to the Gulen movement, meaning that for Erdogan they are one thing above all: Terrorists. Many members of their families are sitting in Turkish jails without having been convicted of a crime. This is another reason why the three men want to remain anonymous. 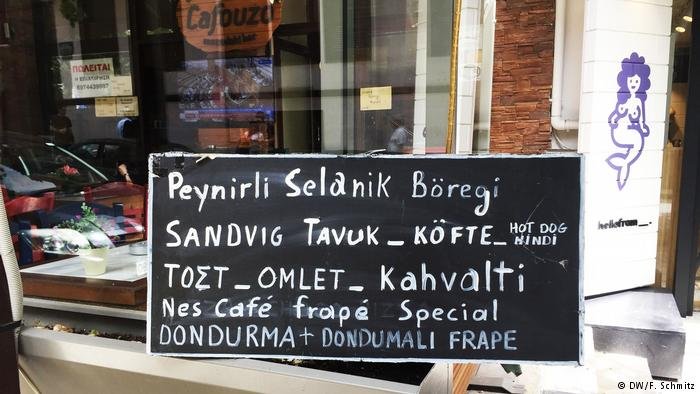 It's hard to say how many Turks are currently in Greece. Many of them are unregistered and are keeping under the radar. Turkish citizens living in Greece have been called upon to vote in the early elections on 24 June. In Turkey's 2017 referendum, only 797 of the 10,556 Turks who were living in Greece at the time and eligible to vote actually did so.

"If I showed up at the consulate they would arrest me on the spot," the English teacher says. He couldn't vote, anyway, as his passport has been cancelled. He says that many Turks in Greece won't vote as they prefer to lie low.

Tensions between Greece and Turkey

Greece and Turkey are engaged in an ongoing dispute. Two Greek soldiers are still in Turkish custody after crossing the border; they say they did so unintentionally. And in May a court granted asylum to one of the eight soldiers who fled to Greece in a helicopter after the failed coup attempt. The court's reason for the decision was that the soldiers could not expect to receive a fair trial in Turkey. This has added to the strain in relations between Athens and Ankara.

But that's not the only reason why many exiled Turks are coming to Thessaloniki. The Turkish journalist Ragip Duran has been living in the city for two years. He says it has to do with the general climate, and with their common histories. "Thessaloniki was the second-largest city in the Ottoman Empire. There are collective memories," he says. "It's also very close geographically."

This last aspect seems to be the main reason why Turkish asylum seekers have been arriving in the city – like the 35-year-old construction engineer, the third in the group, along with the English teacher and the accountant. He's living here with his wife and their two children. If possible, he would like to go to Canada or South Africa, but he feels comfortable in Thessaloniki.

Perception of the Gülen movement

A Turkish interpreter in Thessaloniki told the French newspaper Liberation that the Greek asylum authority has been interviewing two to three families a day since January — all of them members of the Gulen movement. It describes itself as open and ready for dialogue. The English teacher says they value education and exchanges of views, and that institutions with ties to the Gulen movement award grants, and sometimes even send money to support Gulenites in exile. He doesn't believe Gulen was behind the attempted coup.

Ragip Duran, on the other hand, is critical of the Gulen movement. "Gulen presents itself to the world as propagating an open kind of Islam, but that's not true," he says. "This, too, is a nationalistic movement, and it's political, not social-cultural. Some people in Turkey call them the 'Trotskyites' of Islam because they infiltrate the system from within, in particular the administrative authorities, the media and educational institutions." This, he says, is probably also why Erdogan is going after the movement's supporters. These days the Turkish president denies his earlier close ties with Fetullah Gulen.

'Bridge between Turks and Greeks'

Despite the political problems, contact between Turks and Greeks is usually friendly. "There are lots of people here who help us," the English teacher says of Thessaloniki. He learnt at school that Greeks were the enemy, he says. "I can truly say that I've learnt humanity from the Greeks. Especially when I see how well many people here deal with refugees. It's very different in Turkey."

So Erdogan's aggressive policies, which have driven many Turks into exile, have had an unintentional side-effect. "A bridge is being built between Turks and Greeks," the English teacher says. "We're learning to overcome prejudices and historical misunderstandings."