Addressing parliament for the first time since her clash with Interior Minister Horst Seehofer, the German chancellor sought to stress a common way forward. But things remain tense both inside and outside her coalition.

Budgetary debates in the Bundestag are always occasions for the German government to offer general justifications for its policies — and the opposition to take potshots at same. But the atmosphere in the German parliament was particularly contentious on Wednesday after a disagreement over migrant policy threatened for days to split Chancellor Angela Merkel's coalition and bring down the government.

Merkel's speech was thus an opportunity for her to show that her grip on the reins of power remained firm. The chancellor touted the agreements she brokered last week at the European Council meeting in Brussels, saying that they bridged the varying, and often conflicting, interests of the EU concerning migration.

"How we deal with the migrant question will decide whether Europe continues to exist in the future," Merkel said.

She also said that she had stressed the need to better protect Europe's external borders and conclude partnerships with African nations to combat illegal migration.

"Migration is a global problem that requires a global solution," Merkel told the Bundestag deputies.

Merkel is currently negotiating with her junior coalition partners, the Social Democrats, to gain approval of a compromise migrant plan hammered out between her conservative CDU and its Bavarian sister party, the CSU.

A gesture of reconciliation

The centrality of this issue to the success or failure of Merkel's fourth term as chancellor was evident in the fact that she barely spoke of her budget at all. Instead she concentrated on migrants in general and in particular on secondary migration, non-EU migrants moving from one country to another within the European Union for economic reasons or to improve their chances of being granted asylum.

That issue has been the main bone of contention between her and her embattled interior minister, Horst Seehofer, the Bavarian conservative who wants to see a much stricter policy. On this score, Merkel proffered an olive branch.

"It cannot be that refugees themselves determine where their applications are processed," Merkel said, citing a deal with Greece that would allow Germany to send migrants back to that Mediterranean country. "There has to be more order to all forms of migration."

What did they agree to? Here's a summary: pic.twitter.com/zv2ldcpeyX

Merkel said that she and Seehofer would be holding talks with other EU nations to reach similar agreements. It was a gesture of reconciliation after weeks of conflict with the head of the CSU, in which Seehofer threatened to resign and take his party out of its historical parliamentary voting bloc with the CDU.

At the same time, Merkel cited worldwide declines in military expenditures and the global eradication of diseases as examples both of a general improvement in the human condition and of what can be achieved through international cooperation. She also didn't neglect to mention positive German economic developments such as full state coffers and low unemployment. 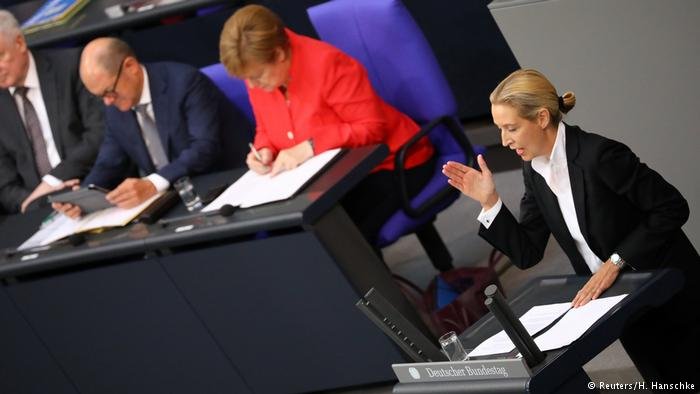 Weidel called the deal on migrants a "Pyrrhic victory" and prophesied that the governmental crisis over the issue would continue. She added that the conflict was symptomatic of a general failure on the part of the government.

"Under your regime Germany has gone from a motor and stability guarantor to a factor for chaos," Weidel said. "How long do you want to continue this spectacle, Mrs. Merkel? You failed everywhere. You've achieved nothing."

The far-right populist concluded by calling upon Merkel to resign.

The SPD lays down markers

With SPD approval for the conservative compromise still pending, there was considerable interest in what the Social Democrats would put forward. SPD chairwoman Andrea Nahles said that after a good start, the government had "begun to sputter in the past few weeks." She added that she hoped work on issues other than migration would resume.

But she also seized the chance to send a couple of barbs in Seehofer's direction. Nahles said that the government "didn't need any master plans" — a reference to Seehofer's long-promised but thus far never officially published plan for reforming Germany's approach to asylum seekers. She also insisted that the foundation of government policy remained the coalition agreement signed by the CDU-CSU and the SPD in March and not any deals struck between conservatives alone.

"There is no new situation on the migrant issue," Nahles said, adding that the passage of a general law governing integration in Germany would be an SPD "priority."

The SPD will meet with its coalition partners on Thursday in an attempt to reach a common migration policy and put the governmental crisis to rest.

Rest of the opposition not amused by 'chaos'

The chairman of the business-friendly Free Democratic Party (FDP), Christian Lindner, complained that the government had been preoccupied with the migrant issue since 2015 without arriving at a solution. He also suggested the government find a policy that spanned the mainstream political spectrum in Germany since "this is an issue that's so thorny even within your own parliamentary group."

The other opposition parties criticized the emphasis on migrants to the exclusion of other important political issues and said that the spat between the CDU and CSU had harmed the political system as a whole in Germany.

"What you've done in the past weeks has damaged our democracy and encouraged cynicism toward politics," said Left Party co-chairman Dietmar Bartsch. "The 'C' in your name stands for chaos."

The Greens indulged in a little plagiarism, making an almost identical quip:

"You lost sight of the basics," co-leader of the Greens' parliamentary group Toni Hofreiter said. "What you've created is chaos."