No EU migration plan can succeed without the Western Balkans, says Michael Roth, Germany's deputy minister for European affairs. He spoke to DW ahead of a summit in London over the region's prospects of joining the bloc.

DW: The Western Balkan Summit in London is set to begin shortly. What are the goals of these talks?

Michael Roth: We want to send a clear signal that the situation in the Balkans is of outstanding importance for the European Union. We remain committed to EU accession prospects, we are drafting expectations, but we also want to assist in practical terms, i.e. help strengthen the rule of law, most notably help create prospects for the younger generation, and contribute to regional cooperation and, especially, reconciliation. No one should abandon the Western Balkans, particularly not at this point. In this respect, this conference in London is an important one.

Will there be further commitments with respect to funding?

We have already made a number of financial pledges. Now it's important to bring projects already agreed upon to a successful conclusion. I'm rather impatient in this regard. On the assets side, there are several positive developments, for example the Regional Youth Cooperation Office, whose primary goal is to bring together members of the younger generation. In this area, I would like to see the implementation of several more projects. After all, it is positive that there are a number of project proposals; only they haven't received the green light yet because funds are limited. We all should do more in this area. Infrastructure is what is at stake as well. A while ago we had the digitalization summit. It has to become clear that ultimately the people in the Western Balkans must benefit. Namely, they must receive jobs, and they must get the feeling that they're not being left alone.

During the lead up to this summit, it seemed that security was the focal point. Is that a correct observation?

A discussion about security in Europe also clearly includes migration, combating causes of flight, prevention of flight. How will this summit address that issue?

Several states in recent years have made remarkable contributions as transit countries. They've taken in many refugees, and we must acknowledge and appreciate that. What we need is a pan-European strategy. In that respect, a migration policy that is developed without involving the Western Balkans can neither be successful nor sustainable. 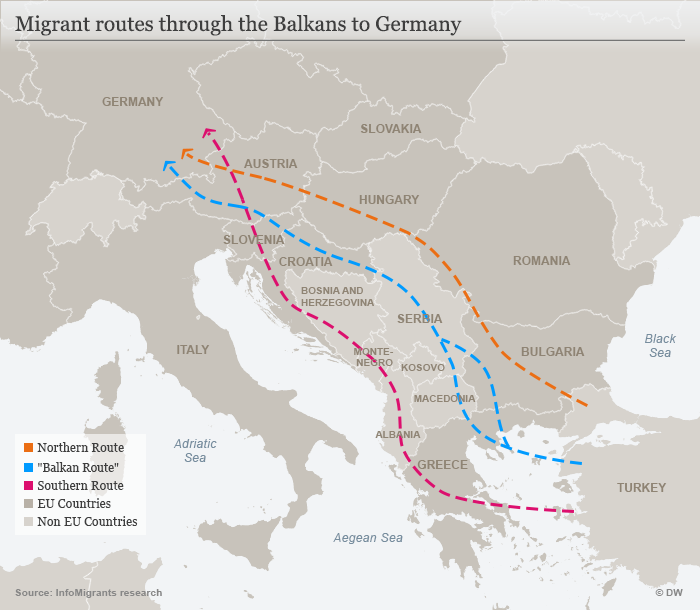 What, precisely, does this mean in the context of taking in refugees and sealing off borders? How can, in your view, the Western Balkans be involved in the future?

We have, of course, an external EU border with the Western Balkans states. We want to protect that border, we want to know who is entering the EU, but we don't want to build a "Fortress Europe." In that respect, it's highly, highly important that we cooperate with the countries in the Western Balkans, which also have a responsibility, and that we assist them in meeting that responsibility. So solidarity is at stake here as well.

We are in London now. London is the capital of a country that will be leaving the EU, and simultaneously the accession prospects of six Balkan nations are at stake here. Do you see a certain contradiction?

As of now, the United Kingdom is still an EU member. If I had my way, the Britons would not be leaving, but ultimately they have to decide for themselves. And as long as Great Britain is a member of the EU, it should live up to its responsibilities. And the situation in the Western Balkans is not only of interest to the Germans and the Austrians. It must be of interest to all of us, and all of us bear responsibility for democracy, for security, for stability, but also for the prosperity of the people in the Western Balkans. So if the Britons wish to make a tangible contribution here, it will be very much appreciated.

Social Democratic politician Michael Roth has been a member of Germany's parliament for 20 years. He has been deputy minister for European affairs in the German Foreign Ministry since 2013.