Migrants left stranded off Tunisian coast: "We only eat a piece of bread and one egg per day"

A Tunisian supply vessel which has rescued 40 migrants has been stuck in limbo off the Tunisian coast since Sunday. Neither Italy, Malta nor Tunisia is letting the ship dock. InfoMigrants is in touch with the crew and survivors on board.

InfoMigrants received a call for help on Facebook on Tuesday, July 17 from Samuel (name changed), a survivor currently on board the "Sarost 5," a supply vessel run by the Tunisian gas company Miskar.

"We are stuck in the open sea off Tunisia … We are exhausted," Samuel said in his message. The Sarost 5 had picked up 40 migrants on Sunday after receiving a call for help by another ship, the "Caroline Tide III."

The migrants had left Libya on Wednesday, July 11, in a bid to reach Europe aboard a wooden boat. After five days at sea "without eating or drinking," the engine of the small vessel broke down leading to the migrants drifting on the open sea until they started approaching a gas platform off the Tunisian coast, Samuel explained.

Employees of Miskar helped the boat in distress and transferred the migrants on board the Sarost 5. The migrants rescued reportedly come from Mali, Nigeria, Bangladesh, Libya and Egypt. Among them are eight women and three children.

Crew members initially received confirmation by Tunisian authorities to dock in the port of Sfax – but the decision was revoked shortly thereafter. The ship then attempted to enter the port of Zarzis on Sunday night without having authorization – but to no avail. Since then, the ship has been stuck at sea a few nautical miles off the Tunisian coast.

In addition to Tunisia, Malta and Italy also insisted they would not open their ports.

Fear of being seen as 'safe haven'

The Tunisian Forum for Economic and Social Rights (FTDES), a Tunisian migrant aid organization, confirmed the information provided to InfoMigrants. "Tunisia is refusing to welcome these migrants at sea because it does not want to be seen as a 'safe port' by European states," a FTDES employee told InfoMigrants.

Ever since Italy has started to close its ports to humanitarian rescue ships, other countries in the Mediterranean region fear that they will become a landing zone and face a massive influx of migrants.

Neither the ship carrying the 40 migrants - which is not a humanitarian rescue vessel - nor the crew members on board appear to be equipped to deal with this type of challenge. Since the rescue last week, crew members have had to share their meals with the migrants on board.

Karim, one of the Sarost 5 crew members contacted by InfoMigrants, said: "We have an injured man and a woman who is pregnant in her sixth month among us. We're stuck in this situation and have to stay at open sea with them until a solution is found. We are running out of food." 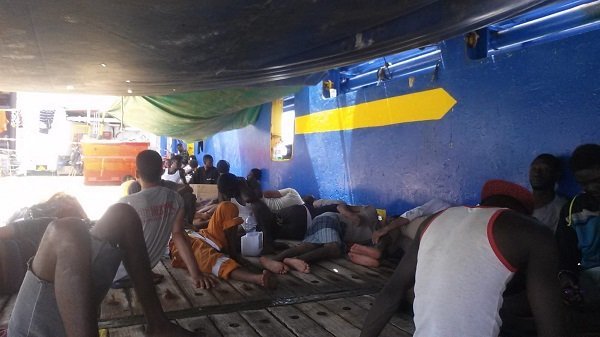 "We are left to fend for ourselves. We hardly eat, because there is no food left," Samuel added. "We eat a piece of bread and one egg a day. We sleep on the floor, we do not have toiletries, neither soap nor toothbrushes. The crew members do everything to help us but they are also exhausted."

On Tuesday, July 17, doctors and nurses from the Tunisian Red Cross came on board the vessel to examine the health of the migrants. Meanwhile the crew of the "Caroline III," which is located nearby, brought packs of water and bread.

As long as no country opens its ports to the boat, the migrants and crew members can only sit and wait.

"We pray that someone will come to help us," Samuel writes.