A German government program aims to help migrants who choose to leave Germany voluntarily to find jobs and prospects in their home countries. But critics say the results of the program are little more than lip service.

After four years, Derrick Adamson had had enough. He was living in Germany illegally, and without valid papers his dream of a better life had come to nothing. "I heard that people from Ghana who were doing badly in Germany were given help if they returned home," 28-year-old Adamson told DW. He went back — and is now receiving support from the German government's migration advice center in the Ghanaian capital, Accra. It arranged for him to be trained in starting up his own business. For one year he also had access to an adviser who helped him make the step to become self-employed. "I don't just approach things without any sort of plan anymore," says Adamson. "For example, I now know that you have to have sound financial planning."

The advice center is part of the "Perspektive Heimat" program, whose name loosely translates to "Homeland Perspectives." The German government funds it to the tune of around €277 million euros ($324.9 million), and is hoping for many more success stories like Adamson's. There are around 4,000 Ghanaians currently living in Germany who are obligated to leave the country. However, deportations are expensive and often do not succeed because the person has no documentation or has gone underground. "We're banking on people leaving voluntarily," Chancellor Angela Merkel said when she visited the Ghanaian president, Nana Akufo-Addo, in February.

However, the government also knows that no one's going to go home if they have no prospects there. The aim of "Perspektive Heimat" is to help create them. Those who return voluntarily are given support in their search for a job, or help with making the move into self-employment. The program is open to all those who have no way of coming to Europe legally. "What's important is that people don't set off on the off-chance that it will work, and lose a lot of money to traffickers and smugglers, but hang on to their money instead and try doing something in their country of origin," says Martin Jäger, deputy minister in the Federal Development Ministry.

There are already 11 target countries in Africa, the Middle East and the Balkans, with advice centers in eight countries, including Ghana. The office in Accra was inaugurated last December by German President Frank-Walter Steinmeier. An advice center is also already in operation in Senegal, and another is due to open later this year in Nigeria. Development Minister Gerd Müller wants to increase the program's budget to €500 million. "That's much better value for money than providing for people here in Germany," Müller said in April. 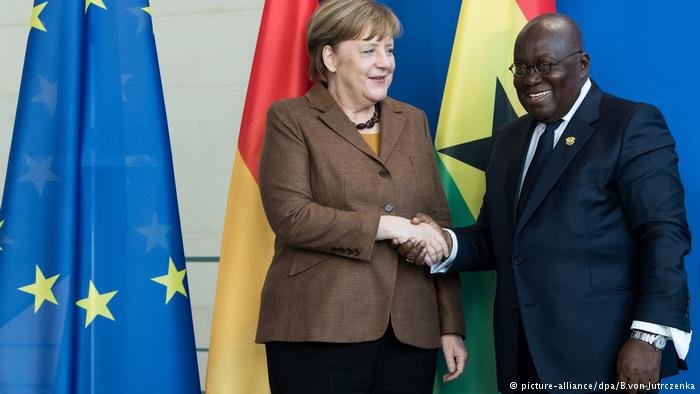 German opposition parties, however, are not convinced. Uwe Kekeritz, the Greens' spokesperson on development policy, declared in the Bundestag that "Perspektive Heimat" was just a program for the sake of keeping up appearances. "Germany has suddenly convinced itself that it's able to run job placement schemes in African countries," he said in an interview with DW. In June, Kekeritz asked the Federal Development Ministry how many jobs had been found to date for voluntary returnees. The ministry answered that between July 2017 and April 2018, 54 percent of all people who had voluntarily returned to their home countries from Germany were given advice. Of these, according to the ministry, 25 percent were placed in employment after an average of one consultation.

Read also: 50 percent of refugees at work in Germany within five years

"We made numerous enquiries as to what exactly was meant by 'employment,' but we never received a proper answer," said Kekeritz. "It may be that it really is a full-time job but only a full-time job with a four-week contract, after which their prospects are insecure again."

He finds it very unlikely that people returning to countries where the economic situation is difficult or even dire — the very conditions that led many of them to search a better future elsewhere in the first place — will find permanent employment after a single consultation. "If these numbers are correct, we can only say that the German job centers definitely need to fly out to Ghana and Morocco and be shown how this is done," he commented.

The Development Ministry, on the other hand, is satisfied. Only just over half of all voluntary returnees come to the advice centers, but its explanation for this is that they simply don't know about them. Things will be different in future, it says. "If someone from Ghana returns to his homeland, I would like every such returnee to have a consultation with us in Germany already and, where appropriate, also to be trained for a qualification," says Jäger. 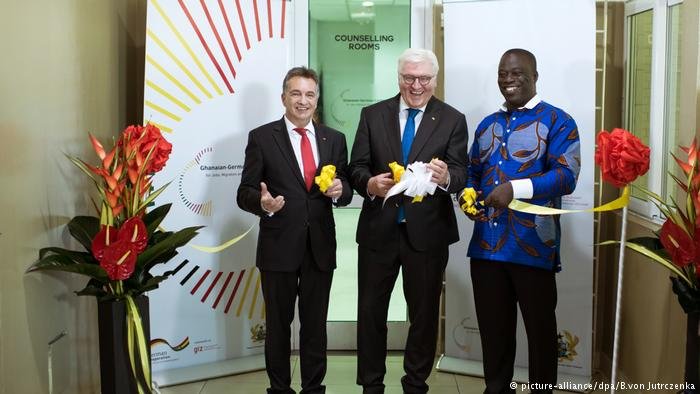 Lack of jobs is a problem

In response to questions from DW, the Development Ministry replied that in the 11 target countries around the world, a total of 3,200 people had found a job between March 2017 and May 2018. This figure also includes people who were not voluntary returnees. The ministry is satisfied with the program: Deputy Minister Jäger describes it as "remarkable" that 25 percent of all the returnees who received a consultation were also placed in work. He does, however, admit that the placement ratios depended to a large extent on economic factors in the respective countries of origin.

It is much harder to find someone a placement in sub-Saharan Africa than, for example, in Serbia. "We have a different economic structure in the Balkans," says Jäger. "There's also a much greater number of German companies." By contrast, in many African countries there are hardly any jobs in the formal sector; these are more likely to be in the informal economy. There are plans for further programs to provide more support for the private economy, as well as a new training initiative, and it is hoped that these will remedy the situation.

"We want to really focus on creating training opportunities in the North African and [sub-Saharan] African countries, and to train people right from the start in such a way as to meet companies' needs," says Jäger. "People should be able to move straight from training into a job with a company." Both German and local companies could be partners in the scheme. However, for the most part these ambitious plans are still in the early stages.