Morocco: A risky migration partner for the EU

As more migrants enter Europe via Spain, the EU is pushing for closer ties with Morocco. But experts question how reliable a partner the country would be on migration, and Moroccans themselves are wary of the idea.

On July 30, a video showing a group of African migrants in a boat arriving on a Spanish beach caused a stir on social media. The migrants jumped off the boat and onto the shore, to the astonishment of the tourists around them. Meanwhile, on Friday, more than 600 migrants attempted to break the barrier fence into the Spanish enclave of Ceuta, which borders Morocco. The two events have reignited a debate over the number of migrants entering Spain, and the European Union more broadly, via Morocco.

Ever since the closure of the so-called Balkan Route, where migrants would enter the EU through Turkey and southeastern Europe, this North African path has become increasingly popular. According to the Spanish Interior Ministry, over 17,000 migrants have arrived in Spain this year, which is twice as many as in 2017. In fact, Spain has overtaken Italy as the most popular entry point for migrants to travel to Europe.

Migrants 'encouraged' due to Spanish attitude

Julian Lehmann, a project manager at the Global Public Policy Institute (GPPi) in Berlin, told DW that migrants are "encouraged" by the Spanish government's attitude on migration. Spain is known to take a much less hard-line approach to the issue than Central European states such as Hungary or the Czech Republic.

Since the majority of the migrants arriving in Spain are coming via Morocco, EU leaders want the the North African country's government to play a greater role in stemming the flow of people. For the past 15 years, the EU has been pushing hard for a deal that would see some of the migrants who came to continent via Morocco returned there.

'Increased racism' towards migrants in Morocco

According to migration expert Mehdi Lahlou of the National Institute of Statistics and Applied Economics at Mohammad V University in Rabat, such as deal would be "unrealistic" for Moroccans. He told DW that Morocco does not have a strong track record on integration, explaining that the country's high unemployment rate has fueled concern over foreign migrants in the labor market and a general anti-migrant sentiment among the public. There is "increased racism against these migrants in Morocco out of fear, competition and poverty," Lahlou said.

Nevertheless, an increasing number of migrants from Sub-Saharan Africa are coming to Morocco due to a "rise in unemployment, desertification and political crises" in nations such as Chad, Cameroon, and Nigeria, he noted. Many of the people in these countries are also fleeing violence from terrorist groups.

In late June, EU states discussed a measure to outsource migration reception centers beyond its borders to countries such as Morocco, Algeria and Tunisia. The Moroccan government, however, turned down the initiative. "Morocco rejects and has always rejected these kinds of methods for managing the issues of migration flows," Moroccan Foreign Minister Nasser Bourita said.

In 2016, the EU reached a similar deal with Turkey that saw Brussels give the Turkish government €5 billion ($5.85 billion) in exchange for holding migrants in the country. The GPPi's Lehmann said that this money only covers part of the cost of hosting migrants and that the agreement is generally not popular in Turkey.

A migrant finding success in Morocco

Lehmann believes that a Turkey-style migration deal with the EU would be viewed with skepticism in Morocco. However, he noted that the country's policy towards migrants and asylum seekers has "improved considerably," and that it is better at controlling migration than its North African neighbors. 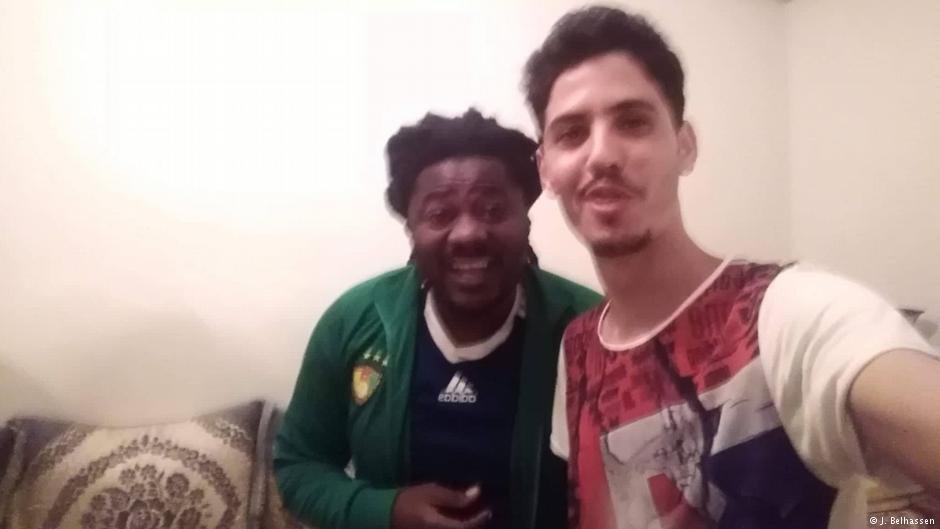 One example of a migrant who has integrated into Morocco successfully is 36-year old Teddy Patou from Cameroon. He told DW that he fled poverty, misery and disease to come to Morocco. Patou said he chose the country because it gave him his chance to pursue his dream of being a journalist. Although he has dealt with racism in Morocco, he has been able to pursue his career aspirations. With the help of his Moroccan friend, Jamal, he recently presented his first radio news broadcast. "I was lucky to meet people who respected me, respected my dreams, and helped me make my way," Patou said.