Despite new act regarding family reunification, refugees in Germany fear separations will continue

Refugees who have subsidiary protection in Germany can finally reunite their families, starting today. Yet still many refugees fear that they will not be able to do so due to the large number of applications the German government will receive on the matter.

Three years ago, the Syrian doctor Taher arrived in Germany as a refugee, leaving his wife behind. He was hoping he could be reunited with her in a short amount of time. However, he only received subsidiary protection in Germany. From March 2016 to August 2018, refugees with subsidiary protection were not allowed to bring their family members to Germany through family reunification. It's been three years, and Taher's wife is still not in Germany with him.

Today, a new act goes into effect, which will allow refugees with subsidiary protection status to participate in family reunification. But Taher is not optimistic. "Despite the many promises I made to my wife that we would be together, she lost faith in me and asked for a divorce," he told InfoMigrants. "In spite of all the attempts I made for us to stay together, she has lost hope that there is any chance of reuniting."

The sheer number of applications for family reunification in Germany is a reason for Taher to be pessimistic. There are currently 34,000 applications for family reunification at German diplomatic missions abroad – lodged in cities such as Beirut, Amman and Erbil. This is despite the fact that Germany will only allow 1000 family members in a month.

Priority given to urgent cases

The new act allowing refugees to bring their family members over will give priority to those family members who have serious illnesses, are in danger, or are the parent of a minor in Germany. In regards to spouses, a refugee can only be reunited with his/her spouse if they were married before receiving asylum, not afterward.

For the refugee in Germany, he or she is more likely to be allowed to bring family members over if they have shown signs of successful integration in Germany, such as having found a job.

The German authorities will decide on each case on an individual basis and so far, the German authorities have not declared the number of people who meet their standards for family reunification. This is what worries Ahmad, another Syrian refugee. Ahmad is 42-years old and has been living in Dortmund for three years now. After Ahmad left, his wife gave birth. "There is no guarantee I will see my wife and child," he said. 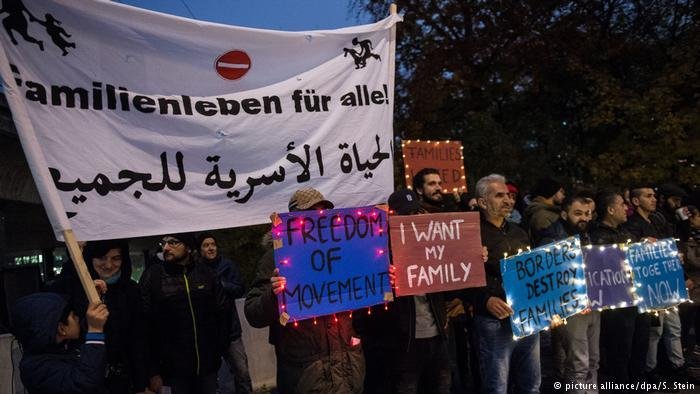 More than 50,000 arrivals in Germany due to family reunification

On July 25, the German Foreign Ministry announced that around 54,000 people arrived in Germany in the past year through the family reunification process available for refugees with full protection status. The Ministry said the majority of these family members came from Syria, Afghanistan, Eritrea, Iraq, Iran and Yemen.

Most of those family members came via the so-called privileged reunification process in which the refugee in Germany did not have to prove that he or she has the money to take care of his family members coming to Germany.

As Germany is restricting the number of people coming to Germany via family reunification for refugees with subsidiary protection to 1000 people per month, this has incited criticism from human rights organizations. Pro Asyl, the pro-refugee organization, called the measures "very stringent".

Although the new act going into effect today could give some hope to refugees who hope to see their families after several years of separation, Taher is still in despair and is trying to convince his wife to stay married so they can be reunited. Ahmad, on the other hand, worries he won't get to know his son. "Will my son even know who I am when he sees me?" he laments.