Critical situation of migrants in Bosnia

Many migrants in Bosnia claim that they have been beaten by the Croatian border police while trying to cross over into the EU. Those who live in tents in forests near the border town Velika Kladusa in Bosnia complain of bad living conditions.

The Bosnian border town of Velika Kladusa has witnessed a massive spike in migrants arriving there in 2018. They hope to manage to breach the border to Croatia, which is a member of the European Union. But this is proving to be a challenging task, with Croatian border police securing the border nearly at all costs.

Tent camps have sprung up throughout the area. At least 500 migrants from countries such as Afghanistan, Iran, Pakistan, Syria, Iraq, Morocco and Algeria live here - under difficult circumstances.

An Afghan refugee who didn't want to be named or show her face told InfoMigrants just how dire her situation is:

"Just look at how we are living. There is rubbish everywhere, the toilets are in a bad condition, and for three years, my children haven't had access to schools," she said.

"We have such hard lives. Whatever happened to our human rights?" The majority of the living in these tent camps people have tried several times to reach Croatia illegally - without success. Some claim they were beaten up by Croatian border forces after being arrested along the border and then forcibly returned to Bosnia. They also claim that the Croatian border forces have taken their money and their phones.

Some refugees living in the tent camps say they have even filed asylum applications in Croatia, but the country apparently refused to register them as asylum seekers and sent them back to Bosnia immediately. Abdul Aziz, an Afghan refugee living in Bosnia, confirmed those reports: 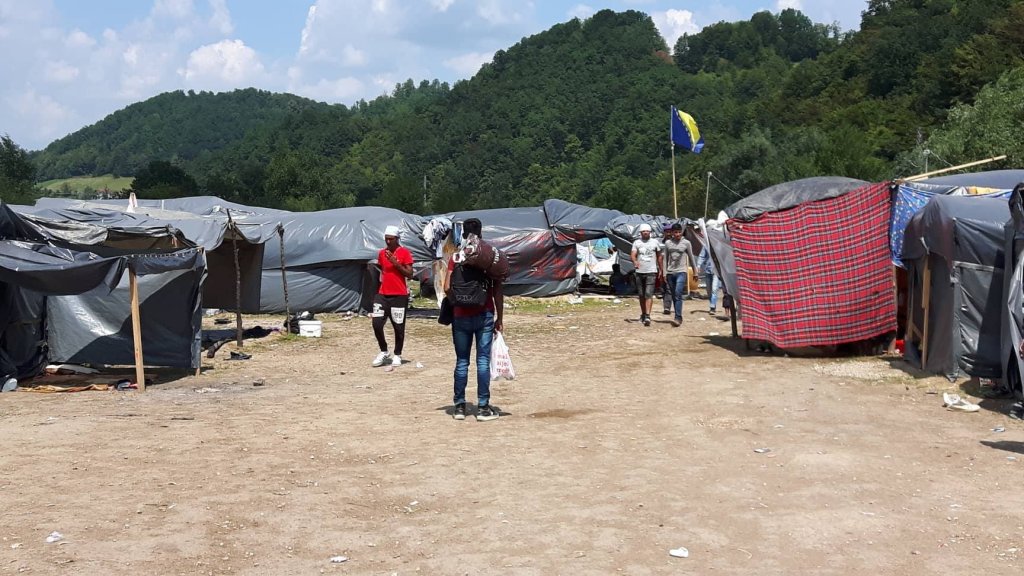 "When we enter Croatia, they refuse to give us asylum, they beat the migrants and destroy their phones. It's been almost five years since I left Afghanistan and I've been here now for about two or three months. The situation is very bad. There's no food, no water."

Another refugee trying to get by in the camps is Milad Kamkar, an Iranian migrant who says he left Iran three months ago in hopes of finding employment in Europe. But like all the others, he remains stuck in Bosnia.

"When the Croatians deported me back to Bosnia they beat me with a stick. My entire body was in pain. The dispersed pepper spray into our eyes. I could not see. I could not breathe."

The Croatian Police has not responded to these allegations.

Chief of Mission in Bosnia at the International Organization for Migration (IOM), Peter van der Auweraert, told InfoMigrants: "I cannot confirm whether these stories are true or not. But many migrants have also told us stories of violence at the border. Our official position is: The police have the right to control the border area but they don't have the right to use violence against migrants - even if they are crossing the border illegally." In 2016, the Balkans route was officially closed in a bid to manage the refugee crisis. But many migrants hoping to reach the European Union were already on their way. Earlier this year, they appear to have discovered a new path:

Migrants take a southern route through the Balkans, walking from Greece to Albania, Montenegro and finally Bosnia, where they hope to enter the European Union at the Croatian border. At least 8,000 migrants have been registered in Bosnia since the beginning of this year, according to official statistics.

The country has created several camps for migrants but is struggling with creating sufficient capacities to accommodate all of them. With camps overflowing, living in tent cities near the border is often the only alternative for many migrants.

In certain parts of the country, the situation is even more dire: there, migrants don't have the resources to build tents. They have no alternative but to sleep on the streets.