What you need to know: The German-Spanish migrant deal

Berlin and Madrid are demonstrating unity with a joint agreement on returning migrants from Germany to Spain. Now Germany wants to seal similar deals with other countries. But what exactly does it involve?

The agreement stipulates that Germany is allowed to send certain migrants arriving in Germany straight back to Spain. This only applies to a small number of people, though: Migrants coming to Germany via the three border crossings with Austria that are currently subject to controls. Refugees who are picked up there and who have already applied for asylum in Spain can be sent back to Spain if this is done within 48 hours.

Those arriving in Germany are checked using the Europe-wide fingerprint database Eurodac. Every refugee is supposed to be registered on this as soon as they arrive in Europe. Unaccompanied minors are excluded from the migrant return agreement.

Isn't this already determined by the Dublin Regulation?

Yes, in principle it is. According to the Dublin Regulation, a migrant is supposed to become the responsibility of the country where he or she is first registered. As a rule, it should be the country where they first set foot on European soil. If a refugee comes to Germany and it turns out that he's already registered in Italy, the German government could send him back there. However, European law also requires it to consider whether it makes more sense for a refugee to stay in Germany — if, for example, they have relatives living here.

Many EU countries consider the Dublin Regulation impracticable. The transfer of migrants from one country to another is extremely time-consuming. Furthermore, many migrants are not even registered at the point when they first set foot on European soil. During her visit to Spain, Merkel too described the Dublin Regulation as "unworkable." In theory, the chancellor said, under the Regulation "no migrant or refugee would ever arrive in Germany." However, she went on to say that the legal situation did not correspond to reality, which meant that "a fair distribution system" was needed. 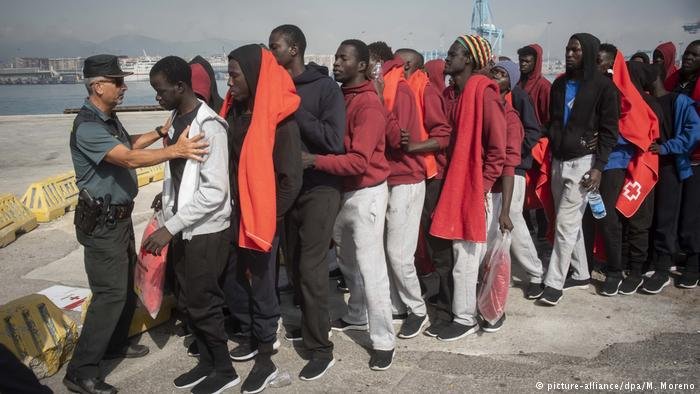 What does Germany expect from the agreement?

Reports quoting the Federal Interior Ministry state that in 2017 an average of five people per day were apprehended at the three controlled border crossings between Germany and Austria who had already applied for asylum in another EU country. Only a fraction of this number had applied for asylum in Spain.

There are no official figures to substantiate this, but there are figures detailing Germany's transfer applications under the Dublin Regulation. Berlin makes these applications if it considers that a migrant is already another country's responsibility. In the fourth quarter of 2017, only slightly more than 5 percent of such applications by Germany were made to Spain. According to the news portal tagesschau.de, 32.7 percent were addressed to Italy.

Nevertheless, the new agreement does have a certain symbolic value. Germany's grand coalition government has been arguing for months about how to deal with migrants. The German Interior Minister, Horst Seehofer, wanted to turn refugees away at the German border even without a migrant return agreement, but this was opposed by Merkel.

Horst Seehofer is currently negotiating with Greece and Italy to reach similar agreements— but it's not proving easy. Although Spain hopes that Germany will invest more money in protecting the EU's borders, it didn't directly ask for anything in return for taking the refugees. Athens and Rome, however, are already making demands. As things stand, they are only prepared to enter into a joint arrangement of this kind if, in return, Germany accepts some refugees from their countries; for example, those who wish to join family members already in Germany.

Seehofer, however, has rejected this proposal. "There's no point in us signing this, because the German public would not understand it if we were to accept more than we turned away at the border," he said. A spokesman for the Interior Ministry said that, in spite of the difficulties, an agreement with Greece was in sight — but there was no immediate prospect of a deal between Berlin and Rome.