The UN Refugee Agency UNHCR said it had "reliable reports" suggesting that criminals were "spotted at disembarkation points and smuggling hubs, using vests and other items with logos similar to that of UNHCR" aimed at luring vulnerable refugees.

UNHCR said in a statement that its information came from "refugees who report having been sold to traffickers in Libya, and subjected to abuse and torture, including after having been intercepted at sea.

UNHCR spokesman Babar Baloch told the AFP news agency that it still remained unclear if the fake UN employees had succeeded with its efforts to trick migrants and refugees who subsequently faced abuse, saying the agency was still investigating:

"We want the authorities to go after these people," he said. 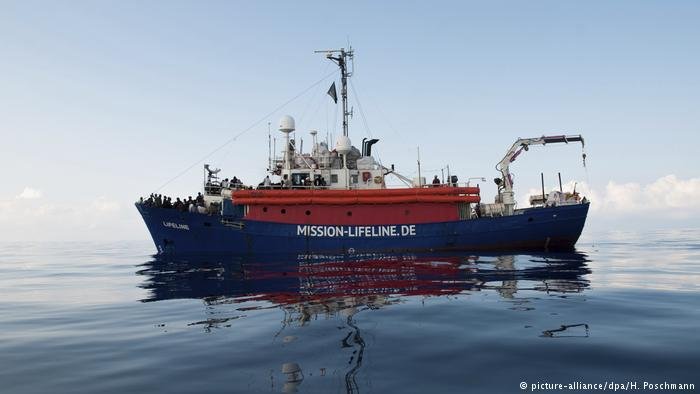 Libya: a dead-end for migrants

Following the fall of longtime dictator Moammar Gadhafi in 2011, Libya plunged into lawlessness amid competing groups claiming to rule over the North African country.

Libya's officially recognized and UN-backed Government of National Accord in Tripoli faces additional challenges posed by human traffickers, taking advantage of the turmoil and putting mostly sub-Saharan African migrants coming to Libya on route to Europe at greater risk.

UNHCR said it had received reports of "unspeakable atrocities" committed against migrants in the streets of the Libyan capital, including rape, kidnapping and torture. Last year, there were widespread reports of migrants being sold off as slaves or being held hostage for ransom.

Those that do manage to get on boats and dinghies trying to cross the Mediterranean Sea to Europe face perilous journeys, with drownings and dramatic rescue attempts by various organizations and governments being reported almost daily. Several countries meanwhile have closed their borders to non-governmental rescue boats.

Many of those in peril at sea are sent back to Libya, where the UNHCR has set up official disembarkation points alongside its partners "to provide lifesaving humanitarian and medical assistance."

"Once the smuggled passengers are back on land, the Libyan authorities transport them to detention centers, managed by the Directorate for Combatting Illegal Migration," the agency said.

"UNHCR teams are also present there to monitor the situation, aid and identify the most vulnerable in order to try to find solutions, especially in third countries."

UNHCR also pointed out that the situation for refugees and migrants in the Tripoli area has significantly worsened in recent weeks amid heavy clashes. Many refugees in areas close to the clashes have been detained and are at risk of being a collateral damage if rockets hit the centers.

Thousands meanwhile have escaped reportedly detention centers, in a desperate attempt to save their lives. Last week, the agency helped evacuate some 300 migrants from the Ain Zara detention center to another a few kilometers away, with staff risking to get caught in the crossfire.

UNHCR stressed that it is opposed to the detention of refugees and asylum-seekers and called for alternatives to detention to be put in place, including the immediate use of the Gathering and Departure Facility in Tripoli, which would serve as a platform to find safety in third countries. The facility has the capacity to host 1,000 vulnerable refugees and asylum-seekers and is ready for use.