For the past two years, volunteers from the Midis du Mie association have been meeting with minors who have been denied access to the child protection system because they can’t prove that they are underage. The volunteers try every day to best meet the needs of this particularly vulnerable population - from handing out meals to helping with administrative issues and accommodation.

It’s 10:30 am and several volunteers from Midis du Mie are meeting near the Demie 75, as they do every day. The evaluation center for unaccompanied refugee minors is managed by the Red Cross and located at 5 rue du Moulin Joly in the 11th arrondissement of Paris. It is there that young migrants are evaluated - in particular, their age - before their file is sent, or not, to the Social Assistance for Childhood (ESA). Young migrants are often rejected because they are deemed to be adults.

This morning, Agathe, the group’s founder, leads the search. The aim is to identify disoriented teenagers who need help. Half an hour ago, Agathe's phone rang. It was Yama, a 17-year-old Afghan who was sleeping at the Porte de la Chapelle with his 15-year-old brother, Sharif. The boys were noticed by a volunteer who spotted them in the street and gave them Agathe's number. She arranged to meet them.

Both boys had had meetings at the Demie on September 20th for a second evaluation of their age - which was inconclusive. "They asked us a lot of questions about our journey from Afghanistan to France," Yama recounts. "It was a Thursday; they told us to leave," says the young man, who seems not to have retained much else from the exchange. He hands Agathe a photocopy of his Afghan identity card and explains that the juvenile court requested the original. After the ESA’s denial of support, Yama and Sharif would like to - as the law allows - take legal action.

"You need an address in Paris where the original can be sent," Agathe explains, giving him the address of the daily reception center for migrants that Doctors Without Borders opened in Pantin, which regularly works with Afghan migrants. 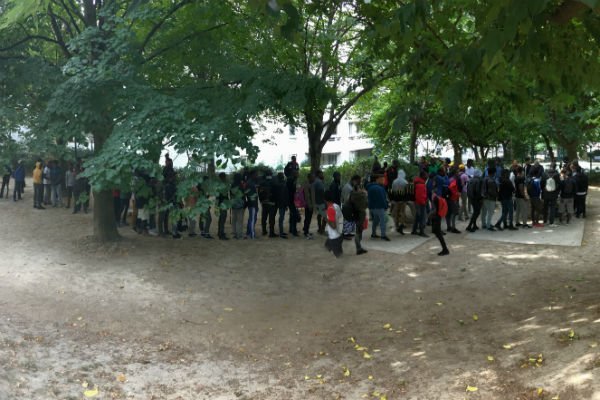 "These young people are lost,” Agathe says. “I often see that they don’t understand the documents the administrators give them, the papers they have in their hands. One can’t forget that they are teenagers. I intervene to help them understand. I explain different solutions available to them, I direct them to other resources when they exist."

Agathe knows the administrative procedures by heart from all the time she has spent looking for solutions for young migrants. She stops to take a picture of the photocopy of the boys’ identity cards. "You never know," she says, "If they have their belongings stolen or if they lose their papers, I want them to know that they can always find them somewhere."

Hot lunches on Thursdays and Fridays

A few meters away, Abdul, a 16-year-old Ivorian, doesn’t dare join the line that has formed at the door of the Demie. He looks cold. He tugs on the sleeves of his sweater, his fist clenched and arms crossed close to his body. Agathe approaches him. "I'm hungry," he tells her.

"You'll come eat with us," she answers.

"I slept outside Denfert-Rochereau," adds the young man, holding back a sob.

"Come eat with us, you will be in better shape for your meeting," Agathe responds.

Her organization serves hot lunches to young migrants every Thursday and Friday in the garden on rue Pali-Kao, just 700 meters from the Demie. "We're here to help you,” she says to reassure a visibly anguished Abdul. “You're not alone. It's okay. Don’t worry."

A little further down in the neighborhood, at Place de la Fontaine au Roi, another fifteen young men are gathered. They, too, have been rejected by the Demie. They have the right to one night in a hotel, and then they will have to fend for themselves. They are waiting for their rooms in a nearby hotel to be ready at 4 pm.

"You're not going to wait here until 4 pm,” Agathe tells them. “Come and eat with us—it’ll be good for you to know where the garden is." The second group of boys joins the first, and two volunteers take them to the garden on rue Pali-Kao to eat. 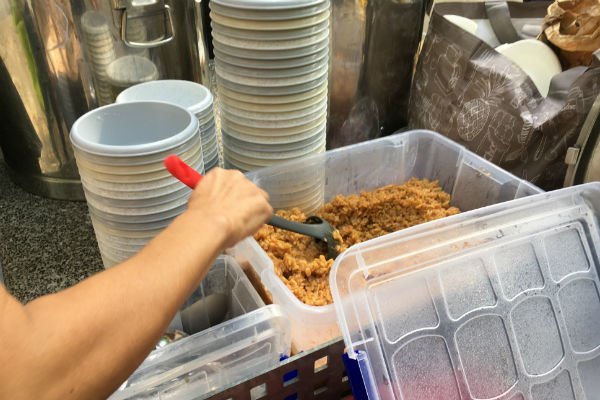 Agathe founded Les Midis du Mie two years ago. Before that, she would come alone to try to help in any way she could. "I spent my time going back and forth to the local bakery, which generously gave away the food they didn’t sell," she says. Agathe, who splits her time between volunteering with migrants and a teaching job, ended up launching an appeal on Facebook, where she was soon joined by friends and residents of the neighborhood. Today, Midis du Mie has more than 300 members, but the support comes mainly from 30 active, committed people.

An opportunity to check in and unburden oneself

Paul is one of them. This neighborhood retiree has been in the garden every Thursday and Friday at lunchtime for a year and a half. Every time he comes, he brings eight to ten kilos of bananas, that he carefully places on a ping-pong table.

The Midis du Mie and the guardian of the public garden have agreed that the group can serve meals as long as they leave the area clean when they leave. This Friday, two large pots of lentils and steaming rice await the youth, along with lassi, cans of fruit juice, bread and pastries.

The teens who followed Agathe from the Demie are met by about sixty others who are coming out of a French course given by volunteers from Paris of Exile at the Couronnes library every Thursday and Friday morning. There are also young adult migrants, who used to eat lunch in the garden when they were minors and whose situations have not improved. They continue to come for a hot meal and some solace. While the volunteers prepare to distribute the food, the young people gather, talk and play football.

The lunches are also an opportunity to check in or just to unburden oneself. Agathe is in great demand. One teenager asks her for mobile credit so he can call his parents in Guinea for a few minutes. Another shows her the strap of his backpack. After being mended several times, it has finally yielded under the weight of all the things he carries every day. 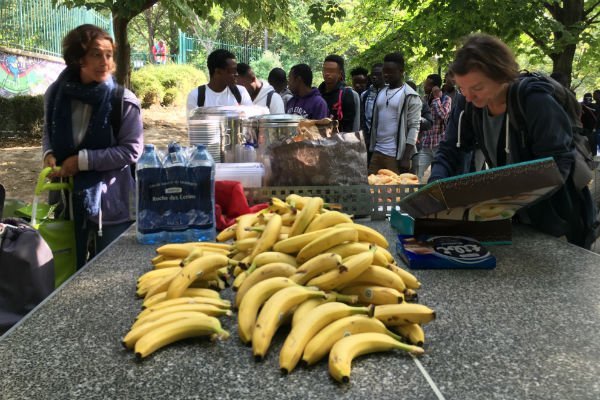 Volunteers try to find places for teens to sleep

The group has also managed to find housing for some minors who could not prove they were underage and therefore were refused child protection support; generally with individuals who agree to open their homes, Agathe says. Today, Abdul's case is of particular concern to her. He seems very fragile in the run-up to his interview at the Demie. The young Ivorian waits like the others to enjoy his hot meal. Some teenagers go to pick up friends who are sleeping on the street. It’s not yet 12:30 pm and nearly 150 people are in the garden waiting to eat.

The meal of the day was prepared by a partner organization. That’s not always the case. Often volunteers have to arrange for the food themselves. Thanks to precise planning, other volunteers, who aren’t here today, are responsible for collecting warm clothes for the approaching winter, or personal hygiene products for the homeless youth.

The meal is coming to an end. Agathe gives Abdul a phone and a French SIM card so that he can keep them informed of the outcome of his interview and get in touch when needed. He calls that afternoon. The Demie didn’t consider his file because he is already registered in another department, the Val-de-Marne.

The teenager had wanted to try his luck in Paris, but without a place to stay in the French capital, he is panicked. A volunteer from Midis du Mie who lives in the neighborhood offers him a hot shower and gives him some clothes. Agathe eventually finds him a bed for a few nights with another family. What will happen next is unknown.

Paris of Exile French classes - Thursday and Friday from 10 am to 12 pm at the Couronnes Library, 66 rue Couronnes. Metro: Couronnes (line 2)

The duty office of the Juvenile Office of the Paris Bar Association, dedicated to unaccompanied migrant minors - Thursday from 2 pm to 5 pm at the Tribunal de Grande Instance in Paris, in the forecourt, 75017 Paris. Metro: Porte de Clichy (line 13)

The legal duty office in French of the Adjie (accompaniment and defense of young foreigners) - Monday from 6 pm to 9 pm and Saturday from 9 am to 1 pm at 49 ter Avenue de Flandres. Metro: Stalingrad (line 2, 5 and 7) / Riquet (line 7)