The Aquarius has docked at the port of Marseille, carrying with it uncertainty about the future of migrant rescue missions. But even as the humanitarian vessel ends operations indefinitely, some see hope on the horizon.

The privately-operated Aquarius rescue ship arrived on Thursday in the port of Marseille in southern France after Panamanian authorities revoked its registration.

Without a flag, the Aquarius is unable to operate in a legal capacity while in international waters. Before losing its flag, it was considered the last privately-operated ship conducting rescue missions on the Mediterranean.

"It means the Aquarius is going to be in the port of Marseille for a certain period of time while we go through the administrative details of getting registration for the vessel to be able to head back out to sea," Nick Romaniuk, rescue coordinator for SOS Mediterranee, told DW.

UPDATE: The #Aquarius has arrived in #Marseille for port call. We call on #European governments to allow us to continue our lifesaving work by issuing the Aquarius with a flag. We are determined to be back in international waters in the Central #Mediterranean as soon as possible. pic.twitter.com/pZwqTLRQ5o

SOS Mediterranee, which operates the Aquarius, has called on EU member states to recognize the value of citizen-led humanitarian missions and allow the Aquarius to register. But none have offered a way forward yet.

Human Rights Watch and Amnesty International pressed European leaders in an open letter published on Wednesday, saying authorities must "do everything in your power to ensure the Aquarius and its crew of professional, capable and committed rescuers can continue to save lives at sea."

"Deciding not to offer registration to the Aquarius would be tantamount to endorsing a deliberate strategy to obstruct legitimate humanitarian assistance to human beings at risk of drowning in international waters off Europe's coasts." 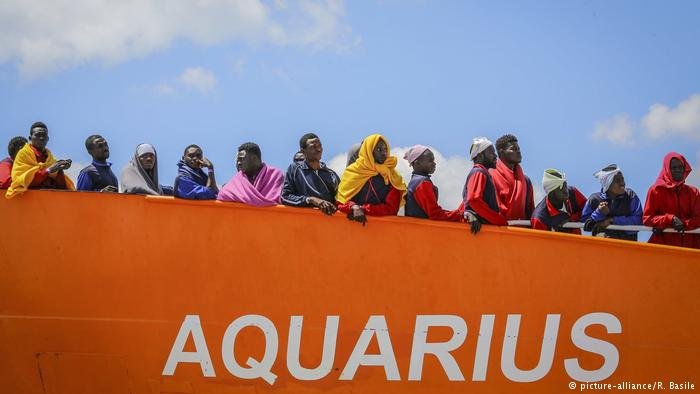 Merits of a flag

However, the Aquarius isn't the only privately-operated rescue ship that is in legal limbo. Others, including the Sea Watch and Proactiva Open Arms, have been docked in Malta since earlier this year.

Alexander Proelss, director of the Institute for Legal Policy (IRP) and maritime legal scholar at the University of Trier, told DW that there are several obstacles in the way for these humanitarian vessels.

"Depending on where the ship is registered, it receives the respective national flag as approval. As such, only the flag state can enforce the rights of the ship," said Proelss.

"Some rescue ships, such as the Sea Watch registered in the Netherlands (and operated by a German NGO), can provide accurate documentation. But until the Maltese authorities have clarified all questions with the country, the ship remains blocked (in Malta)."

Proelss noted that the situation could be more difficult if a vessel is registered as a "pleasure craft." Pleasure craft — also known as pleasure boats — are vessels meant for personal use, such as family trips or recreational activities.

"Some NGOs have made a serious mistake because they registered these ships as pleasure craft," Proelss told DW.

But organizations have refuted the logic, saying there isn't another option. In August, Sea Watch cited a letter the Dutch government sent to Maltese authorities showing that the registration was "in order."

"The ship is registered as a non-commercial motor yacht (pleasure craft) as this is the most suitable registration for the ship in common understanding of Sea Watch and the Dutch government," Sea Watch said at the time.

"There is no ship class and no general regulations in place for Search and Rescue vessels. Still the ship holds a class certificate and is fully entitled with the Dutch flag."

Last of the rescue ships

As the Aquarius was preparing to dock in the port of Marseille on Thursday, SOS Mediterranee's Romaniuk told DW that they were receiving distress signals from vessels off the coast of Libya via Maltese and Italian authorities.

"Since 2014, there has been a gap that needs to be filled and the Aquarius is there for that. But this is being hindered right now by political maneuvering within Europe," Romaniuk said. "The knock-on effect of that is people are dying, which is unacceptable."

But even as the Aquarius concluded its operations for now, an Italian-flagged ship was making its way to the coast of Libya. Italian lawmaker and leftist leader Nicola Fratoianni said the Mare Jonio must now "fill the lack of rescue assets in the Mediterranean."

The #MareJonio is on its way! In cooperation with #Mediterranea we are back at sea, to keep a sharp lookout and to challenge the European policy of letting people drown. Updates will follow here soon. pic.twitter.com/gHPaOQTbfO

More than 17,000 migrants have died attempting the dangerous voyage to Europe across the Mediterranean since 2014. That year, migrants making the crossing surged, triggering what would be dubbed a migration crisis in 2015.

Since then, several EU member states have been critical of irregular migration, including Italy, which has prevented search and rescue vessels carrying migrants from docking at the country's ports.