How the EU's resettlement plan is failing to meet its goal

The EU has set up various measures to curb unauthorized migration. One of them is offering more legal pathways to the European Union with the help of resettlement pledges. As a data analysis shows, this is not working.

Migration into the EU is one of the bloc's most important political topics. In an attempt to tackle unauthorized migration and prevent human trafficking, the EU has defined several measures since the refugee crisis began in 2015. One of them was to prevent people from illegally entering the European Union by offering more legal pathways into the EU.

These legal pathways come in the form of resettlement plans to safely move people from non-EU countries to EU countries. The first one started in July 2015, offering resettlement to 22,500 people and ultimately resettling 18,563.

In September 2017 European Commission President Jean-Claude Juncker set the agenda for a new plan: urging member states to pledge to resettle an additional 50,000 people by October 2019. "A particular focus should be put on resettlement from North Africa and the Horn of Africa, notably Libya, Egypt, Niger, Sudan, Chad and Ethiopia, whilst ensuring continued resettlement from Turkey, Jordan and Lebanon," an accompanying policy paper states.

The plan included a deadline for an initial milestone: By October 2018 "member states [are] to ensure that 50 percent [of the 50,000] are effectively resettled."

In March and May 2018 the EU released progress reports. Each member country had to provide the number of resettlement placements it would offer and how many had already been used. The resulting report from May is unambiguous: Only 8 percent of the planned resettlement placements were fulfilled, far off pace for the 50 percent milestone intended to be reached five months later.

The EU did not issue more progress reports in the subsequent months. DW repeatedly reached out the European Commission's Directorate-General of Home Affairs and Migration for newer figures — without success. DW then asked for the latest available data from all member states that had pledged to resettle people; half of the countries contacted provided this information.

Taking into account these newly provided figures and relying on the old ones for countries that did not offer more current information, the fulfillment rate rises to 26 percent, or 13,176 people — still well under the goal of resettling at least 25,000 people by the end of October 2018. 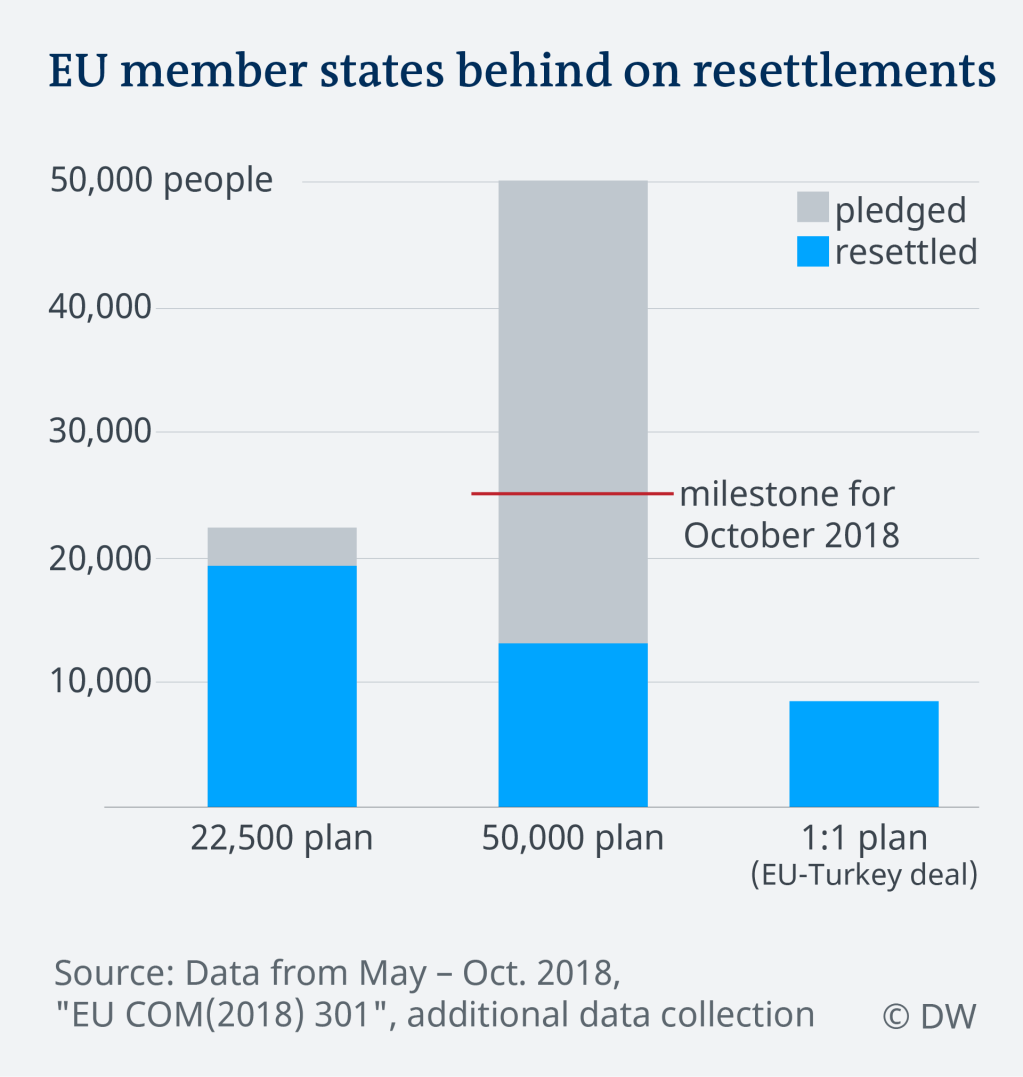 In theory, the plan to resettle 50,000 people is a separate measure from the EU-Turkey deal (also called the 1:1 plan), under which migrants who arrive illegally via Turkey are to be returned there and a Syrian refugee currently in Turkey would be sent to the European Union. However, many countries count people resettled under the Turkey deal toward the goal of 50,000. Even when combining the number of people resettled under the EU-Turkey deal with the number resettled according to the 50,000 plan, the fulfillment rate is not 50 percent, but 43 percent.

When confronted with this fact and asked for comment, the European Commission's Directorate-General of Home Affairs and Migration suddenly provided a new figure: 15,900 people have been resettled under the plan so far, according a spokesperson, who cited "data collection exercise carried out in mid-October."

Pointing out that the number of resettled people is rising year by year, the Commission spokesperson added: "Good progress therefore continues also under this scheme and we are confident that the ultimate target [by the end of October 2019] will be reached."

The spokesperson said a breakdown by member state is not yet available. Thus, relying on previously collected data, Ireland, Slovenia and Lithuania are the only countries that have met the 50 percent mark, with the UK and Sweden closely following. France and Germany, which, at 10,200 each, have pledged to resettle the highest number of people, are lagging on meeting their commitments.

The EU Commission did not respond to DW's question as to why member states are behind on resettling people. A spokesperson from the German Interior Ministry explained that Germany is behind on resettlements because of the delayed government formation following the general election in 2017. 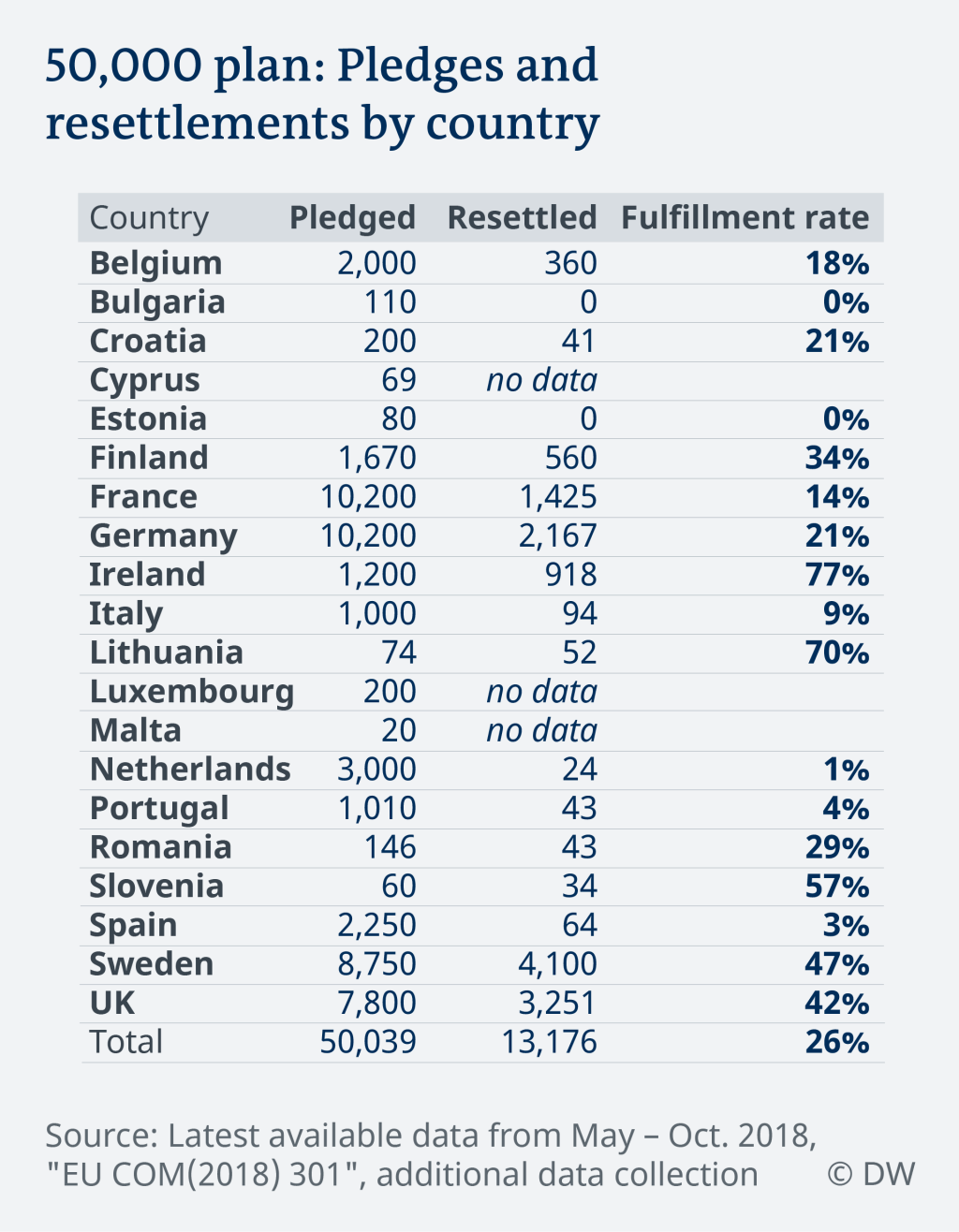 Even if all of the pledges are fulfilled by the final deadline at the end of October 2019, they fall far short of the demand: Since the plan to resettle 50,000 people was established in September 2017, the European Border and Coast Guard Agency (Frontex) detected 166,894 attempts by people to enter the EU without authorization — that's over three times the number of people member states have pledged to resettle.

"It's a multilayered problem, but, in a nutshell, the realization of resettlement pledges depends on political will, public support and the capacity and logistics to realize resettlements," said the sociologist Hanne Beirens. She is an associate director of the nonprofit research think tank Migration Policy Institute Europe and focuses her in research on the EU's policies on asylum, migration and human trafficking.

UNHCR creating a pool of resettlement candidates in non-EU countries

The UN Refugee Agency (UNHCR) works on the ground in third countries to identify people who are eligible for asylum protection and resettlement. "This could be people who cannot be returned to their home country, or people who cannot be integrated where they are, because of ethnic clashes between the refugee population and the local population, or when they need physical treatment they cannot get in their current location," Beirens said.

This way the UNHCR establishes a pool of candidates for the resettlement plans. In the second step, countries inform the UNHCR of how many people they intend to resettle and the agency then suggests the individual cases of particularly vulnerable people.

"Sometimes the resettling countries have very specific requests, like 'we prefer women with children,'" Beirens said. "The UNHCR then sends dossiers of cases that match these requests. Based on these dossiers, the countries can then accept or decline to take these refugees. The UK, for example, selects refugees almost entirely via dossiers."

Many other countries send delegates to interview people selected for resettlement, asking about their knowledge of their potential destination country and their ability to adapt to it.

Cost of resettlement hard to calculate

The EU supports the plan with €500 million ($560 million) — member states receive €6,000-10,000 for each resettled person. Whether this sum is enough to cover the real costs of resettlement is hard to tell. "There is no reliable data available on how much it costs to resettle a refugee," Beirens said. "The figure of €10,000 just magically appeared at some point."

Researchers at the Migration Policy Institute Europe found that few details were available for how the EU calculated this sum or which parts of the resettlement process the money is intended to cover.

"It can be enough if you have already a functioning system in place like in Germany or Belgium," Beirens said. "But, if you don't have the machinery already in place, then it costs a lot more to set it up well. And then the €10,000 per person only covers a small part of it."