When a community football team needs recruits and a group of refugees needs a new home, they turn out to be a perfect fit. But first, there is ignorance and fear and prejudice to be overcome. That’s the basis of an Australian film featured in this year’s Global Migration Film Festival. The theme of building understanding through sports works well on screen, but in a climate of growing Islamophobia, how well does it work in reality?

There are countless examples of sport bringing people together and helping to break down cultural barriers.

Take Mo Salah, the Liverpool footballer who’s stolen so many British hearts. A North African and a Muslim who kneels on the pitch in prayer every time he scores a goal, Salah is loved and respected because of it. At a time when police figures show a rise in the number of hate crimes against Muslims in the UK, for a lot of people, Salah is a force for unity and tolerance.

Or take the thousands of programs being run across the globe at a community level, aimed at bringing people from diverse backgrounds together to communicate in a language they all understand - sport - and to start to understand each other in the process.

The magic that sport can weave against racism and fear is one of the themes of The Merger, an Australian film showing as part of the Global Migration Film Festival. Set in a fictional rural town, the film is about a struggling football team (Australian football, not soccer) that recruits some refugees in order to boost both player numbers and funding for the club. One of these refugee players is Sayyid, who has fled the war in Syria, leaving his brother and mother in Aleppo.

For Ahmad Al Rashid, who watched The Merger recently at a screening in London, the film brought back memories of his own experiences. Ahmad is also from Aleppo, and football - the world game in his case - also helped him to feel a sense of belonging after he arrived in Britain as a refugee.

"Life in the UK [is] very different from Syria. I spoke English so I didn't have that barrier, but it was the little things that were isolating. I joined a team with people from all over the world," says Ahmad, who works with the International Organization for Migration. "It was through sport that the UK gradually went from being a foreign land to being my adopted home." 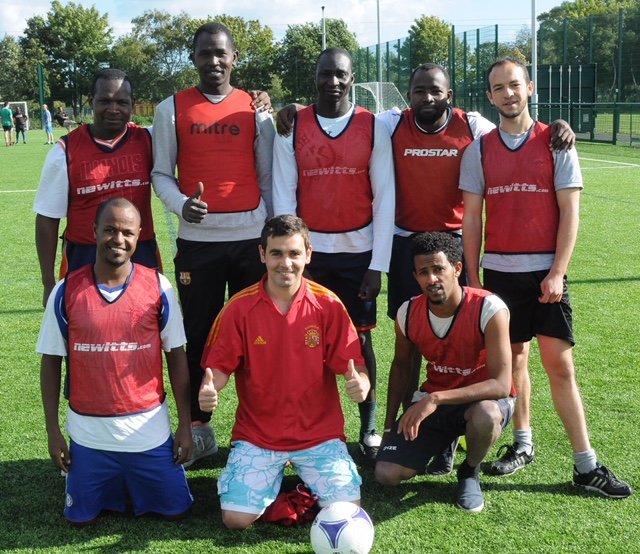 The character Sayyid in The Merger goes through this process too, eventually he is joined by his wife and daughter and they move into their own house, complete with garden gnomes.

However, the film doesn’t suggest that problems are solved just by kicking a ball around. Sport is the means to get people working towards a common goal, cooperating and communicating with each other. Communication increases knowledge and understanding, and this decreases prejudice.

“Why do you hate refugees so much?,” the ten-year-old boy at the center of the story asks his grandfather.

The Merger is a feel-good film, so in the end the bigots are enlightened and there’s mutual understanding and acceptance (grandfather, local footballers) and belonging (refugees). That’s the movie version. Off screen, however, understanding through sport is not always that simple.

While Liverpool fans in the UK chant that they will become Muslims if Mo Salah continues to score goals, another young Jamaican-born player, Raheem Sterling, has started a national debate about the persistence of racism in football.

The 24-year-old Manchester City winger was racially abused during a match at the weekend and later indicated on social media that he was used to it. In the same post, he accused the media of fueling racism. 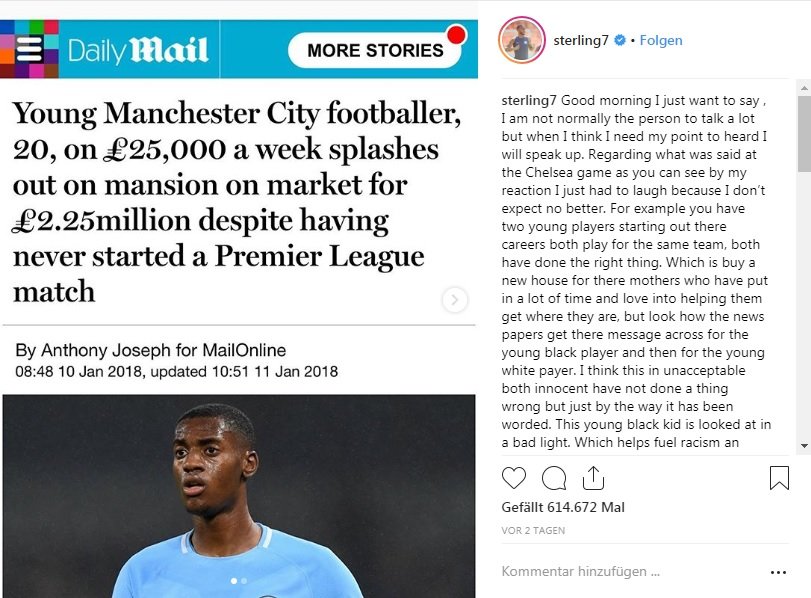 Shaista Aziz, who spoke at a screening of The Merger at a Migration Film Festival event in London, has welcomed the young player’s "brave" comments about racism. "It forces open a conversation about who we are as a nation," the Oxford City Councilor says.

A similar, more limited conversation took place in Germany this year when Mesut Özil quit the national football team over claims of racism. During World Cup warm-up games, Özil faced criticism for having his photo taken with the Turkish president. In a statement, he said he felt that in the eyes of the German Football Association "I am German when we win, but I am an immigrant when we lose."

The same thing applies to fans’ willingness to accept the successful sportsperson, but only as long as they play that role, as Aziz says: "They are more open to welcoming players like (Mesut Özil) when they’re on the pitch, but I’m not so sure if they’re welcoming them when they’re not on the pitch," she says. "The point is, you can be Raheem Sterling or Mo Salah and still face racism and Islamophobia in your day-to-day life."

Will this ever change, so prejudices are as easily fixed as they are in The Merger? Being a football fan, Aziz says things have improved since she, as a Muslim woman, had to worry constantly about her personal security before going to a match. The progress has been achieved partly through grassroots programs like the one she now advises, the Diversity Football League. The League, which kicked off at the end of September in Oxford, is trying to break down ethnic and socio-economic barriers to community participation in sport. It has mixed teams as well as teams representing different nationalities, including Syria, Eritrea and Nigeria. For now, Albania tops the League table.