Abdelfeteh feels trapped, though he is not actually in prison. He has the right to stay in Italy, he has a job and he speaks good Italian. But due to the Dublin agreement, he feels like he is tied to where he first arrived. Increasing police checks in Italy remind him of his home country, Eritrea. He feels stuck between a rock and a hard place.

Abdelfeteh arrived in Sicily seven years ago. He was on one of the first small boats to arrive from Libya as war broke out there in 2011. "I am a cultural mediator, and I work with migrants," he laughs, as though noticing the irony that for most people, he too is a migrant. These days he is based in Catania in the east of Sicily but he has worked on rescue ships in almost all the ports in Italy.

He is quick to point out that it was never his aim to come to Italy or Europe. He was working quite happily in Libya when war broke out. "I just needed to escape, I wasn’t thinking about arriving."

After finishing high school in Eritrea, his destiny was the military. A service "without end," he clarifies. "That's why I left Eritrea. They don’t respect human rights there. I wanted freedom, I wanted to find out more about the world." There is not much future for the country's youth. There is only one TV station and one newspaper and the country closed down its only university years ago when it received independence. First Abdelfeteh went to Sudan, but he "didn't like it much there," so he moved on to Libya. Abdelfeteh is tired. Tired of talking, tired of talking politics, tired of smiling when people compliment him on how "well integrated," he is. "Why do I care about how well integrated I am?" he asks bitterly. "That has not been the overwhelming aim of my life, to be well integrated!" He's angry, about the instrumentalization of migration by politicians, not just in Italy but across Europe. "The result is that the government has made the people think that migration is the only problem Italy faces. It is obvious that when you make people believe that then they will vote for someone who tells them they will stop all migration."

"We are all experiencing the consequences of these political decisions," Abdelfeteh sighs. He feels no one cares about the fate of hundreds of thousands of migrants.

In his role as a cultural mediator, he spoke with some of the 177 migrants aboard the last big boat from Libya to arrive in Sicily in August 2018. 97 of those migrants were Eritreans. The migrants were picked up by an Italian coastguard patrol boat, the Diciotti and then held for days in Catania’s port whilst the Italian government argued with Europe about who should take responsibility for them. Eventually, the migrants were disembarked, taken in hand by the Catholic Church, Albania and Ireland. Then Sicilian prosecutors announced they would investigate Interior Minister Salvini for "illegal confinement, illegal arrest and abuse of power," for his refusal to allow the migrants to disembark. 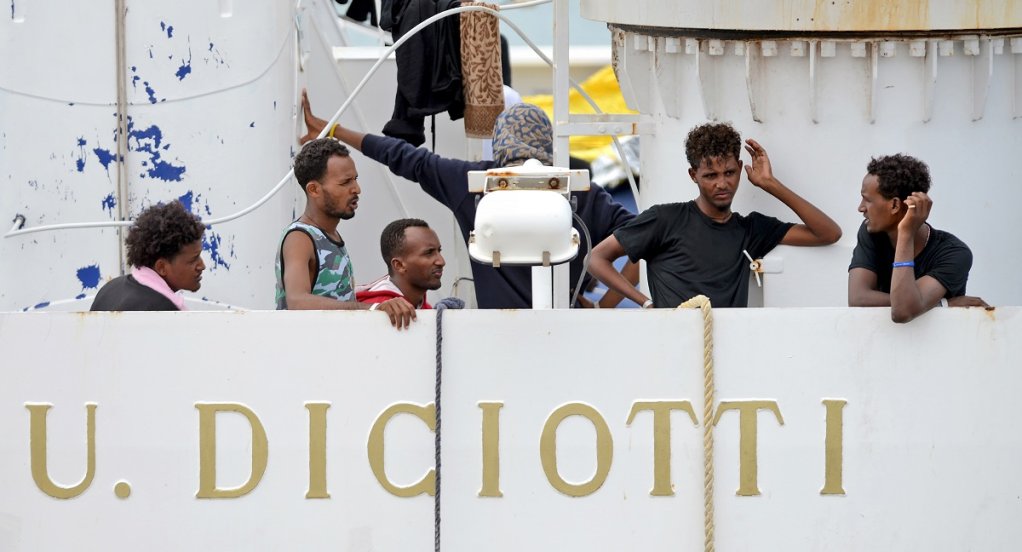 Abdelfeteh meanwhile listened to some of their stories. "Everyone was asking on the boat, what will happen to me if they don’t let me get off this boat? Will I be sent back to Libya?" he says. Angrily he points out, "there is a constitution here which says that you can't just hold people like that on a boat in a port."

These kinds of stories make Abdelfeteh wonder if Italy is also losing sight of the kinds of human rights that its own constitution purports to uphold. "I spoke with them on the boat, every person had their own story. I can’t even tell them, some of them were horrible. Some men had been living underground for several years. One guy couldn’t see anymore, he couldn’t stand the light, because he'd been kept underground and hadn’t seen the sun for so long."

'Almost everyone has been sold'

The women on the boat, he said, had also been imprisoned, sold, kidnapped and raped, over and over again. "You know everyone talks about having been sold. This is the normality now." He compares it to asking someone whether you want ketchup or mayonnaise with your chips, these people don’t even blink twice when they recount their stories. Abdelfeteh, whilst recognizing that this seems to be the new normal, is outraged that he should be forced to feel like this. "Is this the state of things to which we have been reduced?" he asks rhetorically.

"Politicians are playing with our ignorance, and they are also playing with our desires," he points out astutely. "They are proposing what people fear and what they want. It is a very confused time and it makes me wonder whether I am really in the right place after all these years."

Caught in a trap

He feels sad, caught in a trap. Abdelfeteh rolls his eyes, "thanks to the Dublin agreement!" He explains, yes, he has a permit to stay in Italy and he can work. To all intents and purposes, things seem to be going well. But unlike the majority of young Europeans, he can't just decide to go and work in another European city. For that he would need any prospective employer to apply to their embassy in Italy for a permit to move his residence status to their country. He fears the whole procedure could last two years, "and which employer is ready to wait two years for anyone?" he asks, defeated. "You have to stay where you requested asylum. It is a huge prison from which I can never escape." In Africa, he concludes, he knew where he was living wasn't going to respect his rights, but he was able to move and leave when he didn't like things. Now, in theory his rights are respected, but he can't move so easily. And the climate, he thinks, has worsened. "Just a couple of weeks ago, I was walking with a friend of mine. A car comes along and they hit me on the head with a bottle. No one did anything. That didn’t happen before."

Abdelfeteh is not the only person to feel caught in a trap. Some of his work involves supporting those migrants who have been expelled from the centers. They have asylum status but no where to stay. Once they acquire the status, they lose their place in the first welcome centers. In winter, in order to find somewhere warm to sleep, many head to northern Europe to apply for asylum in for example Germany. They know that they will be refused and sent back to Italy, but for the four or five months the process takes, they will be given food and shelter. “This,” says Abdelfeteh, “is one of the saddest things I have seen in my life.” Now he too is wondering whether his road should lead him back to Eritrea. Not yet, it is still too dangerous, he concludes, but he is hopeful now peace with Ethiopia has arrived that there will be some new dawn in Eritrea too.

"This morning I was stopped twice by the police, whilst I was at the train station for work. Later, in an Eritrean community house, the police stormed in and filmed us, without a permit and without explaining what they were doing." This didn’t used to happen here, observes Abdelfeteh. He concludes with another question: "are we in a country which respects our rights? When people ask me what to do, I tell them, leave, because I worry that things here will not end well."