There is a new culinary project on the streets of Warsaw that helps locals and refugees alike. With the universal language of food, people come together to learn something new about each other.

A new culinary project attempting to break stereotypes opened near Warsaw's Marriot Hotel, one of the most emblematic buildings in the Polish capital. But breaking stereotypes is not the only goal for this project. Hidden in a street filled with all kinds of different foods, Conflict Kitchen offers the fare from the regions of the refugees who work there.

It's a cold night in the middle of December and a dozen friends are celebrating their Christmas dinner here. So it's a busy time in this multicultural kitchen where Pola Sutryk usually works as a main chef. But tonight she comes with extra support: Eva Fligiel, a guest cooker who has been "helping time to time", for two months now.

Cultures, scents, flavors and colors are mixed in several dishes. A salad with white beans, hummus and a Middle East cake with dates are some of the specialties for tonight. The menu normally includes soup, a main course and a dessert. 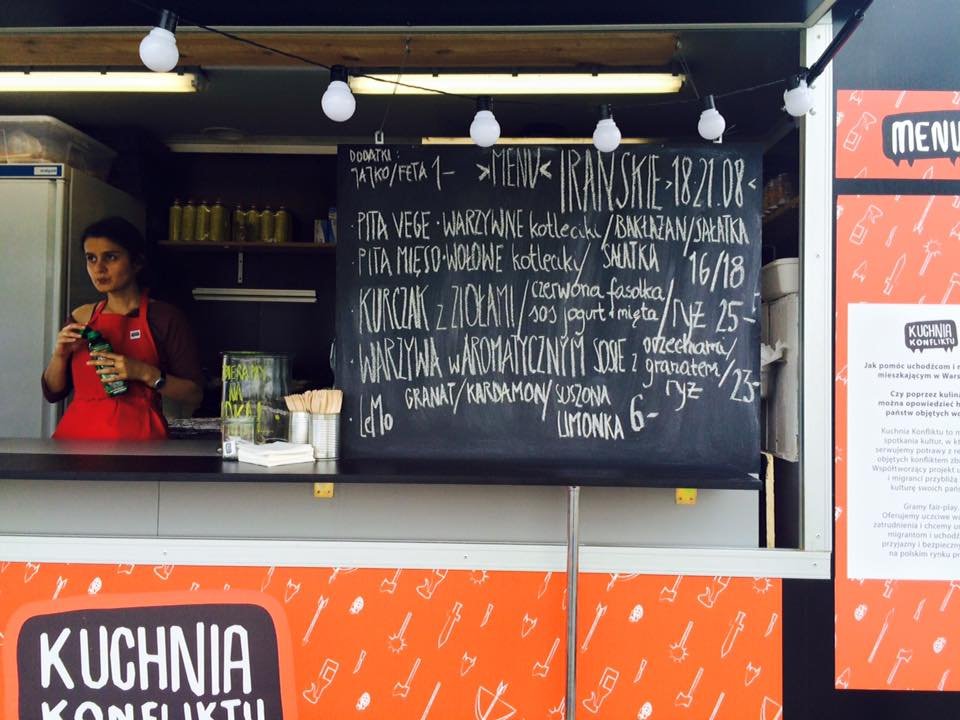 "We don't have recipes, each person in the kitchen brings their ideas," explains Fligiel. Although they repeat the most popular dishes, that are all vegetarian or vegan, "we try to change them everyday."

The team is composed of about ten people and the "huge majority are refugees" says Fligiel. Actually, they are eight women and two men coming from Tajikistan, Iraq, Afghanistan, Chechnya, Ukraine, Belarus and Nepal.

"We are supporting migrants coming from regions that are in conflict and where human rights violations persist, such as Chechnya, Tajikistan and Syria," says Jarmila Rybicka, founder of Conflict Kitchen.

"There are many negative stereotypes of refugees," she says. "These people want to integrate, learn the Polish language," but, "refugees don't have really an integration support system: The state doesn't provide language courses, they're supposed to do it on their own," she complains.

For this reason, Conflict Kitchen's founder uses food as an educational tool and creates "an opportunity to meet and change minds naturally for people who are afraid of differences."

"Everybody likes food," says Rybicka. "These people cook their cuisine, they are proud of it, they are happy to share it and it brings happiness back to others," she adds. The idea started with a WhatsApp chat created by a small group of activists to help new arrivals in Warsaw with employment and accommodation issues. She invited some people from the group to cook with her. "It was very natural, we started to do big cooking together," explains. "They are not professional cooks but they have very mixed sets of skills."

The gatherings created a lot of interaction, she explains, which paved the way for the next step: a food truck project where Polish cookers joined during the summer of 2016. "We rented it for 3 months," she explains. The following year, the collective converted a container in a mobile kitchen and as they did the previous year, they organized documentaries screenings and concerts. Like this, participants could "get food and personal messages."

Finally this year the permanent place was opened in this central location "because of the safety of the workers." It also allows for "the chance to meet more people. We try not only address leftists activists but people that not are socially active," Rybicka says.

More than food: a starting point 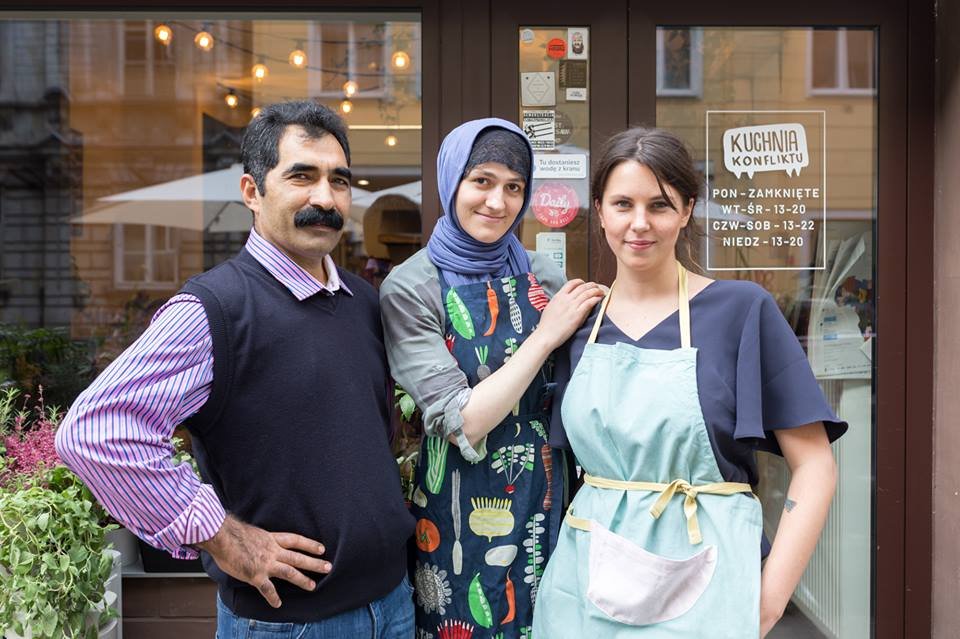 Refugees in Poland face challenges in accommodation and employment, they struggle with financial stability and discrimination. “Refugees need support all year long, not only during the summer,” Rybicka explains.

Giving people a chance to work all year long in a stable environment could help them build their self-confidence, Rybicka asserts. "We are the first to address the issue of employment in Poland”, she says.

At Conflict Kitchen, a fairly permanent team of around 10 people is employed. Migrants with little Polish language skills are given support on the job like Zura from Chechnya, who has been working with them for two-and-a-half years.

Conflict Kitchen also works with a lot of women with domestic and violence issues. And everybody works depending on their personal situation. For example, Hamsa from Algeria became an Arabic translator. “One year ago he was not totally independent," says Rybicka.

This was one of the reasons why Fligiel decided to be involved in this initiative. "It is a safe space to start something else, to practice the language and as a result for refugees to become more independent. In Poland this is very difficult because of the political situation with our right wing government," said Fligiel.

Although today "we are currently going a good direction and this place can run long term," Rybicka says the project is going in the right direction, it was a long journey to get this far. “I want governmental funding but it's very difficult in Poland. It was hard to have this space in the town. The city is the owner of this place,” said Rybicka. It took her two years to receive support from city council to rent the place for a lower price. Rybicka is already planning ahead. She would like to expand the project to other Polish cities and encourage businesses to hire refugees and encourage NGOs to promote the employment of refugees with disabilities.