Calls for mandatory X-ray age tests on unaccompanied minor refugees were rejected last year by German doctors. As an alternative, the Health Ministry is now launching a €1-million study into ultrasound testing.

Debate in Germany over mandatory age checks on unaccompanied minor refugees has drifted on and off the agenda for months. In practice, tests to determine a refugee's age currently differ from state to state. But discussions were brought to a halt last year when the German Medical Association (BÄK) rejected a proposal by the Health Ministry to introduce mandatory age checks using X-ray on ethical and medical grounds, calling it "an interference in their human welfare."

Now, in the search for an alternative, German Health Minister Jens Spahn is pumping €1 million euros ($1.1 million) into a study to find out if ultrasound can be used to determine people's age. A small, portable device, not much larger than a shoebox, has been developed by the Fraunhofer Institute.

"I can understand why doctors are reluctant to use X-rays when determining the age of young migrants," said Spahn. "But we need to determine age. Because this has a bearing on the asylum process and — when there is doubt — on legal proceedings. That's why we have to find a way to make this as minimally invasive as possible." 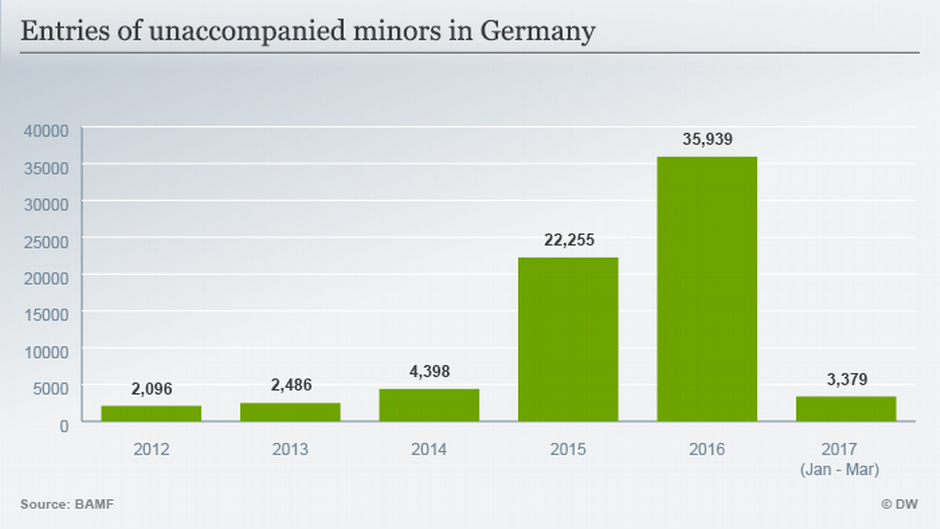 Reliability yet to be tested

Critics of the X-ray age tests warn that radiation technology could harm the body, and say the precision of results has also been scrutinized.

Certain carpal bones in the wrist are initially composed of cartilage at young age and ossify only gradually. The status of this development process, which is correlated with age, can be determined using X-rays, but the process doesn't happen at the same rate for everyone. As a result, an X-ray test of a hand bone can have a margin of error of up to three years; a person who claims to be 18 years old could be anywhere from 15 to 21 years old.

BÄK President Frank Ulrich Montgomery has welcomed the possibility of using ultrasound instead of X-rays, but told DW the reliability of the results has yet to be tested.

Even if ultrasound technology is proven to be more accurate than X-ray tests, Bernd Mesovic, head of legal policy at the refugee association Pro Asyl, still disagrees with the political debate in Berlin.

"The health minister is putting unaccompanied minors in the same category as criminals," said Mesovic, adding that mandatory age determination using X-rays is only allowed in the context of criminal proceedings or on medical grounds.

"If a few 19 or 20-year-olds who fled their homes are given the chance to be educated and integrate into Germany because they said they were a couple of years younger, this is better than the alternative which could result in their prospects being diminished," he said.

Syrian refugee Juody Yuon was one of the 70,000 unaccompanied minors who came to Germany between 2015 and 2017. On arriving in Passau, on the Austrian border with Germany, Yuon — who was 16 at the time — underwent an X-ray of his arm so that authorities could determine his age.

"I don't have a problem with the age tests," he told DW. "If someone has lied about their age, you don't know what else they might have lied about," he said, adding that each case should be considered individually.

Yuon, too, said the biggest problem lies in the precision of the current X-ray method. In his case, however, the test appeared to be carried out to confirm the age on his ID card.

The entire debate over mandatory age checks on unaccompanied minor refugees was first ignited by the murder of a 15-year-old girl in Kandel in December 2017. The suspect, Abdul D., a young man from Afghanistan, was sentenced to eight years and six months for the murder of his ex-girlfriend.

On arriving unaccompanied in Germany in April 2016, Abdul D. told authorities that he was 15. After the murder, however, doubts were cast and a report concluded that at the time of the crime he was at least 17 years and 6 months old, but probably already 20 years old. The district court ultimately decided to try him as a minor.

In other EU countries, mandatory checks already exist. In Belgium, for example, every asylum-seeker is checked if their age cannot be proven by documents. X-rays are taken of the teeth, the hands and the collarbone. In Italy, wrists are X-rayed, and in Sweden, knees and teeth are scanned using magnetic resonance imaging, though these tests are voluntary and are considered legal proof.