Leading employers in Austria are turning to refugees as potential employees despite the government’s anti-immigration policies. Economic growth in the country is steady but there is a lack of labor.

A special jobs fair in Vienna last week attracted bosses from leading employers in Austria such as the national railway OeBB to construction giant Porr, the postal service and Telekom Austria.

1,200 refugees selected and invited by Austria’s public employment service AMS attended the fair to network with companies and employers. Beyond filling vacancies at big companies, the fair was also aimed at "making smaller businesses aware of the potential" that refugees have, Johannes Kopf, head of the AMS, said.

The refugees invited to the fair were mainly Syrians and Afghans who had arrived in Austria between 2015 and 2016, AFP reports.

There are currently around 160,000 job vacancies in Austria. The country has a population of 8.7 million with a current unemployment rate of 4.9 percent. The government hopes to reduce the rate by 0.3 percent to 4.9 percent by the end of the year. Though economic growth was steady last year, the main stumbling block remains a lack of labor.

"There is an urgent need for more labor in almost every sector, from manufacturing to tourism," Karlheinz Kopf, the head of Austria's Chamber of Commerce explained.

According to official figures, 30,000 refugees in the country are unemployed, a third of whom are less than 25 years old. "These are people who can be trained and who have enormous potential," Kopf said, according to AFP.

The jobs on offer were relatively low-paid jobs. The national railway company had 500 positions available, the Hofer supermarket chain 400 and another 350 at the German retail co-operative Rewe and 200 at facilities management company Simacek. A prerequisite to finding a job, the employers agreed, was a good standard of German.

Gerhard Zummer, the head of training at the Austrian subsidiary of Siemens, said that his company had hundreds of vacant positions, ranging from electrical engineering to cloud technology. "The important thing for us is to attract good candidates. Whether they're refugees or not isn't important, we look at their skills and then we can train them internally," Zummer said. 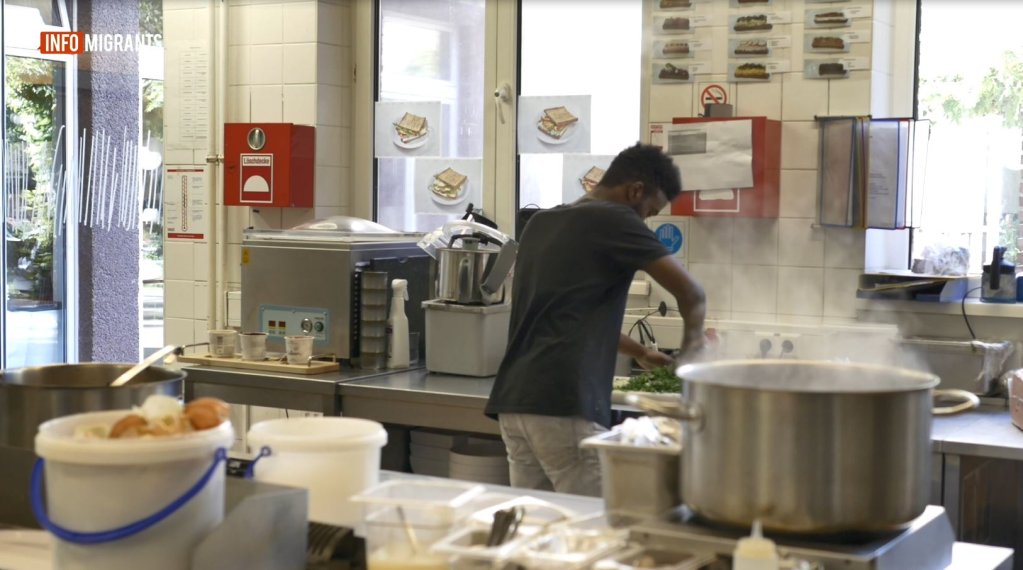 For refugees and asylum seekers with advanced qualifications, however, finding a job to match their qualifications can pose a challenge. "I was a maths teacher in my country," explains Sherihan, originally from Hassake in northeastern Syria. "But I can't get my degree recognized here so I'm looking for an administrative post," she explained in excellent German.

The head of the employment service Johannes Kopf meanwhile stressed that around 50 Middle Eastern doctors had been hired by Austrian hospitals. He conceded that many employers are apprehensive when it comes to hiring refugees. "It's true that in the first six months there is often a need for some adjustment," he acknowledged. "But after that period the returns are very, very positive. These are young people who are very motivated in their work."

The right-wing government headed by the conservative People's Party (ÖVP) in coalition with the far-right Freedom Party (FPÖ), has taken a hard-line approach to immigration. Recent measures have scrapped funds for language classes for migrants, and asylum seekers are barred from vocational training until they have obtained refugee status.

"We can only welcome the fact that the government is now trying to help refugees enter the world of work," the Federal Chamber of Labour (AK) noted in a statement commenting on the fair, which was government-sponsored.