In 2015, more than a million people fled to Europe, making it a record year for migration. But a lot has changed since then. As 2019 gets underway, fewer and fewer people are attempting to get to Europe by irregular means.

The Frankfurter Allgemeine Zeitung, a German newspaper, has collected statistics on the various migration routes and why they continue to shift and change. The following is based mainly on the FAZ’s analysis, published earlier this month.

The number of undocumented arrivals in Europe – by land and sea routes – has fallen by 95 percent compared with the summer of 2015. Those who are continuing to make the journey are trying new and different routes. 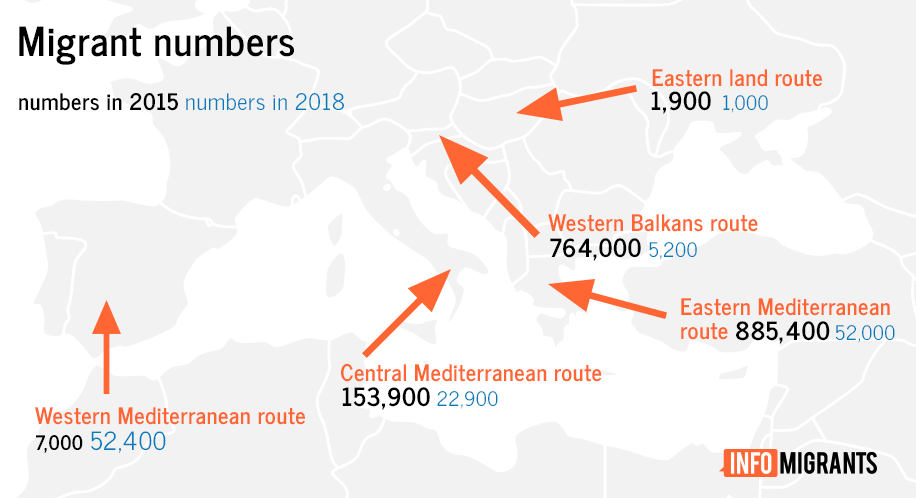 How the routes have changed

Since 2015, the Central Mediterranean route from North Africa has been the most popular migration route to Europe. Most migrants leave from Libya, aiming for Italy or Malta. There has also been a rise in the number leaving from Tunisia, according to the European border agency, Frontex. Most of the migrants come from sub-Saharan Africa and North Africa. In 2018, one third of migrants hailed from Tunisia or Eritrea.

In February 2017, EU leaders decided to boost cooperation with the Libyan government and the Coast Guard, in an attempt to stop people from leaving Libya. It worked, and by the middle of that year, the number using the Central Mediterranean route had already declined. In the first half of 2018, fewer than 16,000 irregular crossings were registered on this route – a fifth of the number in the same period the previous year.

The Eastern Mediterranean route between Turkey and Greece saw about 885,000 people travel to the EU in 2015 (17 times as many as in 2014). Most of the migrants were refugees from the Syrian conflict, followed by Afghans and Somalis. Many continued their journeys through Macedonia and the Western Balkans route. In 2017 and 2018, most migrants on the Eastern Mediterranean route came from Syria and Iraq.

In March 2016, Turkey agreed that it would take back migrants trying to enter Europe in return for billions of euros from the EU. The result was a sharp fall in the number of irregular arrivals in Europe. In 2017, 41,720 people arrived in the EU via the Eastern Mediterranean route – a drop of 77 percent on the previous year.

The Western Mediterranean route extends from Morocco to Spain. At its narrowest point, the strait is just 14 kilometers wide. The number of crossings via this route rose sharply in 2018. Over 52,000 people traveled this route between January and November 2018, more than twice as many as in 2017. 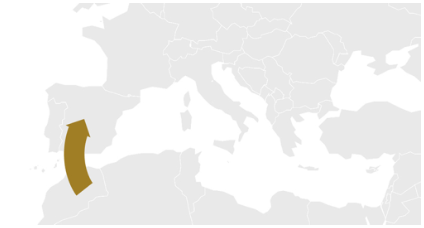 The Western Balkans route extends through Macedonia and Serbia to Croatia, Slovenia and Hungary. Migrants traveling this route often continue on to Austria and Germany. A large number of people from the Middle East took this route after crossing the eastern Mediterranean route from Turkey to Greece.

According to Frontex, the number of irregular border crossings on this route fell to 2,100 in the first half of 2018. In 2015, about 764,000 crossings were registered via this route. By 2017, the number had fallen to around 12,000, a drop attributed to the closure of the Balkan route and the EU-Turkey agreement. After Hungary, Slovenia, Croatia, Serbia and Macedonia closed their borders, migrants began opting for a parallel route from Albania via Montenegro or Serbia to Bosnia Herzegovina. A small number chose the route via Bulgaria and Romania.

The Eastern route refers to the 6,000-km land border between Belarus, Moldova, Ukraine and Russia and the eastern member states of the EU. The number of irregular crossings via this route is relatively small.

Where migrants go, and why

Worldwide, more than 68 million people have been forced to flee their homes, according to the UN refugee agency, the UNHCR. Of these, 40 million are internally displaced people who have remained within their own country.

At the end of 2017, the main countries of origin of refugees were Syria with 6.3 million and Afghanistan with 2.6 million refugees, followed by South Sudan, Myanmar and Somalia, excluding internally displaced people. 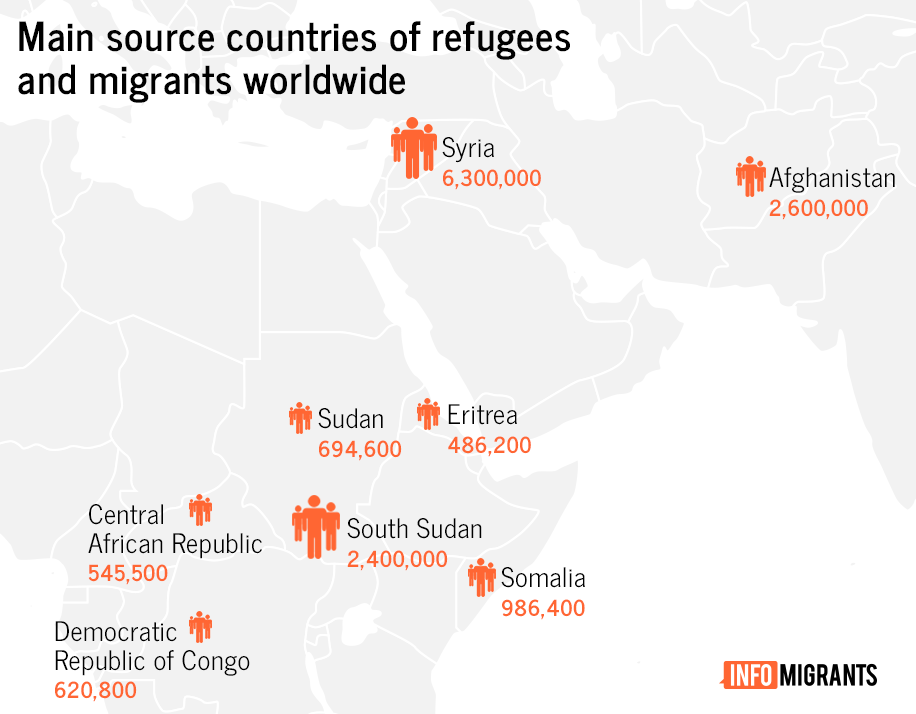 The main cause of forced migration remains war and violence. Over half of all refugees worldwide come from regions of conflict – Syria, Afghanistan and South Sudan. There is also armed conflict in Myanmar and Somalia. In Germany, more than 70 percent of registered asylum seekers have fled from war or violent crises, according to the German Federal Office for Migration and Refugees.

Another reason for flight is human rights violations. In at least ten countries worldwide, homosexuality and transsexuality are punishable with the death penalty. In many other countries the sentence is long-term imprisonment.

In addition, consequences of climate change – such as a lack of food and water – are forcing people to leave their homes.

Most refugees are not taken in by Europe. Developing countries host 85 percent of the world’s refugees. Turkey is the main host country, with a total of 3.5 million migrants, refugees and asylum seekers. Pakistan and Uganda have each taken in 1.4 million people. Germany is in sixth place with 930,400. 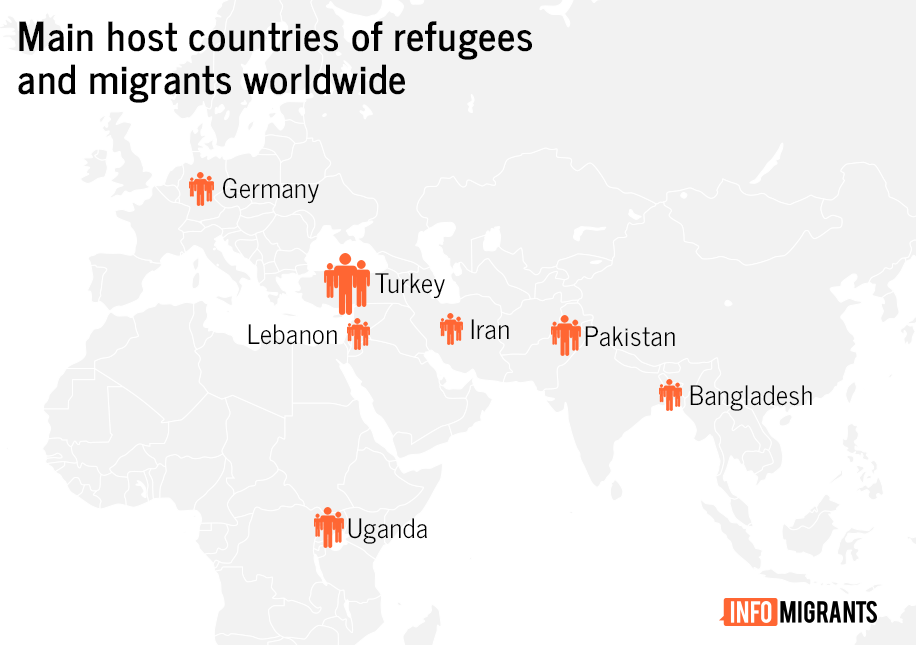