Human trafficking on the rise in Portugal

Portugal is in the midst of a crackdown on human trafficking after numbers of known victims more than doubled in the last few years. Most of the Portuguese cases are in the field of labor trafficking, with agricultural workers accounting for many of the victims.

The second largest group of trafficking victims are subject to sexual trafficking which accounts for 28 percent of known victims. The Portuguese authorities estimate that those numbers are just the tip of the iceberg with many more people passing unnoticed in the country.

A slight majority of trafficking victims are males; 57 percent against 43 percent of females. The vast majority are also adults, 83 percent compared to 14 percent of children. Most come from origin countries like Bangladesh, Pakistan, Nepal, India and Eastern Europe, (particularly Bulgaria and Romania) or countries in West Africa.

The Portuguese Immigration and Border Service (SEF), which carries out raids in sectors known for labor trafficking, called the problem "out of control." Acasio Pereira, president of the SEF, said that there was a particular problem in the Alentejo region, in the south-west of the country, according to Reuters.

The SEF have stepped up their raids in recent years particularly in agricultural businesses in rural areas which have a high turnover of seasonal workers. Many victims were found trapped on farms and exploited with little or no pay. The majority of them arrive in Portugal with the help of smuggling rings who advertise jobs through the internet.

When they arrive in the country, the victims are usually stripped of their documents, put to work and forced to inhabit cramped and unhygienic communal living areas; sometimes for years at a time until they have paid back the ‘debts’ incurred with the smugglers for their journeys to Europe. Isolated in rural areas with little or no Portuguese, it can be difficult for many to seek help.

Portugal has been fighting the problem since 2008 when it created an observatory on human trafficking, OSTH. In 2013, the country issued a third action plan against the crime. Penalties for human trafficking are relatively strict, between 3-15 years, depending on the severity and extent of the crime. Sentences can increase by a third if the judge finds extreme violence was used during the exploitation.

Since 2008 the Observatory has been trying to raise awareness about the issue, both among the Portuguese population and those trafficked. Information on their website is available in English and Portuguese and many of their campaigns ask the population to “wake up and report it” if they suspect victims of trafficking.

There are some reception centers for victims of trafficking set up by NGOs and the Portuguese state. Once discovered, the Portuguese authorities offer victims 30-60 days in a state reception center where they can decide if they want to collaborate with the authorities to crack the trafficking ring. If they do decide to cooperate, they are offered a residence permit in Portugal, on a case by case basis which is valid for up to one year and renewable thereafter.

However, collaboration with police and testifying against the rings could result in problems of protection for victims, as the US State Department pointed out in a report on the subject in 2018. 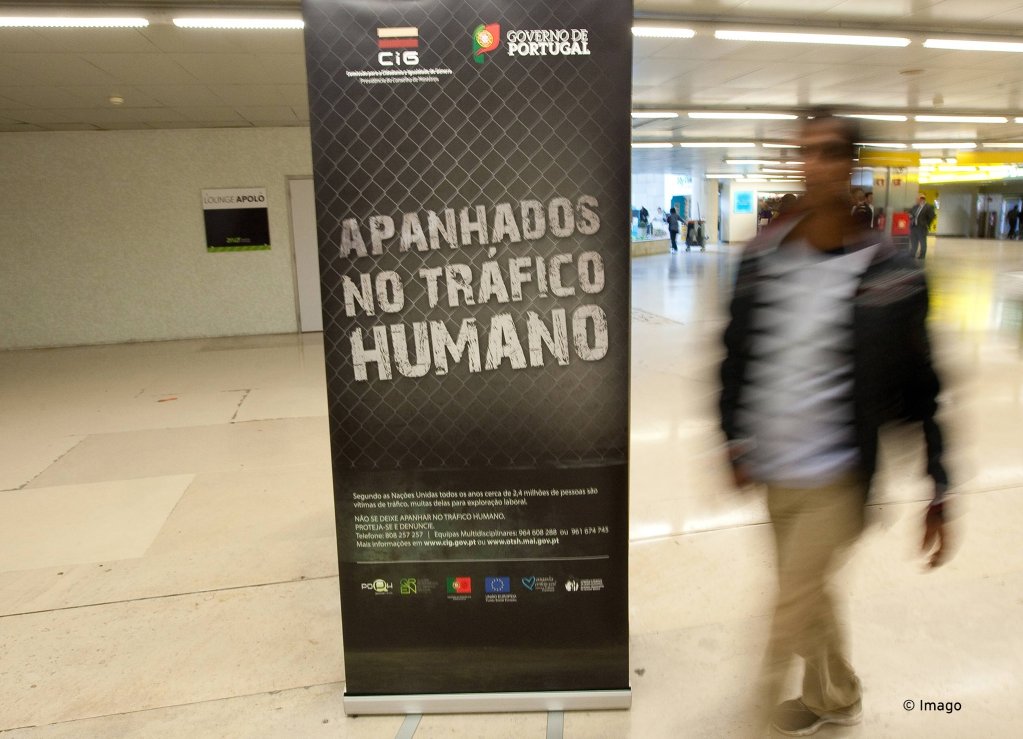 Portugal has been working with other European countries, including Austria and Bulgaria, Ireland, the UK and Romania to create a common European monitoring model of human trafficking and crack down on suspected trafficking rings. The government has also set up close bilateral partnerships with many former Portuguese colonies like Brazil, Sao Tome e Principe and Guinea Bissau to try and stop trafficking at the source.

The US State Department report found that in addition to the aforementioned agricultural sector, those working in construction, domestic service and the restaurant business are also often vulnerable to trafficking. West Africa was another source of women and children destined for sexual exploitation both within Portugal and the rest of the EU. The report noted that they were often brought to Portugal to claim asylum on false documents before being moved on to work in other EU countries.

Portugal had become “a new route into the Schengen area for Sub-Saharan African criminal networks trafficking women and children both for forced labor and sexual exploitation,” the authors of the report write. Children of Roma descent often fell victim to forced begging rings and forced criminal activity.

"Human trafficking is a phenomenon that really worries us,” Filipe Moutas, a police captain with Portugal’s National Republican Guard (GNR), told Reuters, whilst his team checked documents on a 40 hectare raspberry farm in Alentejo at the beginning of February. In this case, the police found that everyone’s documents were in order. The farmer, who didn’t want to be named, told the news agency that he doesn’t recruit anyone from abroad. Although Bulgarians and Thais were found among his workforce, the farmer maintained that the workers just turn up looking for work on his farm.

In a separate raid in the nearby town of Beja at the beginning of the year, police found 26 victims of labor trafficking and arrested six Romanians, the biggest bust of its kind to date. In fact, authorities carried out 4539 raids in 2017 and discovered 175 victims of trafficking. The President of the SEF admitted that the country needs more agents to really tackle the problem. Reuters reported that only 20 agents were available to cover the entire Portuguese interior.

As agricultural exports in Portugal have boomed, the population declines and more and more young people have left the rural areas to find work in the cities and abroad, the potential for exploitation has increased. Sectors like olive and strawberry picking rely increasingly on cheaper labor in order to meet demands. "That is where you find trafficking and exploitation,” Pereira told Reuters.