Has Hungary crossed a 'red line'?

A human rights organization in Hungary has renewed allegations that Hungarian authorities are leaving asylum seekers without food for long periods of time in order to convince them to give up on asylum claims and leave the country. When the Hungarian Helsinki Committee first made the accusation six months ago, Hungary denied the claim.

"Our clients received food for the first time in six and a half days, thanks to the emergency order Rule 39 from the European Court of Human Rights (ECHR)" stated the Hungarian Helsinki Committee, a human rights organization which provides free legal assistance to asylum seekers in Hungary, on January 13, 2019 in a tweet.

The ECHR confirmed in a statement that it had asked the Hungarian government to "provide the applicants with food during their stay [...] and to take all necessary measures to ensure [their] environment [...] complies with the requirements of Article 3 of the European Convention on Human Rights."

The applicants in this case were an Iraqi couple who had been left without food for several days while their three children were kept "in inhuman detention." The children were reportedly given enough food throughout the period, with the couple left to survive on any leftovers the kids couldn’t eat.

"The situation is Kafkaesque," András Léderer, an Information and Advocacy officer with the Hungarian Helsinki Committee, told InfoMigrants. The ECHR decision, he explained, related to the fact that the couple had to be fed but the court did not intervene in any way over their asylum claims in Hungary. Because of a law dating from July 2018, almost all applications for asylum in Hungary are rejected, Léderer added, on a so-called "inadmissibility ground." Almost all appeals on asylum decisions are also suspended in Hungary, pending a decision from the European Court of Justice as to whether the inadmissibility law complies with EU law.

Although Léderer can’t estimate numbers, what happens in practice is that those who have had their asylum claims rejected are offered the possibility of stepping from the Transit Zone through a gate into an open field. "The first couple of meters is still Hungarian territory," explains Léderer, "but step a few meters further and you are in Serbia." Because this is a Schengen border, those who take this way out of the Transit Zone are deemed to have crossed a border illegally. What happens to them in Serbia is then at the discretion of the Serbian authorities. Léderer thinks that Serbia is not happy about this practice, but because it wants to join the EU, it does not protest officially. 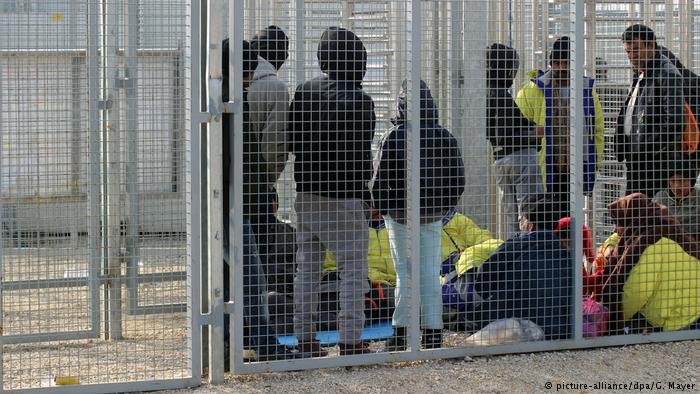 For the moment, the Iraqi family are the only ones to have been refused food, Léderer says, but the Helsinki Committee "expect more cases to follow." He notes that the media in Hungary seem to have avoided reporting on the issue, possibly because Hungarians might see their government as "crossing a red line." "There are not many red lines in Hungary, but starving people might be considered one," he says.

This kind of tactic is not new in Hungary, according to the Helsinki Committee. In August 2018 similar cases were reported, concerning eight Syrian and Afghan asylum seekers. At that time, Lydia Gall, Eastern EU and Balkans researcher at Human Rights Watch told DW: "The government has stooped to a new inhumane low by refusing food to people in their custody… This disregard for people's well-being smacks of a cynical move to force people to give up their asylum claims and leave Hungary."

Soon after, the Hungarian government, posted a response on the blog "About Hungary": "Those at Hungary’s border who have requested asylum and are awaiting the outcome of the formal procedure to receive asylum, are, first of all not in 'custody'. Our 'Transit Zones' are there to ensure that only those enter the EU who ha[ve] been cleared to do so."  The blog said that people seeking asylum "continue to receive food and shelter as they always have. They are allowed entry into the transit zones and fed and accommodated and that’s the case as long as they have requested asylum and their claim is under review."

In the same statement on the blog last August, the Hungarian government said it was spending over €2,200 per person per year on food and shelter for asylum seekers and those who have received permission to remain in the country. It also said Hungarian authorities "continue to fully uphold all of our formal, international obligations." At the end of their rebuttal it added: "However, Hungary is not responsible for those who have not requested asylum and those whose requests have been denied. There’s no free lunch for illegal immigrants."

This week, the German news agency DPA wrote that both the current case involving the Iraqi couple and the case in August, concerned refugees who had had their asylum claims denied in a first instance by the Hungarian authorities. DPA said that the Transit Zones were the only places where migrants could apply for asylum in Hungary. They added that these zones acted as "unofficial prison camps on the border with Serbia." Hungarian authorities deny the claims. Human rights organizations in the past have said that these kinds of tactics are to persuade asylum seekers to give up on claims and return to Serbia. Those who leave Hungary "voluntarily" automatically lose their status as ‘"asylum seekers."

In January 2019, in a State of Hungary address, Hungary’s Prime Minister Viktor Orban repeated his tough stance on migration, calling the opposition "a collection of pro-immigration politicians supported by George Soros and the EU."

Later, he warned that the EU had dangerous plans concerning migration. He said there were "four million migrants in Turkey" waiting for "a route into Europe to be opened," that this was being done by way of a European visa and that Brussels planned to take control of national borders away from individual states.

Orban accused bureaucrats in Brussels of wanting to transform the whole of Europe into an "immigrant continent." He said that migration brought more crime and warned that Europe’s Christian culture was going to be rapidly transformed. To address the threat, he proposed a plan which included financial incentives for Hungarian women to have children.

An article on the "About Hungary" blog published last month said the government’s position was that "illegal, mass immigration is a problem that affects Europe as a whole and poses serious security risks."

The government’s proposals, adopted last summer, include imposing complicated taxes on organizations seen as promoting or helping migrants and migration and investing the proceeds in border control. The Hungarian Helsinki Committee stated, when the proposals were first tabled, that the government was "using criminal law sanctions and prison terms as weapons against human rights defenders."

The European Union has already issued several official warnings to Hungary saying such proposals do not comply with international human rights treaties, or with the rules governing EU states.

Dunja Mijatovic, the Council of Europe’s Commissioner for Human Rights visited Hungary last week. In a statement, she indicated that Hungary was “backsliding” on human rights, women’s rights and refugee rights. In a tweet she urged the Hungarian government to “refrain from using anti-migrant rhetoric and campaigns which fan xenophobic reaction among the population."

Hungary should address many interconnected #HumanRights protection challenges including #CivilSociety space, #GenderEquality, #Refugee protection and independence of the #Judiciary

Read my preliminary conclusions after a 5-day visit: https://t.co/dg82IUU9Zp

Human Rights Watch posted in August 2018 that "Hungarian authorities do have binding obligations under multiple human rights treaties and norms that prohibit inhuman and degrading treatment [and...] includes providing them with food, water, hygiene, and medical needs."

In August, Lydia Gall from HRW said that it was "outrageous" that people should have to turn to the courts "in order to get a slice of bread."