'Education is a basic human right', but how many refugees and asylum seekers have access to that right in Greece?

Migrant children can find it difficult to maintain their access to formal education. For many, education is interrupted for several years at a time. For others, education can be a reason for migration, or an opportunity in the host country. In Greece, those who are seeking asylum or are refugees have a right to the country’s state education but a little less than half of refugee children are not yet signed up to formal education.

"Education is a basic human right," states Boris Cheshirkov, Associate Communication Officer with the UN Refugee Agency UNHCR in Greece. "Entering the classroom is about restoring hope and dignity and preserving childhoods as well."

The UNHCR and the UN children's emergency fund UNICEF have been working closely with the Greek government for the last few years to improve the access to education for refugee and asylum seeking children in Greece. And the numbers are improving, explains Cheshirkov.

At the end of 2017, the UNHCR estimated that around 8000 refugee and asylum seeking children were enrolled in Greek schools. By the end of 2018, that number had risen to 11,000. "This year, we have further indications that more children are participating in education so that number is likely even higher."

11,000 is a little more than half of all school-age asylum seeking kids. But the numbers vary depending on where the kids live. In mainland Greece, school attendance is higher for refugee and migrant children, for those on the islands, access to schools is still a challenge.

That’s why the UNHCR has begun to open "non-formal education centers" on the islands of Kos, Chios and Leros. The latest center to open was KEDU on the island of Kos. It opened its doors in April 2018 and today welcomes about 100 children a day, a third of them girls. The UNHCR says over 400 children have gone through its doors since they opened.

The center is administered by a UNHCR partner, ARSIS, a Greek-wide organization which offers social support for young people. Although it is called a "non-formal education center", KEDU has a curriculum and fairly structured lessons. They teach science, arts, craft, mathematics, geography, history, Greek and English. 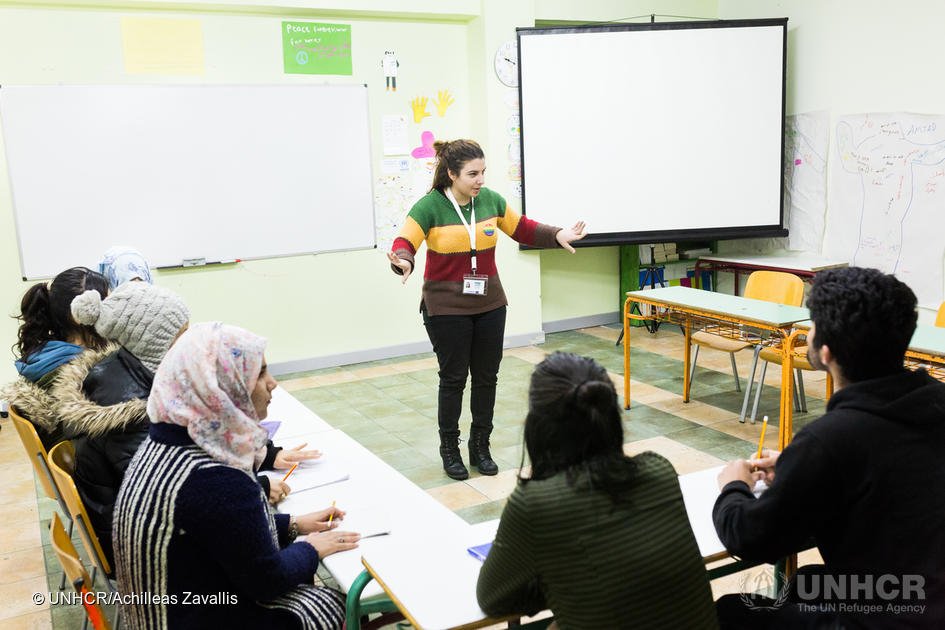 Acting as a bridge

The centers act as a kind of bridge to formal education. "Our aim is to create a safe and friendly environment for children who reside in the Reception and Identification Center on Kos and also to provide assistance while we prepare them to attend Greek public schools," explains Xenia Hatzidavid, KEDU’s coordinator in a UNHCR video. Most of the school’s employees come from the island. The video shows young teachers surrounded by smiling faces, teaching Greek, playing games, making murals and artwork and swinging their arms in the playground. The children look happy and fulfilled.

"What we notice is that children have the need to build their dream and what we are trying to do is show them that a dream may be something personal," Anna Lioliou, an art teacher says, in the UNHCR video as she helps one of her pupils stick a flower on her dream portrait. Dionysia Possa, a primary school teacher is there to make sure the children learn to communicate: "Our goal is [… for] children […] to be able to speak about themselves, to talk about important things which will help them in later life."

Dreaming of the future 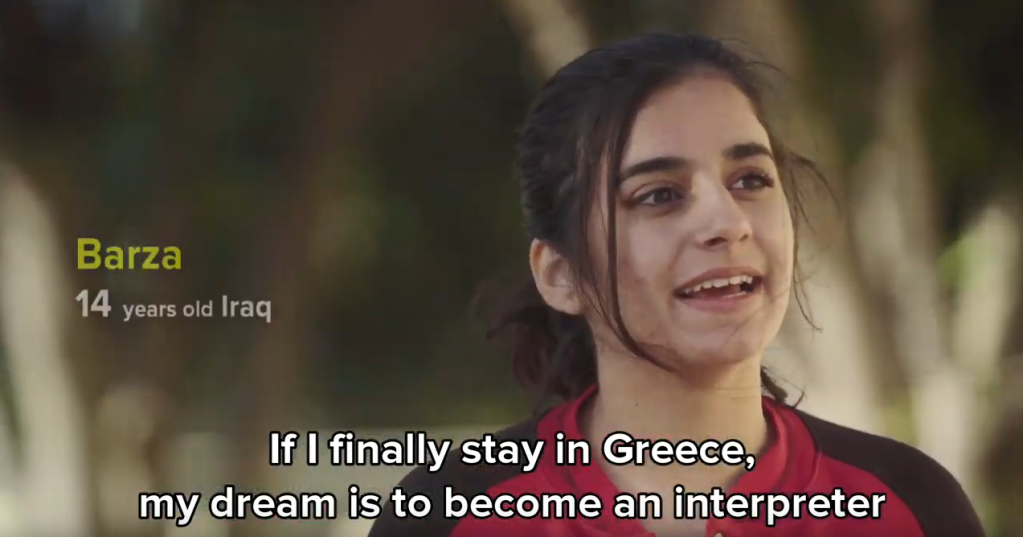 Many children never miss a day. Sixteen-year-old Mohamed, who fled conflict in Yemen, is one of those according to the UNHCR. "This is my second home," he says. "I love everything about school." Another 16-year-old, Aboubakar from Somalia seems pleased that he is being taught Greek and English: "They teach us that there is no discrimination among us," he says. Smiling Barza, a 14-year-old from Iraq, has already started to dream again too: “If I end up staying in Greece, my dream is to become an interpreter,” she shares enthusiastically to camera.

Some days the children visit local museums to learn about Greek culture and antiquities. A love of learning seems to be infused in the curriculum with everyone encouraged to participate to the best of their abilities. Mornings between 7-11 a.m. are reserved for younger children and afternoons are designed for the older teenagers.

Not just at KEDU, but at schools across Greece the government has also launched afternoon classes for refugee and asylum seeking children older than 15 to learn enough Greek to access formal education opportunities.

A right for all

According to the Greek Council for Refugees, the children of asylum seekers and children seeking international protection "have access to the education system under similar conditions to Greek nationals." Children who are granted refugee status by the Greek state, or who come from "turbulent regions;" or who have filed an asylum claim, or who are "third-country nationals residing in Greece, even if their legal residence has not been settled yet," can enroll in public schools even with incomplete documentation. They should be able to enroll within three months and they are offered one year of special language training which is provided "to facilitate access to the education system." 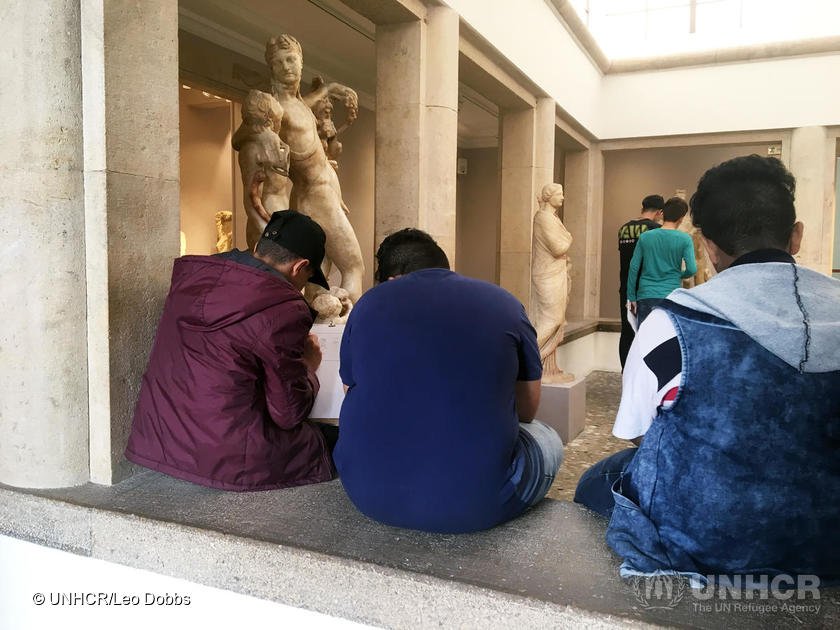 Although things are improving, there is still more work to be done so that all children have equal access to education, Cheshirkov explains. A research study carried out by the Greece Education Sector Working Group (ESWG) between February and March 2017 showed that 58 percent of the refugee children they assessed were attending some kind of educational activity. 41 percent didn’t attend any type of education at all and of the 58 percent attending some form of education, only 22 percent were in formal education.

The language barrier was the main reason for not attending mainstream Greek schools. For some families awaiting transfer to another EU country, education for their children in Greece was "not perceived as beneficial."

Another study by the ESWG found that less than half of unaccompanied minors in Greece were enrolled in schools against 56 percent who weren’t. (Their figures assessed 604 unaccompanied children in 29 shelters, 11 transit camps and 18 longer term shelters.) 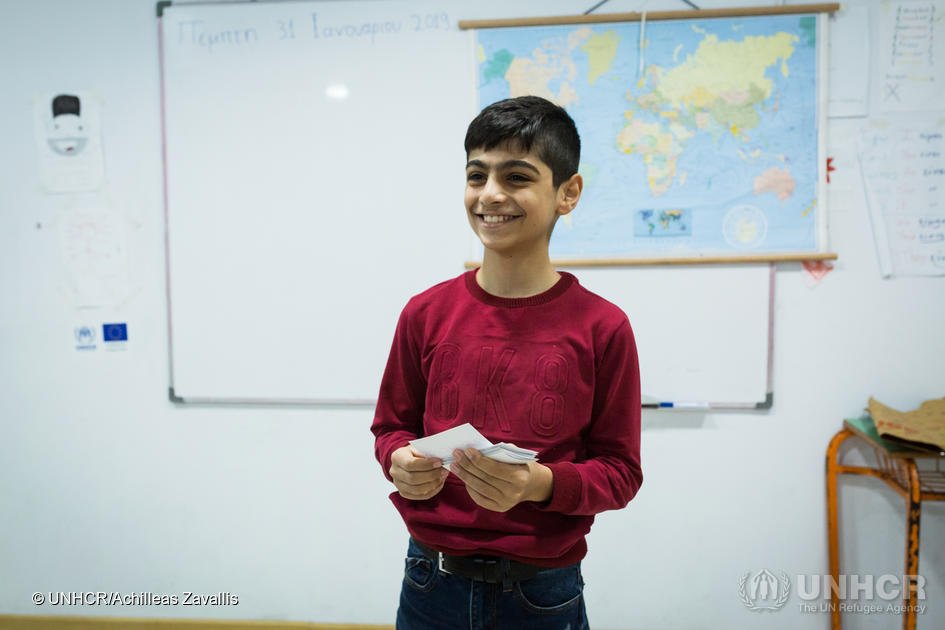 Cheshirkov explains that they are currently hoping to acquire enough funds to open another non-formal education center on the island of Samos. "The situation on Samos is quite dramatic. We have a site with just under 4,000 people but it was built for 700. Gaining access to a classroom helps [refugee children] integrate in Greece," explains Cheshirkov. "It's about regaining some normality." Over the last few years, there have been some protests against refugee children attending Greek schools. One of the most recent to be reported was on the island of Chios. In October 2018, over 1000 parents sent a legal notice to school principles on the island "calling for refugee children to have their classes in the island’s migrant reception center and not at the local schools,” according to the English online edition of Greek daily newspaper Kathimerini. The parents called upon the Greek state to "assume their responsibilities," and to cease expecting parents to "shoulder the burden [of refugee integration]."

Nevertheless, despite some protests, Cheshirkov feels signs from the Greek government are “encouraging” and notes that they are “investing in more educational spaces.” The children, he is convinced, see the value in learning. “The children we speak to almost every day […] are extremely happy that they are involved with activities and engaged in learning. It’s helping them build their dreams, to become a doctor, to become an interpreter.” He admits that at first, some parents were reluctant to send their children to school, but now almost all parents are keen to provide their children with some form of education after years of suffering little or no access to classrooms. He thinks that for many of the children themselves, gaining an education enables them to "gain some sense of control," over their lives.