Spain's 'Sea of Plastic': Where Europe gets its produce, migrants get exploited

The greenhouses of Almeria grow much of Europe's fruits and vegetables. The region's dark secret: Tens of thousands of migrants are apparently taken advantage of to fill supermarket produce sections.

The sun has yet to rise and two dozen migrant workers have already gathered at a roundabout in El Ejido, a town of about 90,000 people at the center of Almeria's agricultural industry. Every morning, groups gather in the hope that farmers will come and hire a few of them for a day of work in their greenhouses.

"It is the fifth day in a row that I've come here and no employer has shown up. It's very difficult to find work. We wait here every day from 6 a.m. to 9 a.m. and then go home," says Abderrazak, a 47-year-old migrant from Morocco.

Standing by his side is Lie Jallow, a former member of the Gambian police force.

"The living conditions and the opportunity for work in Europe is just like Africa. I had never worked in a field and I never thought I would have to work in a field in my life," he says.

The province of Almeria produces about 3.5 million tons of fruits and vegetables annually in more than 31,000 hectares (78,000 acres) of greenhouses. 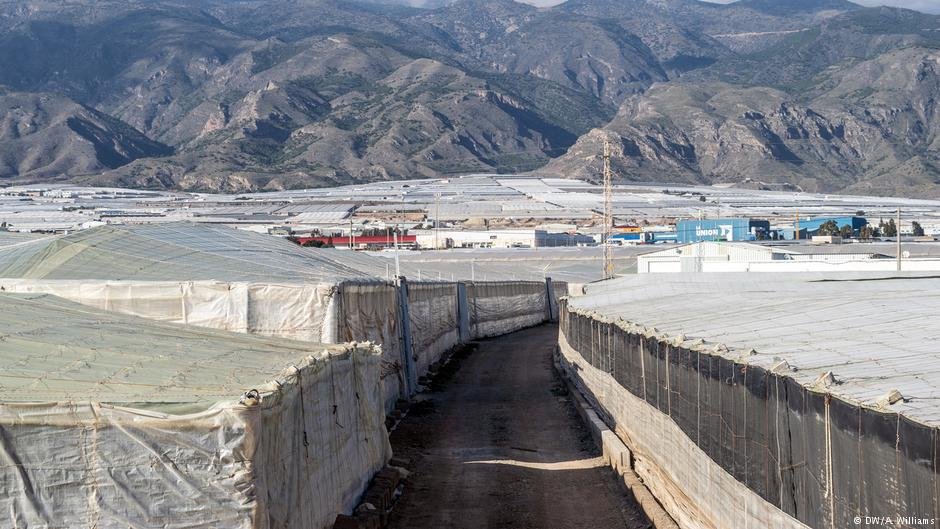 The crops grown in this giant "sea of plastic" — as the area is often referred to — are produced by a mix of small individual farmers and larger multinationals whose fruits and vegetables fill the produce sections of Europe's supermarkets in countries like Germany and the United Kingdom.

The region is also a gateway to Europe for many African migrants. According to local authorities, last year more than 400 boats with a total of around 12,000 migrants arrived in Almeria, supplying further labor for the region's 100,000-plus workforce.

Read more: Refugees in Italy get their hands dirty with own farm

According to Jose Garcia Cueva, an activist and union worker in the Andalusian Workers' Union (SOC-SAT), migrant workers are often exploited and lack the resources to demand better working conditions.

"The problem is that in the fields Spanish law is not respected," he says. "It is very difficult to change mentalities because employers are used to breaking the law. Workers often work without contracts or social security and are generally paid between €32 and €40 ($36-$45) a day instead of the €55 minimum wage. Many are exposed to pesticides in greenhouses." 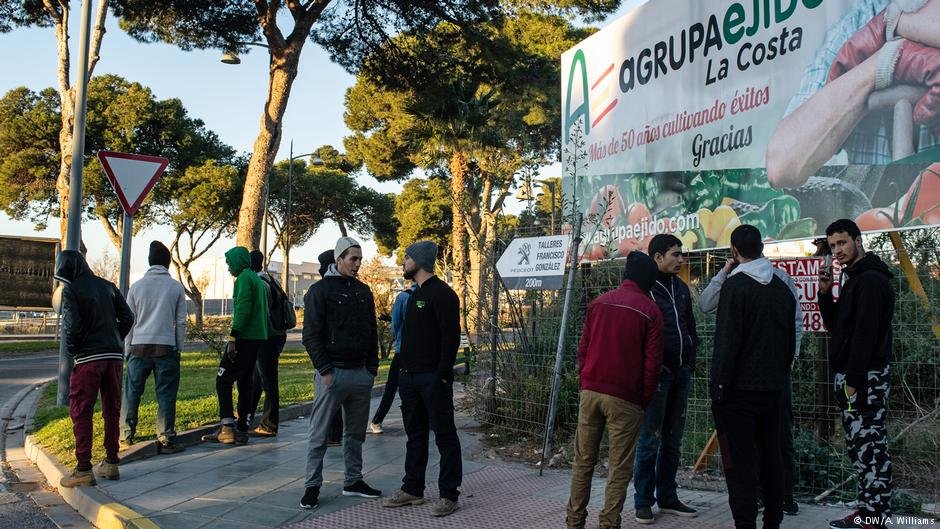 "Two weeks ago, a Moroccan worker died of respiratory arrest. Before dying he had many symptoms, like vomiting," Garcia Cueva says. "An investigation has been opened to see if his death was caused by an exposure to pesticides. He was young and had no health problems."

From greenhouses to slums

Standing by the door of his makeshift home, 28-year-old Ismail Ayaman from Morocco looks at the ruins of his former neighbors' houses. He lives in one of Almeria's many "chabolas" — slums — in the city of Nijar. In February, a fire from a gas canister used for cooking destroyed part of the slum, leaving more than 120 workers homeless.

Like the hundreds of other migrants living there, he built his house from wood and old scraps of plastic used in the nearby greenhouses. Most houses don't have running water and are unsafely powered by loose gas canisters and electricity stolen from power lines. 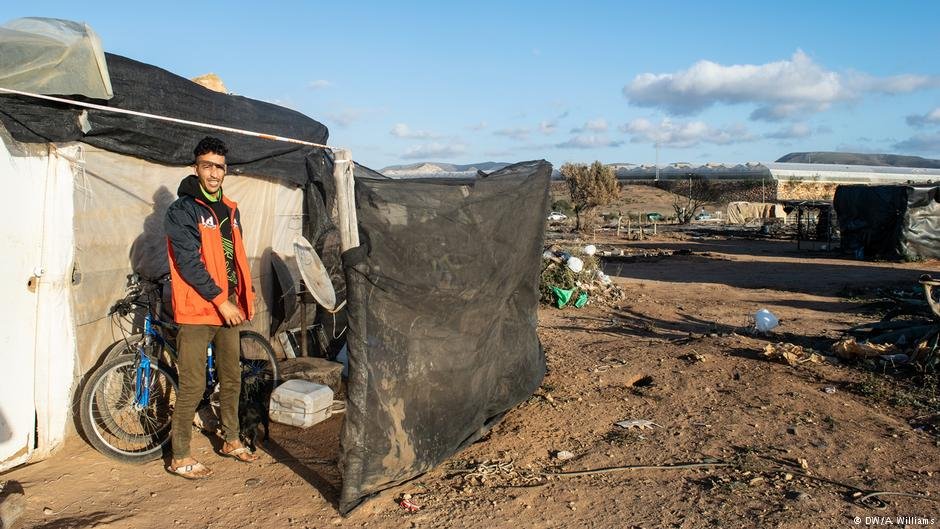 Located just a few hundred meters from the greenhouses where migrants work, the "chabolas" are also a constant reminder of the migrants' shattered dreams.

"We are suffering for nothing," says Driss El Mansouri, who comes from Morocco. "The bosses are always looking for more money and they choose the weak with little voice to pay them less."

"I came here because I thought that I could get a better life in Spain, but in reality life here is worthless," recounts his neighbor, Salah Akili. "I live here alone, without my wife and children. I remained undocumented for 10 years because my boss didn't want to give me a work contract. During all this time, I couldn't go back to see my family in Morocco."

Cracking down on illegal practices

According to local authorities, 30 percent of Almeria's migrant workers are undocumented.

Daniel Perez Reche is the head of the Unidad Central de Redes de Inmigracion Ilegal y Falsedades Documentales (UCRIF), a special police unit dedicated to cracking down on farmers who hire workers illegally. He and his colleagues patrol the region's greenhouses looking for illegal workers and their employers.

"Tell me the truth, okay? This is not you," says Jose Luiz Cerdan, a member of UCRIF, to a man suspected of working illegally in a tomato field as he inspects the man's laminated paper ID. 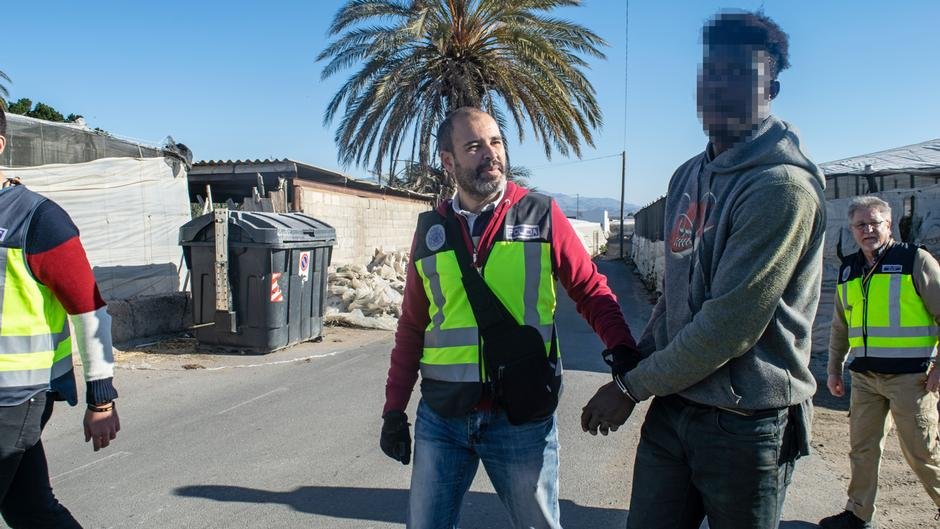 "He has been detained for working with the identity of another person," Perez Reche explains as his colleague walks the handcuffed worker to a van. "This is a very common case in the region: Migrants who already possess the relevant documentation and work permits usually lend or rent their documentation to others so that they can work. This constitutes a crime in Spain, so he will have to go before a judge."

Farmers can be fined up to €6,000 for each worker they employ illegally, the UCRIF officials say.

They say that the competition from produce coming from foreign markets such as Turkey and Morocco coupled with increasing utility costs are putting a strain on Spanish farmers and forcing them to look for alternative ways to save money.

"Last year we made a profit of €25,000 [$28,200]. And this year will be even worse," says Martinez Walbrecht. She asserts that her workers are paid a fair wage, showing an employee's pay statement. 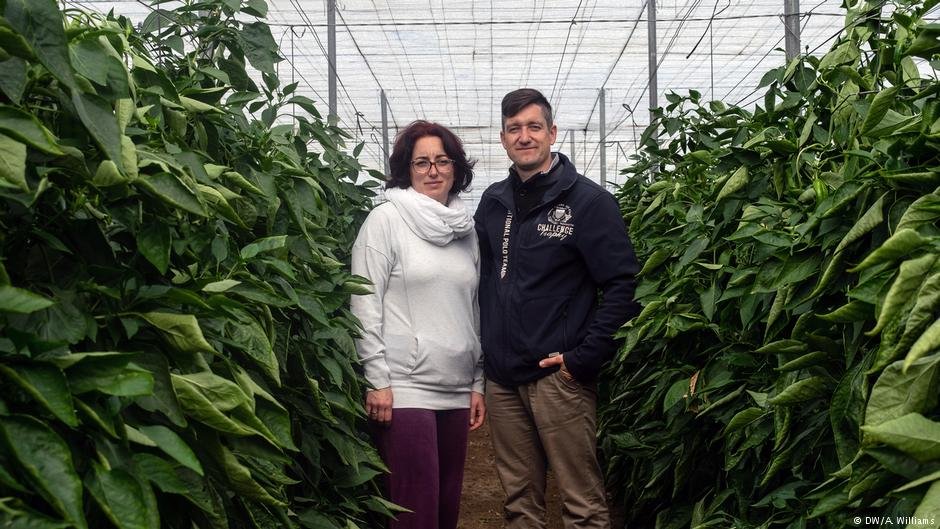 "Last December, the price of cucumber went as low as €0.08 per kilo. To break even, we need to sell a kilo for €0.65. It's very hard. Many farmers are forced to abandon their fields," she adds.

Her husband, a former aircraft maintenance mechanic crew chief for the German Air Force, believes that the strenuous financial situation in which farmers find themselves is pushing them to break the law.

This mega-farm in southern Spain is a key supplier of Europe's supermarkets.

Its workers allege that the conditions there amount to modern day slavery. pic.twitter.com/TjQ0iCoWjH