Another migrant camp in Calais is dismantled

On Tuesday French security forces dismantled the largest informal migrant camp in Calais in northern France. The destruction of the Verrotiéres camp had been announced and planned several days ahead of time. It had been constructed on private land and a fence has now been erected to prevent migrants from returning.

The Verrotiéres camp (which was also known as the Chemin du Pont-Trouille camp) was the largest informal camp to have sprung up in Calais recently. It has now been definitively dismantled. According to organizations which were present during the operation, the removal of the camp proceeded calmly. The operation had already been announced several days before and so did not come as a surprise. The dismantlement of the camp came after the High Court in Boulogne-sur-mer agreed to it on February 19. The court case was brought by the Enedis company (a French electricity company) which owns most of the land on which the camp had been constructed.

“Everything happened very calmly,” said Diego, a member of the organization “Auberge des Migrants” which has been helping migrants in Calais for the last 10 years. “There were not many journalists there, very few witnesses this morning. The local police and the border police took charge of the operation.” According to Diego, there were very few migrants actually there to evacuate “perhaps around 50” out of the 200, mostly Sudanese, who had been living at the camp. “Everyone knew that there would be an expulsion. Some of them already left a few days ahead, hoping to find new shelters. Others just went to hide, or moved to other smaller camps around Calais,” he added.

The migrants who were still at the Verrotiéres camp were taken by bus to various welcome centers (CAES) which offer a roof to people while they go through the asylum process. Signs were put up around the camp before the closure informing migrants that “they would be directed to welcome centers and structures, provided by the state, which are adapted to their needs.” The signs also listed other associations and cooperatives which would step in to help them. 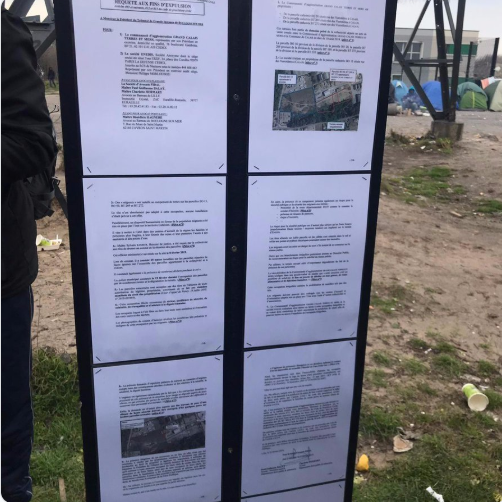 Charlotte, a member of Utopia 56, a humanitarian organization which helps migrants and refugees on a voluntary basis, explained that there was something different about the dismantlement of the Verrotiéres camp compared to that of other camps in Calais. “It was a real evacuation,” explained Charlotte. “The inhabitants cannot return.” That’s because a large fence has been erected around the campground which is largely privately owned, even though a part of it belongs to the Grand Calais district council.

The state and the companies involved in bringing the court case argued that the camp posed a security risk for the migrants themselves. “This illegal occupation posed a number of problems for security, health and sanitation and human dignity,” read some of the billboards posted at the entrance to the camp. 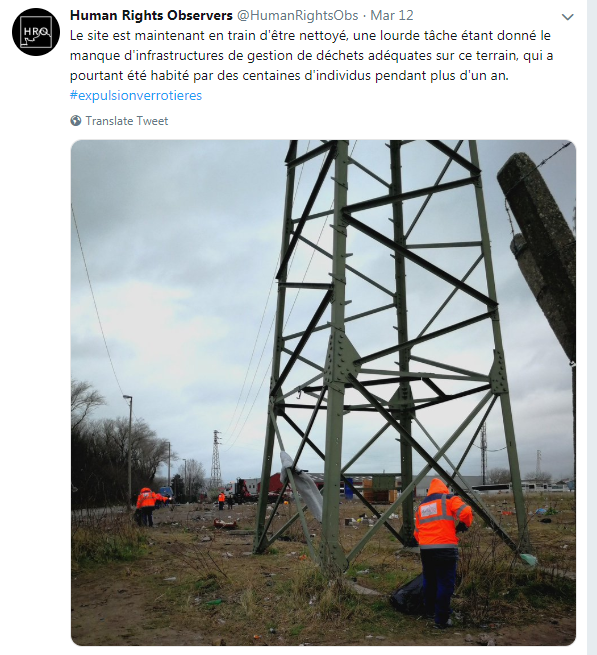 A press release from the local authorities in the Pas-de-Calais region states that the camp also posed a risk to the town’s economy. “The proximity of [this camp to] several local businesses was posing more and more of a problem to economic activities of companies in the area.”

In a series of tweets, Human Rights Observers said that they were being kept on the edges of the operation while the police cleared the land. Photos showed how the border police and the local police were clearing the area and making sure that the empty land was guarded until a fence could be erected.