The Hollywood actress Katie Holmes and her daughter were on the Greek island of Lesbos last week working with refugees in the Moria refugee camp. Both Katie Holmes and the organization she was working with, (New York based) Artolution, posted photos on Instagram about the experience.

In January this year, the British based charity Oxfam branded conditions in Moria refugee camp on the island of Lesbos “inhumane.” Oxfam was reported saying in the Guardian newspaper that women in the camp had taken to wearing diapers at night “for fear of leaving their tents to go to the toilet.” Another charity, Médecins Sans Frontiers (Doctors without borders, MSF) called it “the worst refugee camp on earth” in August 2018.

In a BBC film from the island, the MSF coordinator at the time, Luca Fontana, said that he had worked all over the world, including in Congo and the Central African Republic and during the height of the Ebola crisis. Despite his experiences he “had never seen the level of suffering we are witnessing [in Moria] every day.” That, he said, was because the hope that people might have in other contexts had been taken away from the thousands of people stuck on the island of Lesvos, unable to move forward and unable to move back. 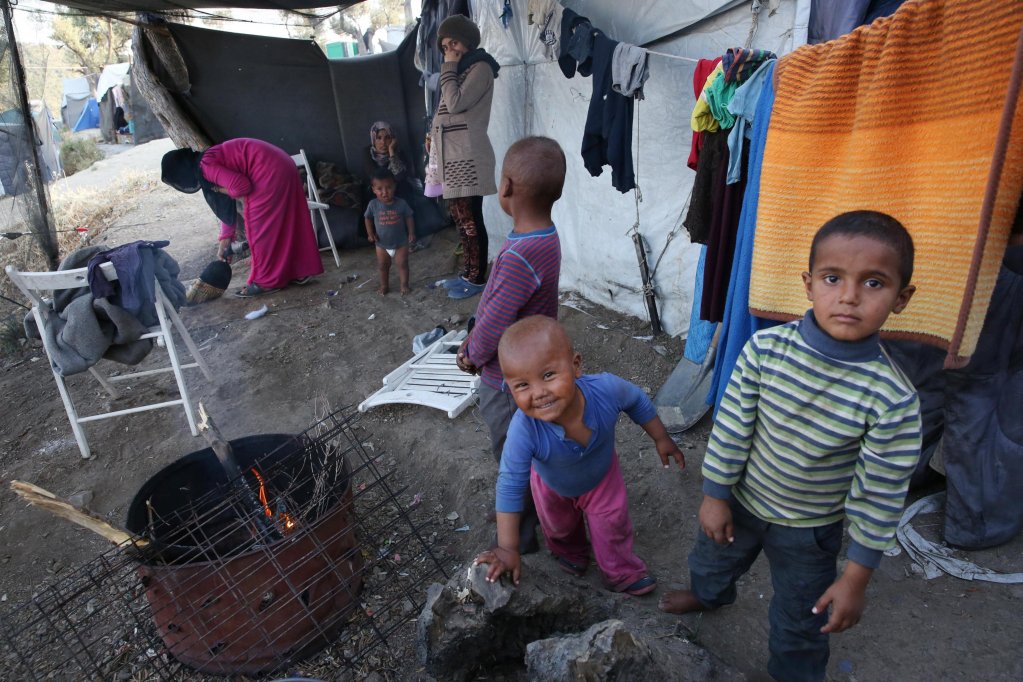 Holmes ‘grateful’ for the experience

Despite the frequent reports of overcrowding, ill-health, and violence in Moria, the Hollywood actress, Katie Holmes and her daughter appeared to have had a fulfilling week working with women and children in the camp. Holmes is Global Ambassador for Artolution, which according to the charity’s website is “a community-based public art organization that seeks to ignite positive social change through collaborative art making.”

According to Artolution’s Instagram feed, Holmes was teaching performance to refugees in the Moria Refugee camp. Holmes herself posted a total of eight photos on her own Instagram page @katieholmes212 detailing some of her activities. Her daughter Suri Cruise is seen giving a high five to a young child, both of them laughing under the hashtag #moriarefugeecamp. In another shot, Holmes sits surrounded by children with one little girl on her lap. A further picture shows Holmes crouched on the floor, appearing to be painting and more show women and children adding to a mural on the wall. Under one picture, Holmes writes: “I am so grateful for this experience of working with and getting to know these incredible women in #moriarefugeecamp their hearts are so kind.”

'I pray for refugees everywhere'

Reports in some sections of the media speculate that Holmes might be thinking of making a film of her experiences, but this speculation remains unconfirmed. On Artolution’s own website, they say they are trying to address the Global Refugee Crisis by sending in “teaching artists….to allow young people to creatively explore their experiences while connecting with positive adult role models in their community.” This, they say, is “an important step in the healing process,” for the refugees they work with.

In another post, Holmes professes to “love these women who became our friends as we collaborated on many different projects this week. […] The resilience of these women is so profound and truly inspiring to witness. I pray for refugees everywhere.”

I love these women who became our friends as we collaborated on many different projects this week. I am so very grateful for this experience. The resilience of these women is so profound and truly inspiring to witness. and I pray for refugees everywhere. #moriarefugeecamp

In December 2018, the Greek Migration Minister Dimitris Vitsas said that his government was working hard to improve conditions in the camp. In a report by Greek newspaper Ekathimerini, the minister conceded that conditions were "difficult" but claimed that all children in the camp had now been vaccinated, have access to education and music classes. A new government scheme has been working to transfer as many people as possible from the islands to the mainland in order to avoid overcrowding and process people's applications more quickly.