Naval ships will no longer be part of the European Union's anti-smuggling Operation Sophia from next month, EU sources said. Italy had threatened to halt the mission unless rescued migrants were taken to other countries.

The European Union's mission "Sophia" to curtail migrant smugglers in the Mediterranean will no longer deploy naval ships in a decision aimed at resolving a dispute with Italy over where rescued asylum seekers disembark.

Negotiations in Brussels on Tuesday resulted in the operation being granted another six month mission without the two remaining navy ships in service but with strengthened air surveillance in return, according to news agencies citing unnamed EU sources.

The training of the Libyan coastguard will continue under the scaled-down program.

Unless EU member states disagree with the suspension by Wednesday, the revised mission will continue from April 1. 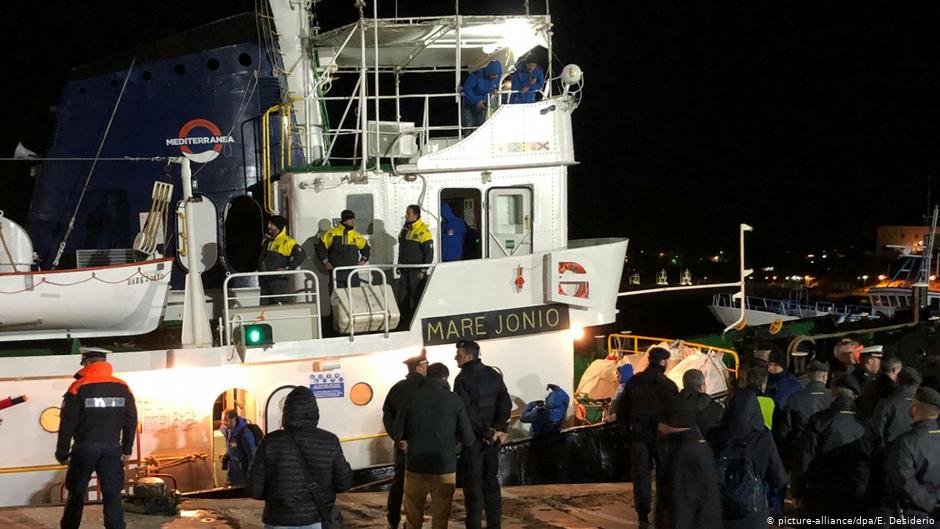 Who will take in rescued migrants?

Operation Sophia was given an interim extension of three months in December last year after EU member states could not agree on a longer commitment.

Rome had been arguing hard against the policy of automatically bringing all people rescued at sea to Italian ports with threats of blocking the mission if the rules of engagement weren't changed. It challenged other states to take in more arrivals

At the same time, other member states have been refusing to take in migrants that don't first arrive on EU territory at their borders.

Since the operation began in 2015, "Sophia" has been credited with saving more than 45,000 people's lives at sea.

While its primary mission was to combat smuggling gangs off Libya, it was also tasked with enforcing a weapons embargo on Libya, which has seen ongoing conflict since the fall of Muammar Gaddafi in 2011.

It was unclear whether that aspect and the mission's monitoring of illegal oil exports from the country will continue under the new terms.

Only two ships were deployed over the last three months after Germany pulled out its frigate Augsburg in January.

German Defense Minister Ursula von der Leyen had accused the mission's Italian commanders of stationing the ship "in the most far-flung corners of the Mediterranean" far away from refugee routes.

Read more: How the EU's resettlement plan is failing to meet its goal