'We Africans will do anything to avoid Libya'

The only Catholic church on the Greek island of Lesbos has become a haven for many African migrants who have crossed the Aegean Sea from Turkey. Traveling through Turkey is an increasingly popular route for African migrants heading to Europe who are desperate to avoid torture and slavery on their journey through Libya.

After filing out of the Church of the Assumption of the Virgin Mary, Lesbos’ only Catholic church, African migrants wait for the bus to take them back to the tents and containers of Moria Camp and the overspill settlement known as the Olive Grove.

Today, prayers have been dedicated to Jean-Paul, a migrant from Cameroon who died in Moria.

The reason for his death is disputed. The camp’s director says Jean-Paul was in poor health and had a history of medical problems. The 24-year-old’s friends say that he suffered in the squalid living conditions of the camp and that he eventually died from the cold.

Jean-Paul’s family saved up every last penny they had to send him to Europe after he was targeted by threats of violence. He came from an English-speaking region of Cameroon, where attacks on civilians and security forces have escalated dramatically in the past 18 months amid separatist claims for independence.

"We just can’t believe it," Jean-Paul's brother told InfoMigrants over the phone. "For us, it’s not real right now."

Jean-Paul never planned to stay in Europe. He had hoped the unrest back home would eventually subside so that he could return to his wife and baby son. 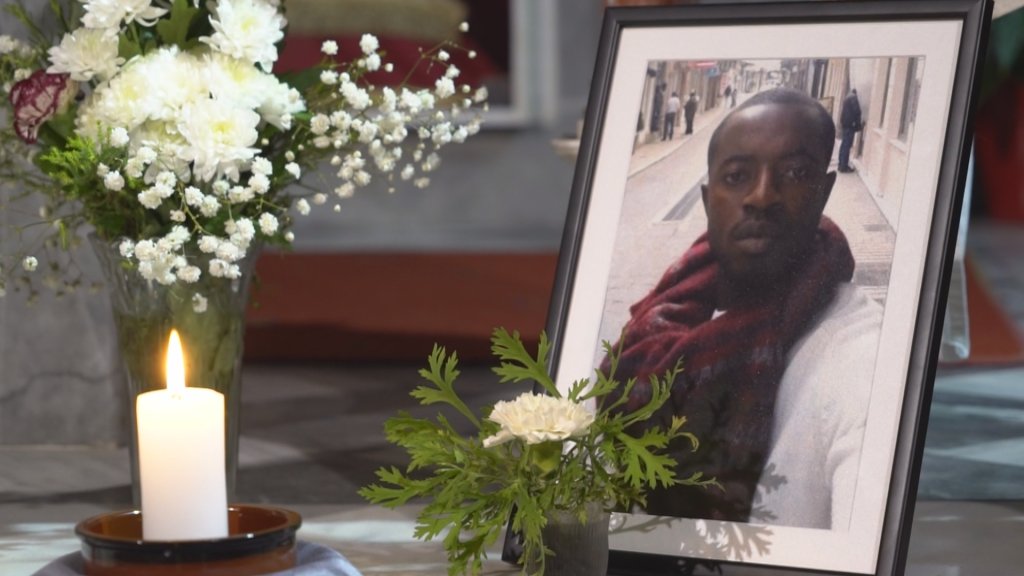 ‘I found hell in Europe’

Christian (not his real name) is also from Cameroon. In June 2018 he arrived in Iran on a student visa. "Many Africans save up a lot of money and as soon as they get their visa and come to Iran, they head to Turkey," he says.

The favoured migratory route for Africans used to involve crossing the Sahara and catching a boat from the Libyan coast towards Italy.

The Turkey-Greece route is longer and more expensive, but Christian says that it has gained popularity since CNN released images showing black African migrants being sold at a slave auction in Libya. "It took me a long time to reach Lesbos. Throughout my journey I kept telling myself, avoid the hell you’ll find in Libya. But I found hell here in Europe."

For Christian, "hell" means his first three months in Lesbos, which he spent in a high-security section of the Moria Camp where some arrivals wait 90 days for their identities to be registered.

They call it "the prison" or even "Guantanamo". Christian describes long, hot summer days without enough drinking water, and during which he was allowed out for just two walks a week.

Migrants from countries considered to be in conflict, such as Syria, Afghanistan and Iraq, tend to bypass the high-security compound and are given accommodation in the main section of the camp.

We meet Jean (not this real name) in a makeshift canteen next to the camp. As a 17-year-old, he benefits from special protections guaranteed by European law and so he has not spent any time in "Guantanamo". Instead, he lives in a section reserved for unaccompanied minors.

When Jean was living in the Democratic Republic of Congo, he managed to get a Turkish student visa. His family saved up for his plane ticket and the €500 needed to pay the smuggler who arranged for him to cross the Aegean Sea from Turkey to Lesbos.

Jean says that his health and morale have both suffered. "I often have dark thoughts. It’s difficult to talk about it. We don’t discuss it amongst ourselves. But a lot of young people have tried to commit suicide. They can’t bear life here."

African migrants have to wait a particularly long time, usually at least a year, for their asylum requests to be processed. During this time they are not allowed to work.

Young, single men like Christian and Jean are not prioritized. The Greek authorities, faced with high numbers of requests, first deal with families and those who have fled warzones in countries such as Syria, Iraq and Afghanistan.

As the long wait continues, the congregation at the island’s small Catholic church has grown significantly. After Nigerian asylum seekers first started attending mass there in June 2016, the congregation reached a peak of 120 in late 2018. Few of these church-goers speak Greek, but a French-speaking priest has arrived and a British sub-deacon translates into English, offering a weekly dose of much-needed comfort and peace.