Life in a migrant squat on the edge of Nantes

In Saint-Herblain, on the outskirts of the western French city of Nantes, an abandoned sports hall has become a squat for hundreds of migrants. The living conditions in the squat are dire, and the occupants say they have been left to fend for themselves. “Where’s the government?,” a 27-year-old Guinean wonders.

It’s 11 o’clock on this Tuesday morning, and the occupants of the Saint-Herblain sports hall squat, located on the outskirts of Nantes, are slowly waking up. The atmosphere is calm: some are brushing their teeth, others are having their breakfast while some have chosen to stay in their tents for a little bit longer. Outside, about a dozen migrants are chatting with each other in the morning sun.

Mamadou has a towel around his neck and is having a coffee and a piece of bread. “More journalists? Journalists come here all the time to talk about our situation, but where is the government? No one is doing anything for us!”, the 27-year-old Guinean, who is still awaiting his CNDA (asylum decision from the national court of asylum), exclaims. “I’ve been here since November 11 and nothing has changed, it’s even gotten worse!” 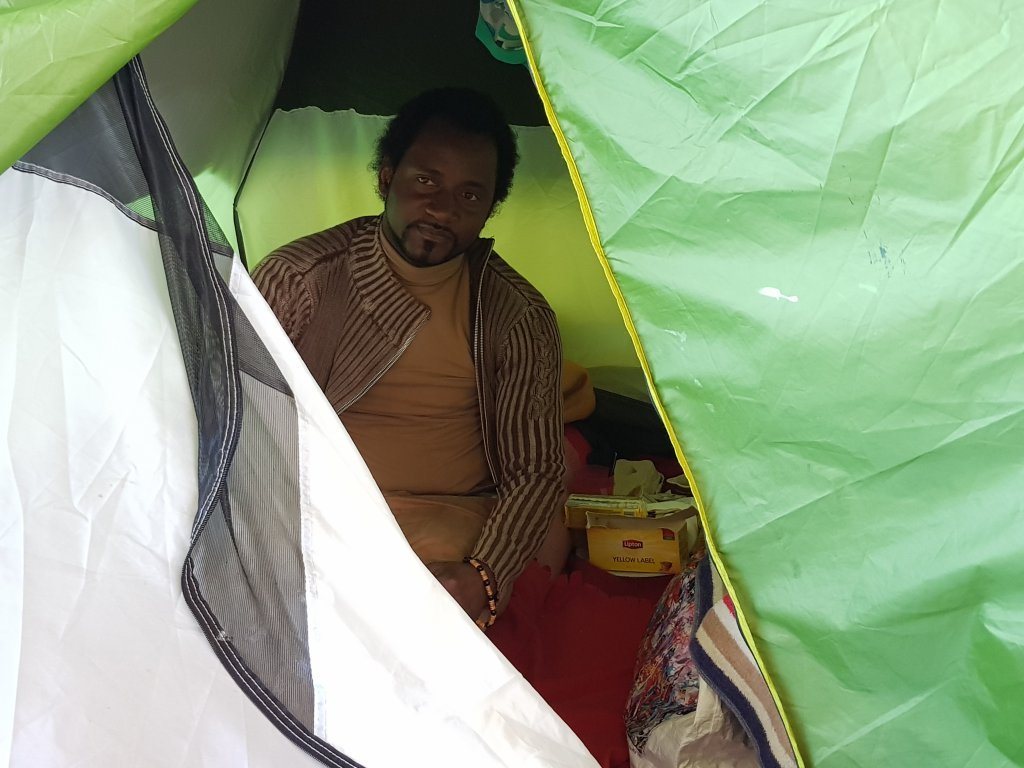 ‘Another two months in these conditions!’

After authorities cleared the migrant make-shift camp in the city’s Vertais square on October 26, around 60 of the evacuated migrants were helped by local NGOs to find refuge in the former Jeanne Bernard sports Hall in Saint-Herblain, a few kilometres from the city center. The premises belong to the Diocese of Nantes, but were abandoned a long time ago. “In the beginning there were about 60 migrants but no other housing solutions were made available and bit by bit other migrants living on the streets joined the squat too,” Juna, who belongs to the local aid group L’autre Cantine (which distributes around 250 meals per night in the sports hall), recounts.

Today, the sports hall houses between 250-300 people –including single women – who mainly come from Guinea, Sudan and Eritrea. Every time there’s an expulsion rumor in other parts of France, the squat’s resident number swells with the arrival of new migrants from Paris and Calais who are in search of refuge. 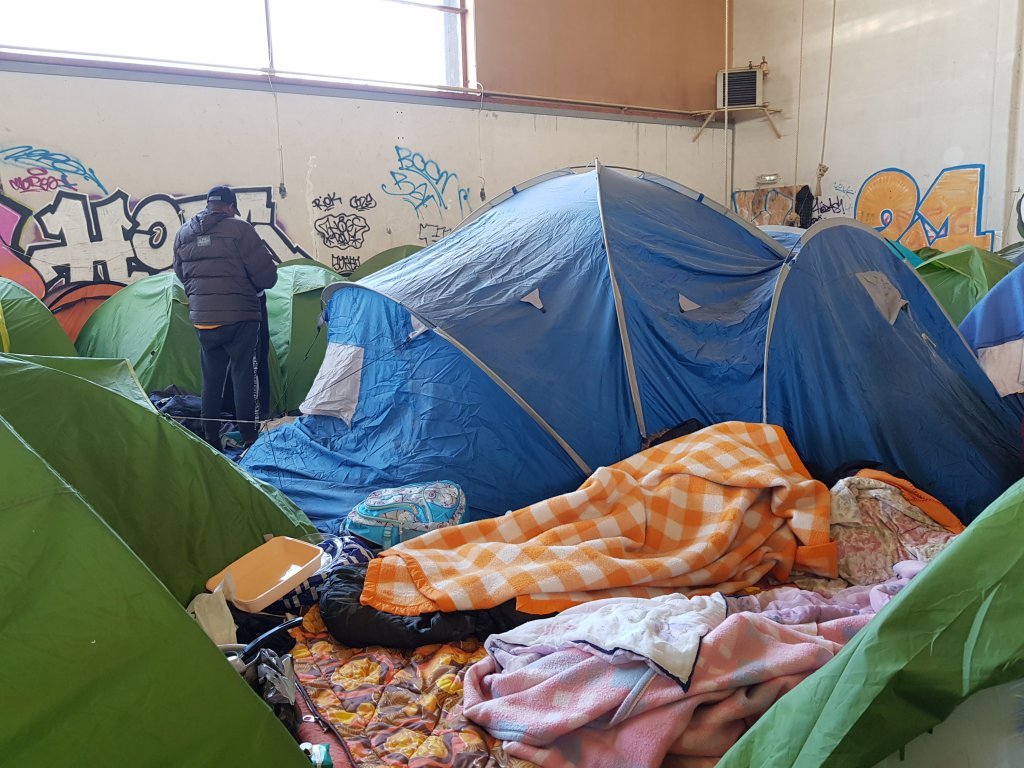 At the end of March, a court ordered the squat to be evacuated within two months in order to give the migrants enough time to find other housing solutions.

Sitting next to Mamadou, Manman shows an official document. “The evacuation of the sports hall will take place on June 9, in exactly two months’ time,” the Nigerien explains. “Another two months in these conditions!”, says Mamadou, who, just like his fellow squatters, hope that the government or the city of Nantes will intervene to find a more viable solution for them.

Mamadou, and many of the other squat occupants, is waiting to be regularized. The process is long and includes a meeting with police, an interview with OFPRA, and potentially an appeals hearing before the National Court for the Right of Asylum (CNDS). Many of them fall under the so-called Dublin regulation. None of them have been offered any housing solutions while waiting for their cases to be processed. All of them say they feel abandoned, left to fend for themselves.

Sitting by his tent in the back of the sports hall, Ahmed is trying to decipher an official document. The young Chadian solicits the help of a French activist who happens to be around. “I need your help, I have to send a request for the reexamination of my asylum application within five days, but I don’t speak good French,” the young man explains in Arabic. “I have to fill this whole form out,” he says, showing him the OFPRA-stamped documents. His tent neighbors try to help him, for better or for worse. 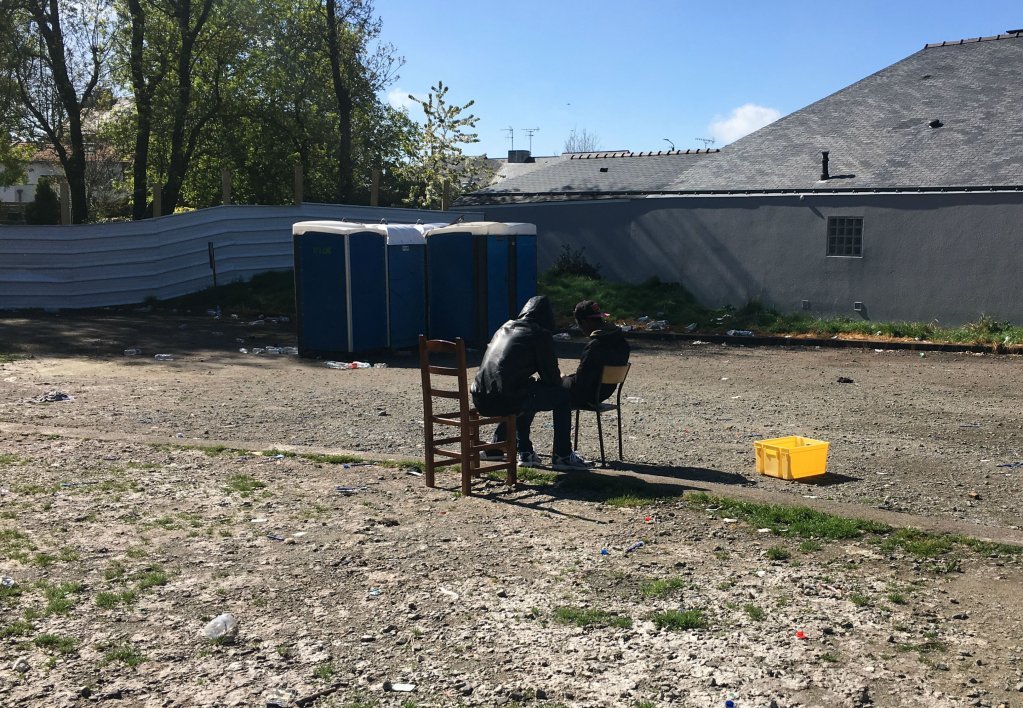 Further away, a group of Eritreans are also having problems understanding documents from authorities. “We’re trying to help Negeset [a 32-year-old woman who has come to Nantes on her own, eds note] to understand what is written,” Asmerom says in hesitant French. “I’m the only one who understands some French,” the young man says. Asmerom is due to meet with police in September. “What do I do while waiting?,” he says of the long waiting time.

To fill the void of any official help, the squat’s occupants make do the best they can.

To keep clean, the migrants use the few showers that have been left in the sports hall. “But the water is ice-cold,” Mamadou says after leaving the shower to go to his tent to get dressed. The showers are unhygienic and dirty. In the courtyard, local authorities have installed three toilets, “not enough considering the number of people inside,” Juna, from L’autre Cantine, says. 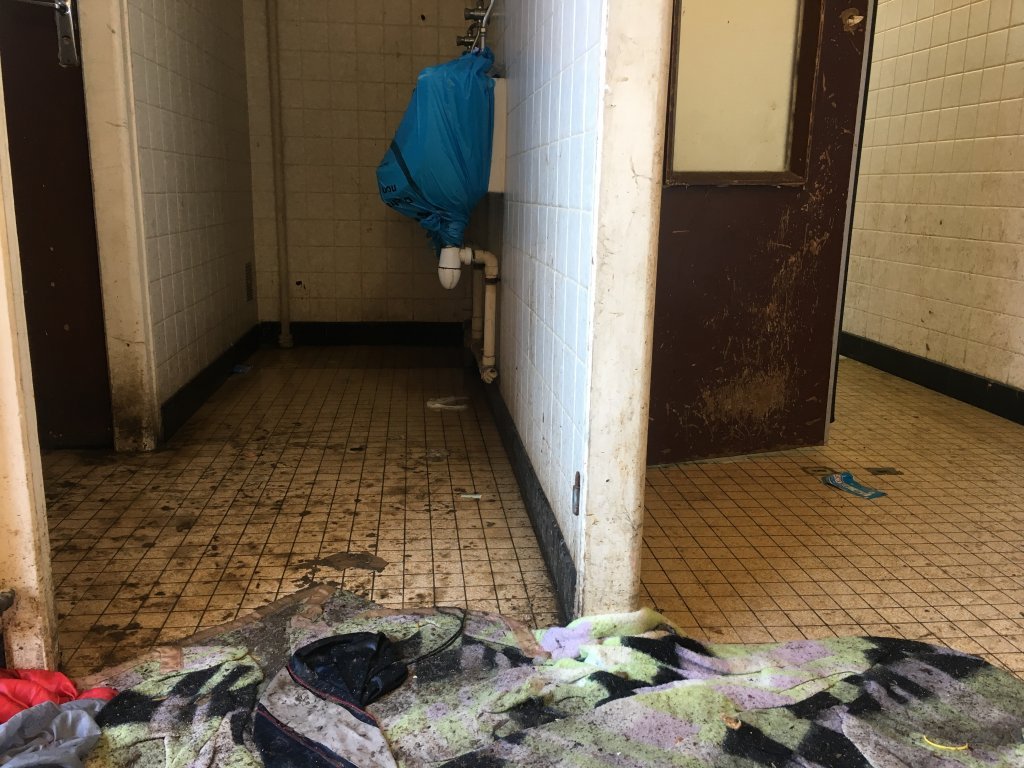 ‘At night, you can get stabbed’

During the day, the migrants try to keep themselves busy. “The Eritreans and the Sudanese put a lot of effort into the French classes” which are held by an NGO, Juna explains. The others watch videos on their phones, chat with each other, listen to music, or play football.

Aboubacar takes care of others. On this particular afternoon, the 29-year-old Guinean has set up a makeshift barber shop. “I was a hairdresser in Guinea and so I cut people’s hair for those who need it,” he says as he works his scissors into Ahmed’s hair. 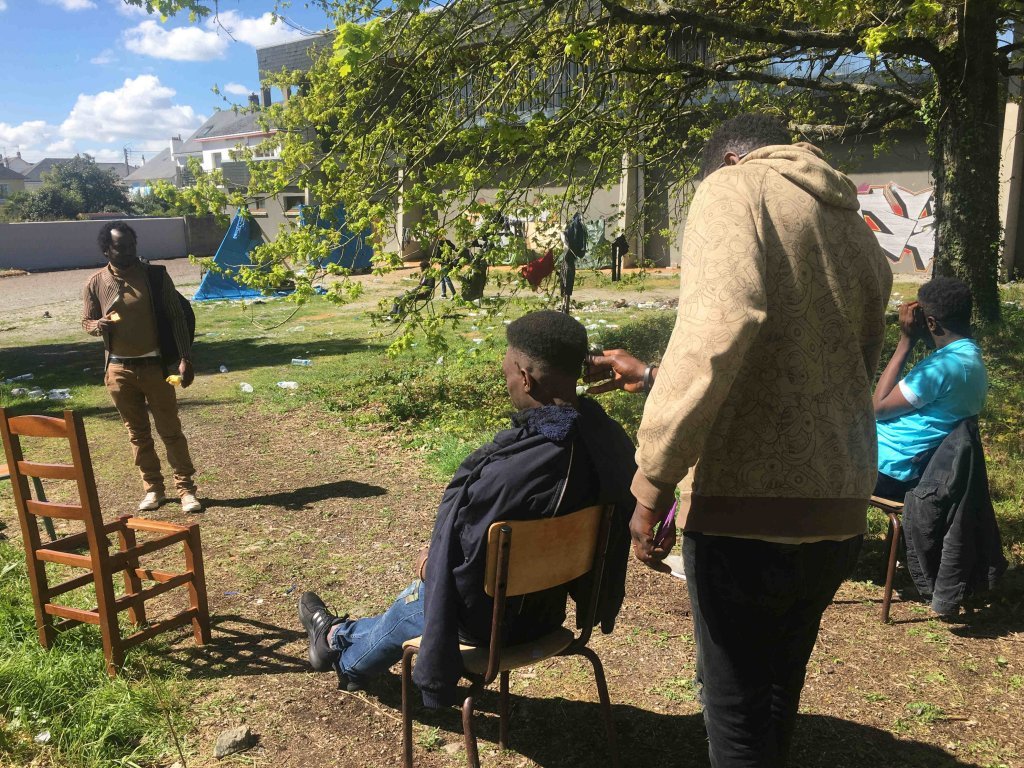 Mamadou is sitting on a chair eating chips while watching his friends getting their haircuts. “At noon we do what we can for food,” he explains. “L’autre Cantine only distributes meals at night so we have to make do with what we have.”

Everyone complains about the living conditions and the lack of security in the squat, especially at night, when brawls regularly erupt and quickly get out of hand. “If you get too close, you can get stabbed,” Alpha, another Guinean explains. “It happens so fast, it’s because people are drinking,” Mamadou adds.

“When it starts to get rough, I stay in my tent and don’t move,” Alpha says. “I wait for it to be over, I’m too scared.”

The situation has become so bad that some people have set up their tents outside, in front of the sports hall. “It’s too dangerous inside,” Yonas, an Eritrean in his 50s, says. “We prefer to stay here. It makes life difficult, but at least we get to sleep.”