Libya's migrants under threat as battle for Tripoli sets in

Migrants locked in detention camps in Tripoli face increasing danger as the prospect of a drawn-out siege looms. Inconsistent responses from Europe to the crisis have left them little hope.

At least three thousand migrants remained trapped in official camps in or near conflict zones in Tripoli as General Khalifa Haftar's advance from the south looked increasingly bogged-down on Tuesday.

There are reports of many more migrants in unofficial detention camps, but Doctors Without Borders (MSF) coordinator Craig Kenzie said those locked up in official camps with no control over their own safety, only hundreds of meters away from front lines, were "exceptionally vulnerable."

Kenzie said that the "dangerous and inhumane" conditions MSF was already witnessing inside camps before Haftar's push to take the western capital two weeks ago have only gotten worse.

With three medical workers already killed in the fighting and aid workers' access restricted, diseases such as tuberculosis and scabies, and a dire lack of food and water, have made already precarious conditions in the centers life-threatening. In addition, constantly shifting front lines have left migrants trapped in camps cut off from aid workers, many of whom find themselves now operating in battle zones.

"Already we've got one of the detention centers we work in the Qasr bin Gashir area on the other side of the front line and we haven't been able to to get access to them," Kenzie said.

Reports of detainees being coerced into military duties including facilitating supply lines, an act which may constitute a war crime, could not be confirmed by DW. 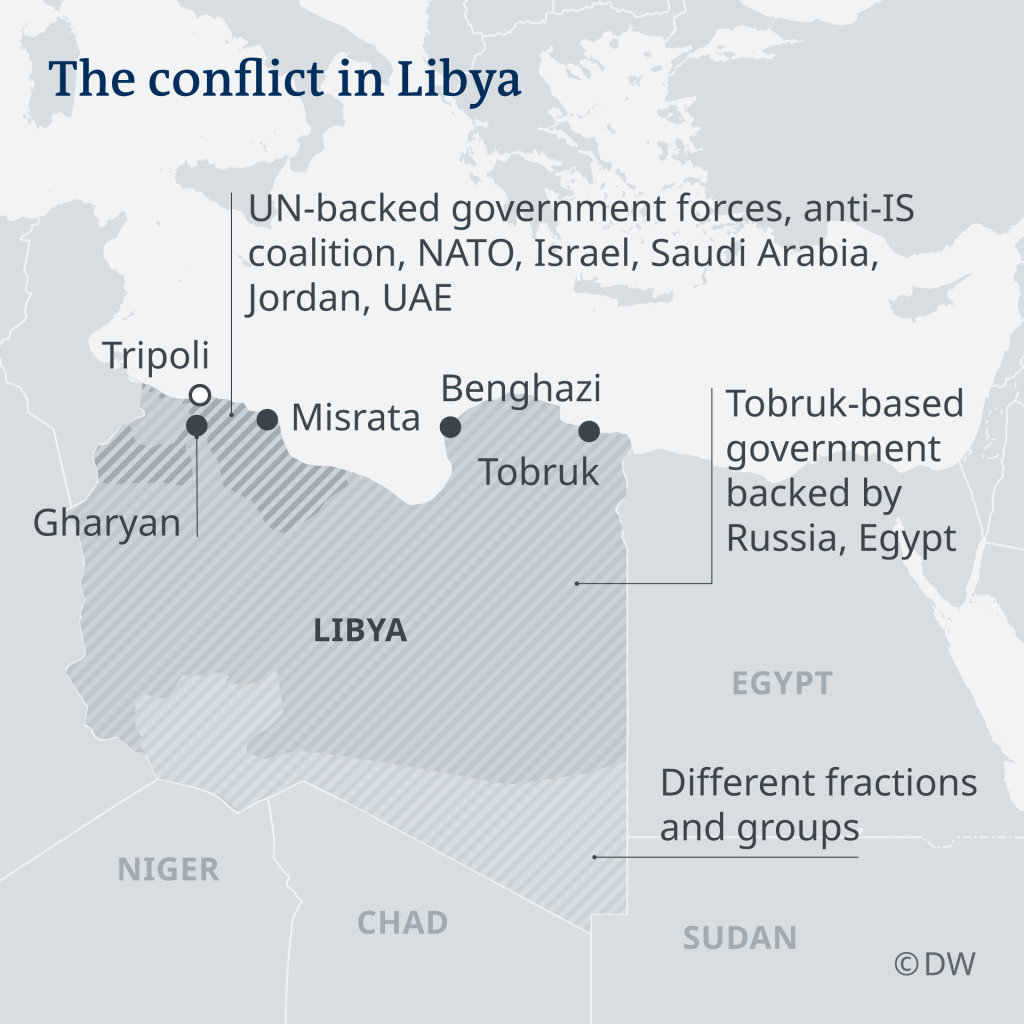 Wedged between the fighting and the sea

Refugees and migrants from across Africa that funnel through Libya and often onwards across the Mediterranean already face "unimaginable horrors," according to a 2018 UN report, with those held in camps subjected to forced labor, degrading strip searches and rape by guards. Starvation, beatings, burning and electrocution were also used by smuggling gangs and militias to extort money from their families, according to testimony from nearly 13,000 interviewees.

With previous conflicts leaving the Mediterranean crossing as one of the only options for reaching Europe, MSF expects many more people will risk the journey as the current fighting continues. The United Nations refugee agency, UNHCR, estimated one in every 18 refugees died trying to cross the Mediterranean last year. But current European policy that criminalizes rescues by nongovernmental organizations and rewards the Libyan coast guard for turning boats back means those trying to escape are forced to return to the same dangers.

"There's no way that we can consider Libya as a port of safety," Kenzie said. "It's just not acceptable that these people are just political pawns for these European states." 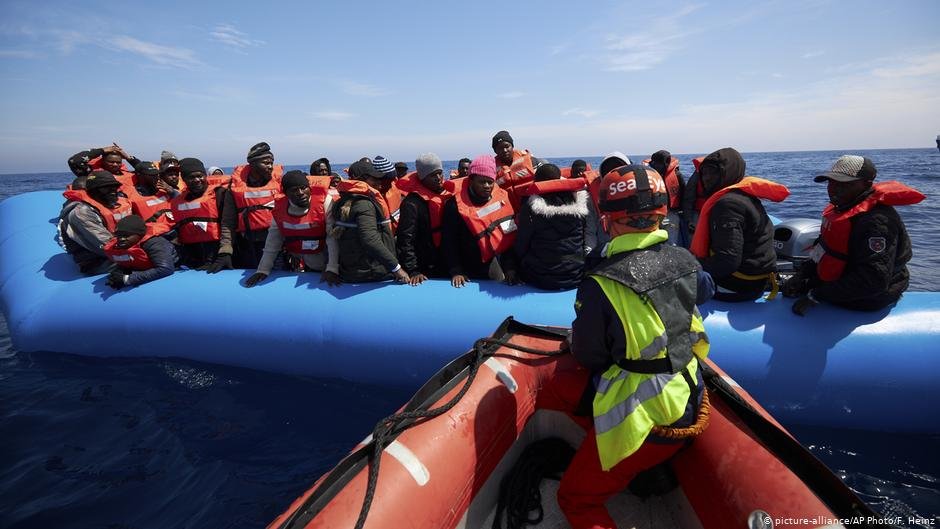 Some militias in the Tripoli conflict have come to see control over migrants as both a source of revenue and legitimacy in the eyes of Libyan authorities and their European partners, turning them into a tool of war, according Jacob Mundy, an associate professor of peace and conflict studies at Colgate University .

"A militia that controls a detainee center can say it's a constructive partner in terms of international migration, so then the migrants obviously become weaponized to a certain extent in who can control them," Mundy told DW from Tunisia.

Mundy said the question of whether militias in control of migrants were economically motivated was key because it would determine how much they might fear Haftar's advance as threatening their trade and could lead to a protracted conflict.

The European Union and its member states instated a raft of policy measures to cut off the Mediterranean migration route as a wave of anti-immigrant populism washed over Europe beginning in 2016. The policies on the whole have been criticized as quick fix that sees funding and power handed to militias who control the flow of migrants.

"In a weird way it's a kind of crisis displacement where you have a crisis of politics in Europe, now it's being pushed upon Libya and it falls upon migrants the most," Mundy said.

With France backing Haftar as a force for stability in a virtually collapsed state and Italy supporting the UN-backed Government of National Accord (GNA) and its militias in Tripoli, European responses to the plight of migrants have been relatively weak. 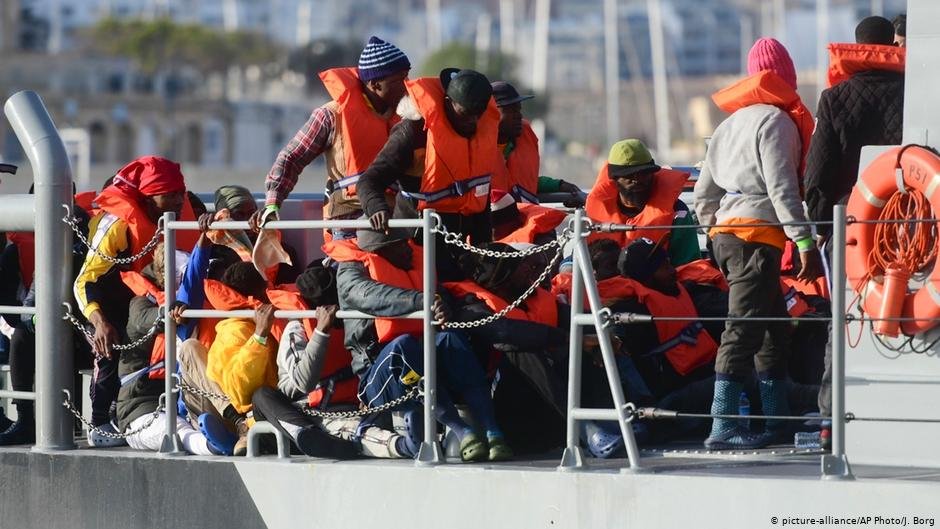 As an indicator of Italian government sentiment, hard-line Interior Minister Matteo Salvini said Monday that he did not know whether to laugh at accusations of false imprisonment for refusing to let migrants disembark from a rescue ship.

In Germany, a group of more than 200 MPs launched an appeal to the Interior Ministry on Friday to address emergency rescues in the Mediterranean, but as of Tuesday there was no response.

UN-backed GNA Prime Minister Fayez Serraj played on European fears Monday, saying an influx of more than 800,000 migrants from his country could reach European shores if the instability in Libya continued.

But as regional players maneuver and the the conflict escalates, migrants are left trapped and powerless.