‘Like living in hell’: Asylum seekers protest at the lack of job opportunities in Cyprus

On Tuesday April 16, between 150 and 170 asylum seekers on Cyprus took to the streets of the capital Nicosia to demand full access to the labor market. A ministerial decision passed in October 2018 states that asylum seekers should be given access to the labor market one month after filing their asylum application. The reality is very different though, says the Catholic charity Caritas.

“If you seek asylum in Cyprus, it is like you are living in hell” explains a Gambian asylum seeker who did not want us to print his real name. We’ll call him John. John contacted InfoMigrants on Facebook to tell us about the protest in Nicosia on Tuesday, which he attended along with about 120 other asylum seekers. “Even when you find a job, when you sort out all your papers, and you take it all along, they often tell you, ‘I’m sorry my friend, we cannot hire you,'” says John sorrowfully.

“We are facing a lot of difficulties here,” he explained. Asylum seekers often struggle to find a valid rental contract and face long waiting times at the authorities. "Sometimes, we will go and they will tell us ‘Come back next week’. When we go back next week, they will tell us again, ‘come back next week…” Each time they go to the social welfare center, which is about 14 kilometers outside Nicosia, John and the others have to pay a bus fare with money they often don’t have. All this takes its toll, complains John. The frustration that many asylum seekers feel at their situation has sometimes spilled over into fights and attacks on security at the welfare center, admits John.

John’s story is backed up by the head of Nicosia Migrant Centre Caritas Cyprus, Gosia Chrysanthou, who says that the system is simply not working as it should. “There are three main obstacles [to finding work] in Cyprus,” explains Chrysanthou. “The first is that [asylum seekers’] documentation is delayed. Even though the law says they can work within one month of applying for asylum, this cannot happen unless they have proper documents.” Chrysanthou says the documents often come three months later. “During this time they cannot register at the labor office either.” She thinks the delays are due to the high number of asylum seekers being processed by the system. 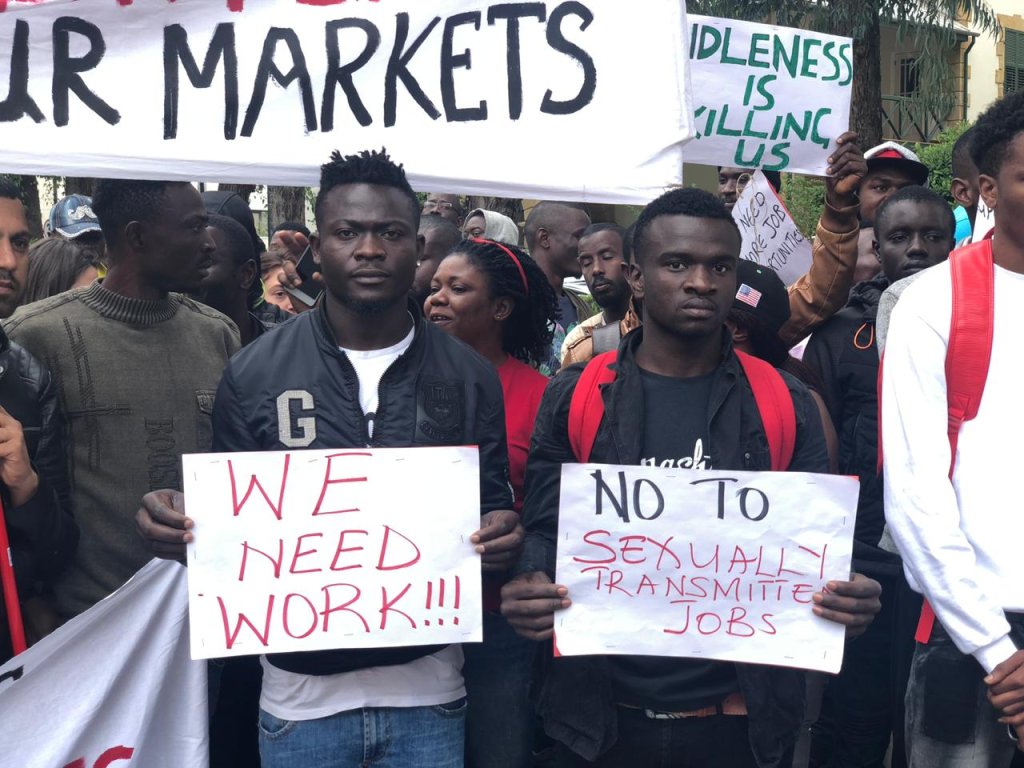 One of the highest densities in the EU

There are about 10,000 asylum-seekers in Cyprus currently, which is one of the highest ratios per capita within the EU after Malta and Luxembourg. The latest figures from the EU Commission are from 2017. Caritas says in the last year, the numbers coming to Cyprus have increased dramatically with migrants arriving both by sea and flying in via the Turkish-administered north. In 2017 migrant density on Cyprus stood at 24,8 per 1000.

The second obstacle is that asylum seekers are only allowed to work in certain jobs. These are low paid jobs that few people want to do, Chrysanthou explains, and there are few jobs available in the defined categories, so the chances are very low for people to get these jobs. Although the sectors are due to be revised, asylum seekers currently can only apply for jobs in agriculture, fishing, manufacturing, waste management, wholesale trade repairs, building, and outdoor cleaning (car washes), food delivery, and leafletting.

The last problem is the amount of paperwork required from employers who plan to employ an asylum seeker. These papers “take about four months to be processed,” explains Chrysanthou. Everyone seems stuck in a kind of bureaucratic Catch-22. Chrysanthou sums it up: “So we have a situation that the asylum-seeker is lucky enough to find a job within the category he is allowed. Then the employer must obtain a permit. The migrant needs to find an employer who is willing to file the papers to obtain the permit and then wait four months. So the employers are saying, why should I go through this when I can employ someone from the EU more easily?”

“We all feel stuck,” says John. “It is like being in a darkened room and not knowing when the government might switch on the light,” he adds. Apart from bureaucratic delays, Chrysanthou explains that many migrants and asylum-seekers also face exploitation by potential employers or agents, even when they do manage to find a job. The protest also called for an end to the exploitative situations many find themselves in. Some asylum seekers are promised jobs by agents who ask for large payments up front, explains Chrysanthou. Again, money most of them don’t have.

Even when asylum seekers receive food coupons from the welfare center, “they are only for a limited number of products at very high prices,” says Chrysanthou.

Ultimately the protesters want to be allowed “to be contributors to the economy of Cyprus and not just consumers,” adds Chrysanthou. “It should be music to a government’s ears,” she says. “People who want to work and support themselves instead of being dependent on government benefits."

‘Not many migrants want to be in Cyprus’

Many migrants arrive in Cyprus unintentionally. “The migrants find themselves here because of the smuggling routes. The smugglers drop them off here and there and say ‘this is Italy go’ or ‘this is Europe go’. They don’t ask which country in Europe, they assume they are on the mainland,” Chrysanthou told the Cyprus Mail at the end of December 2018.

“I would say that about 95 percent of the beneficiaries who come to our office for help have no idea they are in Cyprus." Chrysanthou estimates that at the end of December there were probably about 85, mostly Cameroonian, asylum seekers sleeping rough in the city -- a situation which is new for the Cypriot city. 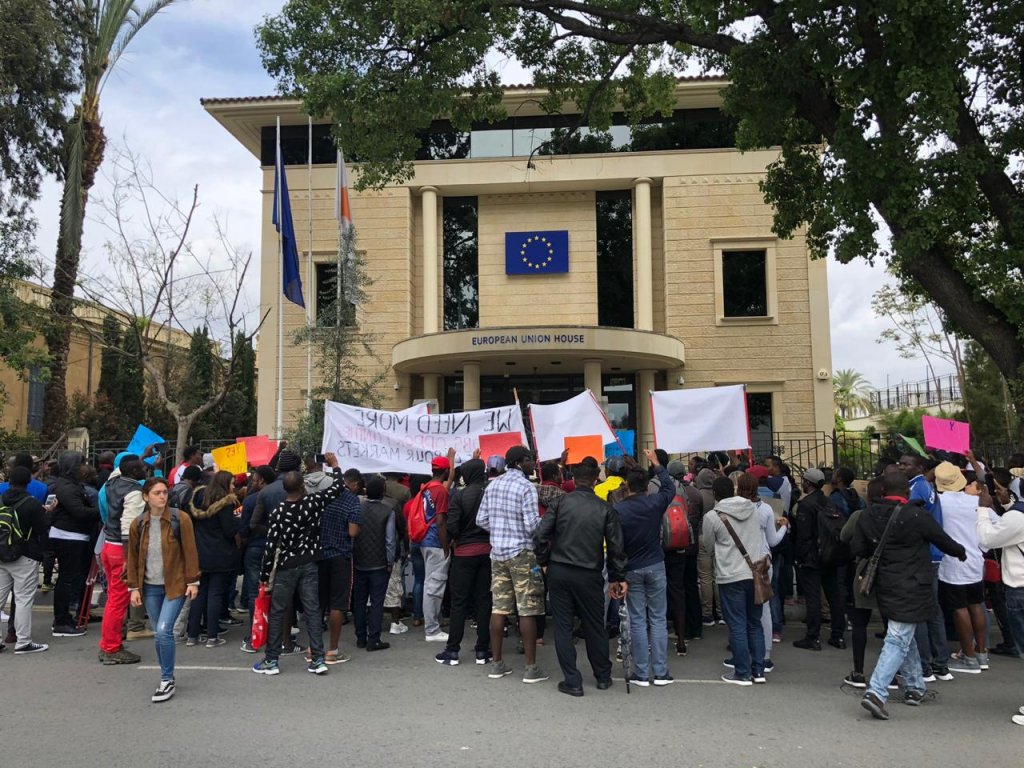 Finding a valid rental contract is often the first hurdle asylum seekers have to overcome. Without an official rental contract, they cannot register at the labor office or receive the benefits to which they are entitled from the EU. Chrysanthou says that most landlords don’t want to rent to asylum seekers. It’s an assertion backed up by two Cameroonian men interviewed for the Cyprus Mail. Chrysanthou thinks the reasons could be two-fold: Either racial discrimination or a lack of trust in the Cypriot authorities which have not, according to Chrysanthou, managed to find an adequate way of managing the money set aside for asylum seekers. Rental payments too from the welfare office often arrive 4-5 months late, something which most landlords are not willing to put up with.

The asylum process itself is slow in Cyprus. John says he knows of people who have waited more than two years and still have not had an interview to determine their status. He has been on the island since August and has not yet had an interview.

Without papers, they cannot leave the island or try their luck elsewhere. Chrysanthou explains that it can often take years for people who arrive in her office to open up about the experiences that forced them to flee. Many sub-Saharan Africans, like John, do not trust the authorities and will say that they are “seeking a better life’ making them appear to be ‘just’ economic migrants. But behind that “summary” is often a much more complicated, and heartbreaking story, says Chrysanthou.

Many of the new arrivals, especially those from Cameroon are fleeing unrest. One unnamed man explained in a video to the Cyprus Mail that he “was just running for safety.”

The rate of successful asylum applications is “low” says Chrysanthou. Many get “subsidiary protection” which adds to their uncertainty as it only affords temporary protection and prevents family reunification and other ‘benefits’ which the asylum-seeker may have been hoping to obtain. 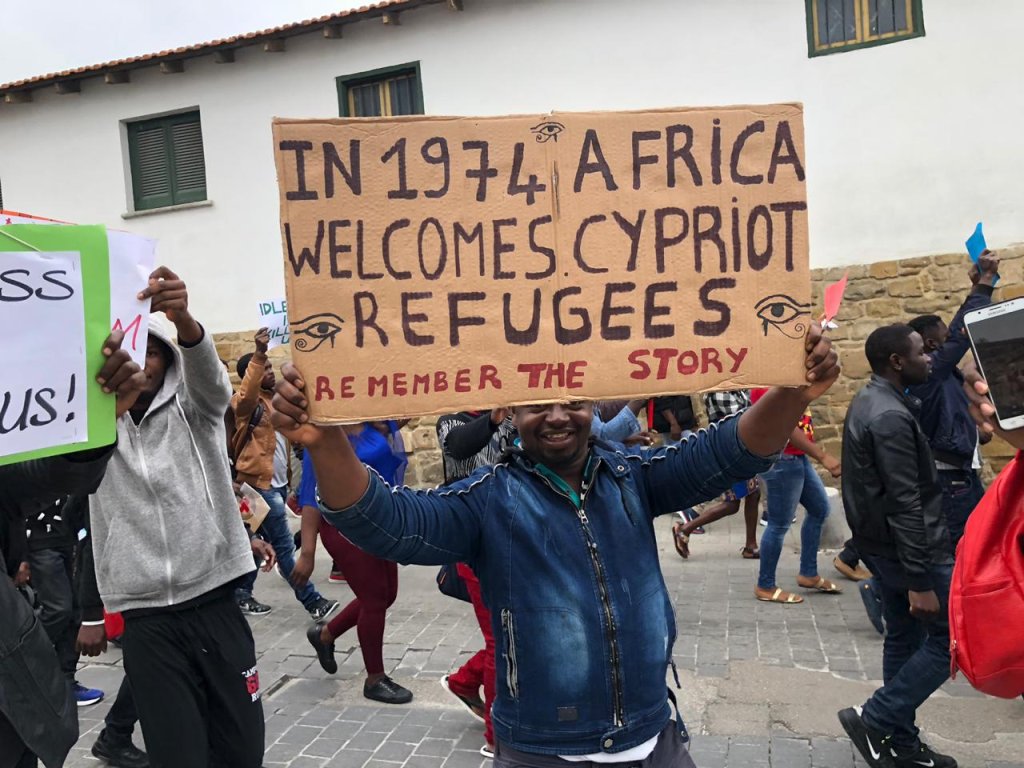 John says he arrived by boat from Libya. He spent the first few days on the island sleeping rough until Caritas helped him find some accommodation in a village.

John feels he is being used by the authorities in Cyprus. “We are the goods,” in the asylum transaction, he says. When asked to clarify, John says that in his opinion, the government is getting money from the EU to support the asylum seekers and once they have the money, they don’t care about the actual people the money was meant to help.

Like many others on the island, he had hoped to arrive in Italy and from there move on to Germany or northern Europe. He seems unaware of the Dublin regulation and says that in other EU countries he is sure that he would be able to complete the studies in tourism he began in The Gambia. 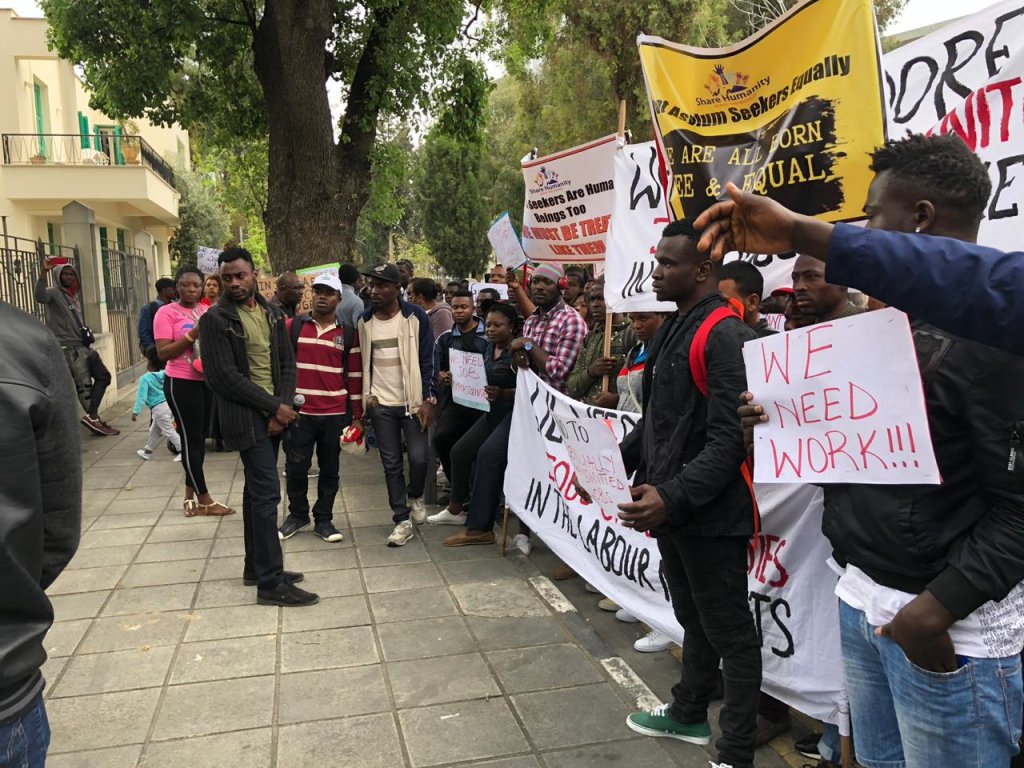 Time for a change?

John was told that his dreams of university are impossible in Cyprus; now he is focused on getting a job. “I would much prefer to work than receive benefits,” he explains. One of the banners at the protest reads “idleness is killing us.” John agrees. He has reached the point where if they offered him 5,000 euros to go home, he would go. “There I could get a job or continue my studies, and actually do something;” he says wistfully.

For now, he is waiting for a notice of interview so he can sort his papers. Chrysanthou explains the protestors marched to the Nicosia District Labor Office and met people in charge; then they went to the Ministry of Labor, Welfare and Social Insurance and met the Permanent Secretary. They ended their demonstration at the EU House where they met with an EU representative as well as the Ministry of the Interior where they also met with a Permanent Secretary. She is pleased that their protest was listened to, and says that change is being promised but time scales are, as yet, unknown. She thinks it will probably take many more protests before the reality facing people like John on Cyprus improves.