The European Parliament has called for an expansion of the EU's border protection authority. However, concerns over jurisdiction are giving many member states reason for pause.

The European Parliament on Wednesday called for expanding the European Union's border protection authority, Frontex, by up to 10,000 officers. The body is also pushing for tighter visa controls.

Four years after height of the influx of refugees into the EU, the European Parliament soberly took stock of the situation during its final session before it sees elections in May.

"The situation for many migrants is still tragic," British Labour MEP Julie Ward, who works with aid agencies in France, said Wednesday in Strasbourg. She pointed out that in many cases, a large number of refugees continue to live in inhuman conditions.

"In Greece, the people are protesting. They simply cannot, or will not, take in more people," said Greek MEP Notis Marias from the European Conservatives and Reformists group. He argued that while aid organizations and the United Nations have critized overcrowding in Greek refugee camps, the number of people reaching Greece by land is on the rise again.

In an official parliamentary report, conservative MEP Roberta Metsola from Malta complained that the joint protection of the EU's external borders — promised and agreed by the bloc on several occasions — had still not been achieved.

"Only if the external border is better protected will it be possible to keep the internal borders of the EU open," Metsola said. Along internal borders, some member states have for years continued to conduct random border controls, though this is supposed to be an exception to the rule. 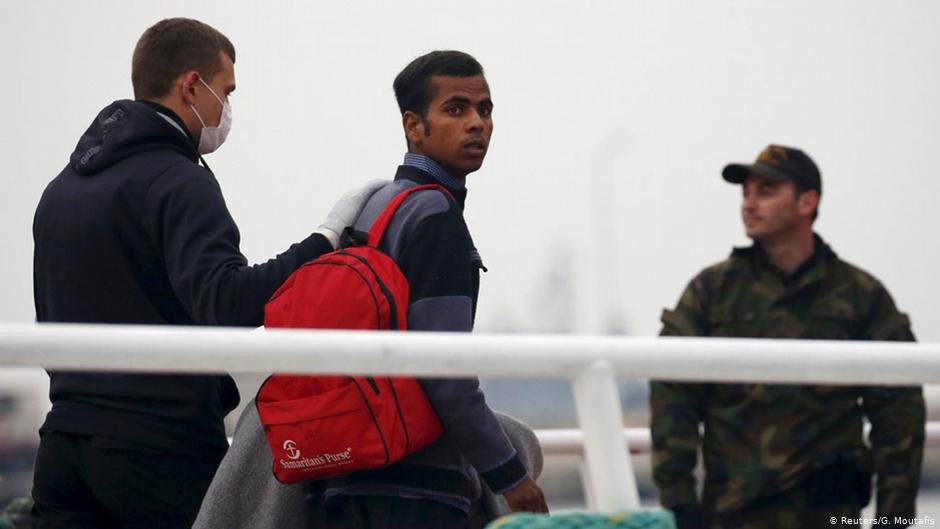 The European Parliament called on the European Commission to change the rules of engagement for the Frontex border control authority and to recruit more staff. A vast majority of MEPs passed legislation to this effect.

The problem, however, is that most of the 28 member states are still not on board. Although in the summer of 2018, heads of state and government initially supported the plan to increase Frontex's staff from 1,500 to 10,000 personnel within three years and to turn the agency into a proper authority with extended powers, this measure has not yet been enacted. As concrete steps have begun being implemented in recent months, more and more member states retreated. They were not prepared to delegate the necessary guards or willing to surrender sovereign tasks, such as border controls, to Brussels.

The struggle over jurisdiction

Italy's populist government has accused the European Commission of wanting to interfere in the domestic affairs of member states, a complaint shared by other members of the bloc. Even Austria and Hungary, two countries that had both strongly supported expanding Frontex, are now hesitant. The establishment of EU Border and Coast Guard Agency authority, for example, which last summer was pushed as an urgent task, is now to be extended until 2027.

The possibility of bestowing Frontex guards with the power, if needed, to act contrary to the will of a member state along its external border has again been abandoned. One MEP familiar with these kinds of jurisdictional dilemmas claimed that there is no way the responsible member states' interior ministers would ever agree to the plan.

"Jurisdictions remains with the member states. The powers, equipment and arming of Frontex border guards will be limited," said Metsola, noting that it was still unclear what would happen to people picked up at borders or on coastlines.

"It is very regrettable that a regulation on distribution is still blocked by the Council of the European Union," said Metsola. Attempts to reform EU asylum law and the so-called Dublin regulation that determines which member state is responsible for arriving migrants also failed during the legislative period.

European Commissioner for Migration Dimitris Avramopoulos believes that progress is being made in expanding the EU's border and coast guard, despite all the reticence. "What we have today cannot be compared with the situation at the border five years ago," he said. "Little by little, we will increase and reach our goal by 2027. This is not a postponement, but a step-by-step approach."

Frontex officials would soon have the right to reject migrants at borders, Avramopoulos said, arguing that with this ability, "illegal migration" could be contained. "If anyone had any doubts about the added value of Frontex, I would point out this milestone," he said. "Today no country can cope with these challenges alone."

After years of preparation and consultation, the European Parliament this week also gave the green light to centralize and cross-reference various databases on asylum seekers, arrivals and departures, wanted persons, and missing passports. Authorities say the new rules will allow border guards to be to be able to identify unauthorized migrants faster. Police experts have long called for the interlinking of databases.

The number of illegal border crossings in the EU continues to fall in comparison to 2015. In 2018, according to Frontex, the number was still 150,000.