Thousands of detained migrants, mostly Ethiopians, are facing serious health risks in Yemen. The UN is calling for the release of the detainees, including several hundred children. There are also concerns that some of the migrants are being forcibly recruited to fight in the civil war.

More than 2,500 migrants remain trapped in a detention center in Aden in southern Yemen, the UN migration agency, the IOM, confirmed on Wednesday. Authorities began rounding up the migrants more than two weeks ago in Aden city and Lahj province, both of which are under the control of the internationally-recognized government.

The mostly Ethiopian migrants and asylum seekers are being held in a football stadium in Aden, where the IOM says the conditions remain "inhumane".

The agency says it has ensured that there are more than 30 functioning toilets in the stadium and it has been trucking in clean water. But the IOM spokesperson in Yemen, Olivia Headon, says detainees have had no changes of clothes or basic hygiene items. "We are worried about outbreaks of communicable disease, with the conditions as they are," Headon says. 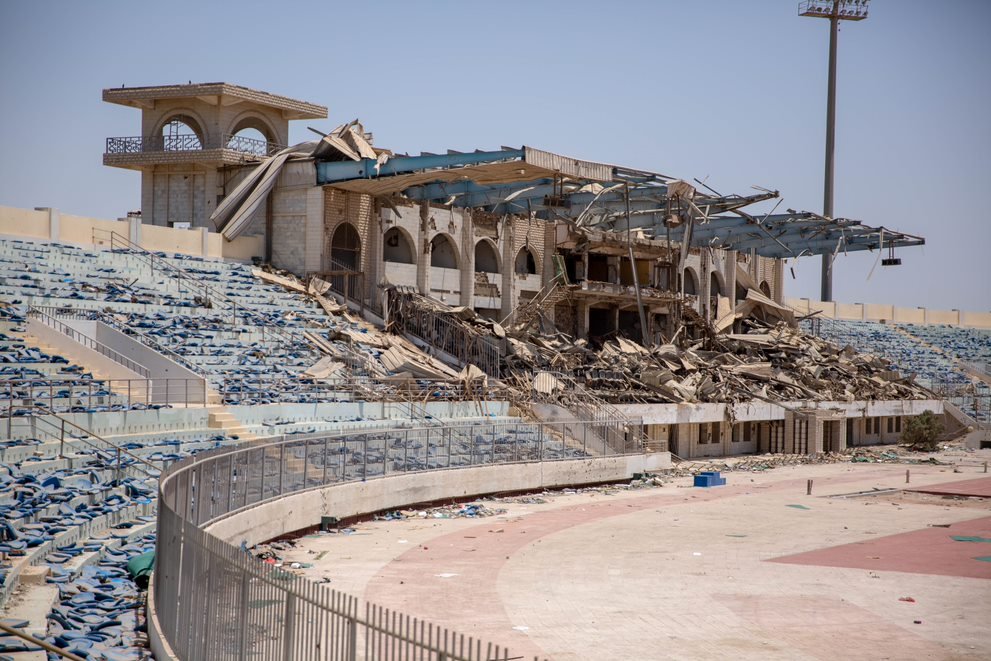 One aidworker told InfoMigrants that they had been sent pictures from Aden of lines of people in "horrific conditions … they were standing eating next to a rubbish dump, there were no toilets." The aid worker said there had also been reports of sexual abuse of women at the site.

In addition to the health risks, the IOM is concerned that military authorities are controlling the stadium, and is demanding that the management of detention sites be handed over to a civilian authority. On April 30, guards shot at some of the detainees in the facility, leaving a teenager critically wounded. Headon says the agency is also calling to have women as guards for women detainees. 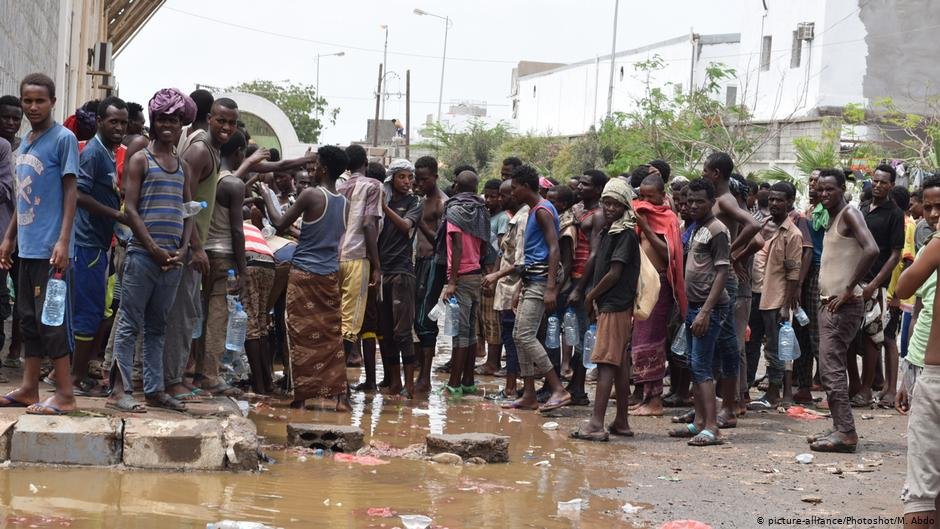 The detention of the migrants, including more than 800 children as well as people known to be victims of trafficking, has created an acute humanitarian situation, according to Sultana Begum from the Norwegian Refugee Council in Sana’a. "NRC is very concerned about the conditions that the people who are detained are being held in, the lack of water, the lack of sanitation and poor services as a whole," she said.

According to reports, authorities released some of the children into the care of Unicef, but as the agency was unable to find a place outside to host the children, it is trying to set up tents inside the stadium.

Further reports that 500 people had been released from a second sports stadium in Abyan could not be confirmed on Wednesday, the IOM said.

Headon says the IOM is still trying to confirm whether 1,400 migrants have been released from a third camp in Lahj in recent days. The agency was denied access to the camp, which is an active military site. Some of the migrants had been suffering from acute watery diarrhea and at least 14 people have died from complications related to the illness since May 1. The IOM said it was treating more than 70 former detainees at a hospital in Lahj. 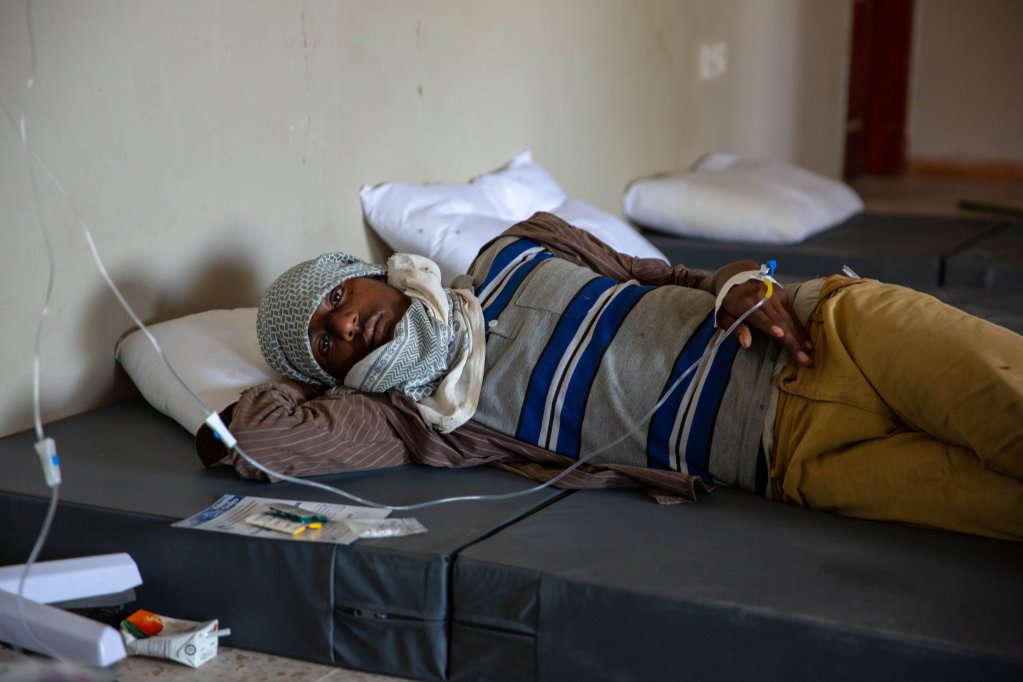 Cholera, a common form of acute watery diarrhea, is spread through contaminated food or drinking water and poor hygiene. It can kill both children and adults within hours if left untreated.

There have been reports that the detained African migrants are being recruited to fight in the war. The government, backed by Saudi Arabia and the United Arab Emirates, has been fighting Houthi militias aligned with Iran for more than four years. A source told InfoMigrants that there was "suspicion" that detainees were being coerced into joining the war effort. "I think that’s one of the main drivers of the detentions."

According to the Yemen Arab news website, Yemeni military sources have accused Houthi militias of training African mercenaries in Hodeidah in the west of the country. They say the militias are paying the recruited migrants $100 a month.

From poverty to persecution

There are thousands of migrants stranded in locations throughout Yemen. Some live in Yemeni communities in rented accommodation while others work as live-in housekeepers for local Yemeni families. Some who are transiting the country are forced to sleep in the open or in houses designated by their smuggler or trafficker, Headon says.

In spite of the humanitarian crisis resulting from the civil war, migrants continue to make the journey from the Horn of Africa to Yemen – around 20,000 migrants each month, according to the IOM. In the first three months of this year, however, there were as many as 150,000 arrivals, almost all from Ethiopia and Somalia. 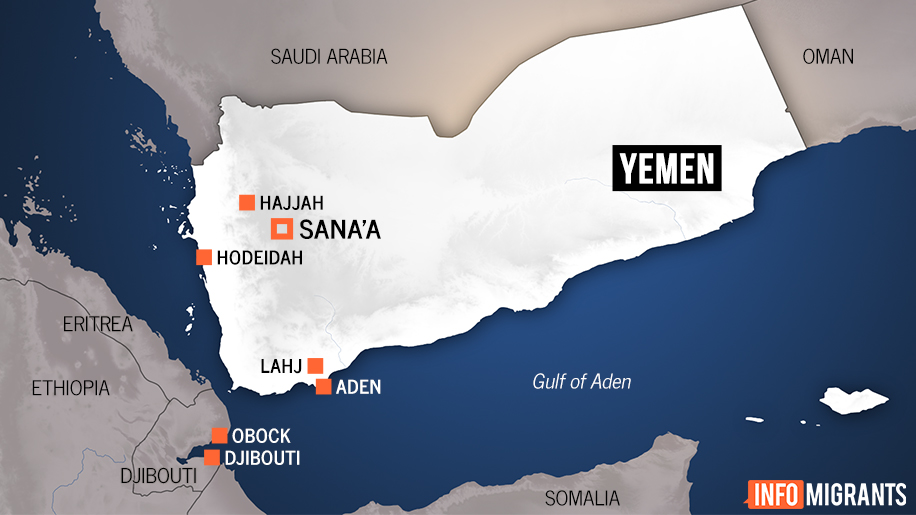 Refugee aid organizations say the migrants leave their countries because of unemployment, drought, conflict and political upheaval or human rights abuses. "Many people we talk to tell us it is because there are no jobs at home," Headon says. "They say they want to make their future better than the life their parents have or what they experienced growing up."

The risks the migrants face crossing the sea and then the Yemeni mainland in an attempt to reach other countries in the Gulf region include kidnapping and extortion, being trafficked or detained, or dying even before they reach Yemen. "Even a couple of weeks ago my colleagues told me of just tragic situations where you’ve got migrants just drowning in the sea," Begum says.

Tragically, some migrants do not know that there is a conflict in Yemen, or are not aware of the extent of it, according to Headon. Others think that the promise of what the Gulf countries could offer outweighs the potential dangers of the route. "Smugglers come to their villages and sell the dream of opportunity in the Gulf countries to them," Headon says.

The campaign of arrests of migrants that began in April is believed to be aimed at repatriating the Africans, who authorities say are in the country illegally.

The IOM announced this week that it hopes to evacuate 237 Ethiopians to Addis Ababa under a voluntary repatriation program. Begum says the NRC believes another solution is needed. "[Migrants] are being held in such poor conditions, we don’t think they’re in a situation where they can make an informed and voluntary decisions about their future and where they can go."