Integration courses in Germany: What are they, and who can take part?

Migrants in Germany are expected to learn the language and become familiar with the country's history, culture and legal system. That’s where integration courses come in. But what exactly are these courses, who can participate, and how many people are taking part?

According to the Federal Office for Migration and Refugees (BAMF) statistics, more than one million people have taken part in integration courses in Germany since the beginning of 2015, almost half of whom were refugees from Syria, Iraq, Iran, Somalia and Eritrea. Around 25 percent came from other non-EU countries, and the remaining 25 percent were participants from EU member states.


Over the last few years, the share of persons who completed the course with a B1 level has dropped from roughly 70 percent in 2015 to almost half last year. BAMF attributes the drop primarily to the changing composition of participants.

Experts from the Heinrich Böll Foundation and others criticized that the integration courses hadn’t been sufficiently adapted to the needs of the new course participants. Moreover, the study groups were too large given the educational requirements.

InfoMigrants has compiled key information about integration courses for migrants:

What are integration courses?

Introduced as part of the Immigration Act of 2005, integration courses are mandatory if “you cannot make yourself understood in German at a simple, adequate level.” According to the Federal Office for Migration and Refugees (BAMF), the “immigration authority will decide if attendance is required when it issues the residence title to you.”

Integration courses consist of a language course (600 hours) and an orientation course (usually 60 hours). The languages course, whose goal is to convey B1-level skills, covers “important aspects of everyday life,” including work and career, bringing up and raising children, leisure time and social interaction as well as media and media use.

While topics vary depending on the type of course (a youth integration course, for example, deals with topics of particular interest to young people such as applying for an apprenticeship), every participant will take intermediate tests to “prepare for the final examination.”

Although the general rule is such that attendees take the integration courses on a full-time basis, part-time courses in the afternoons and evenings are available, for instance for employed participants.

Where are participants from?

In 2018, roughly 24 percent of new participants came from EU member states. Roughly 19 percent were Syrians, and around seven percent each were Afghan and Iraqi. In the last years, the composition of the courses changed significantly: While almost half of the participants in 2014 came from EU member states, roughly two-thirds had a refugee background two years later. 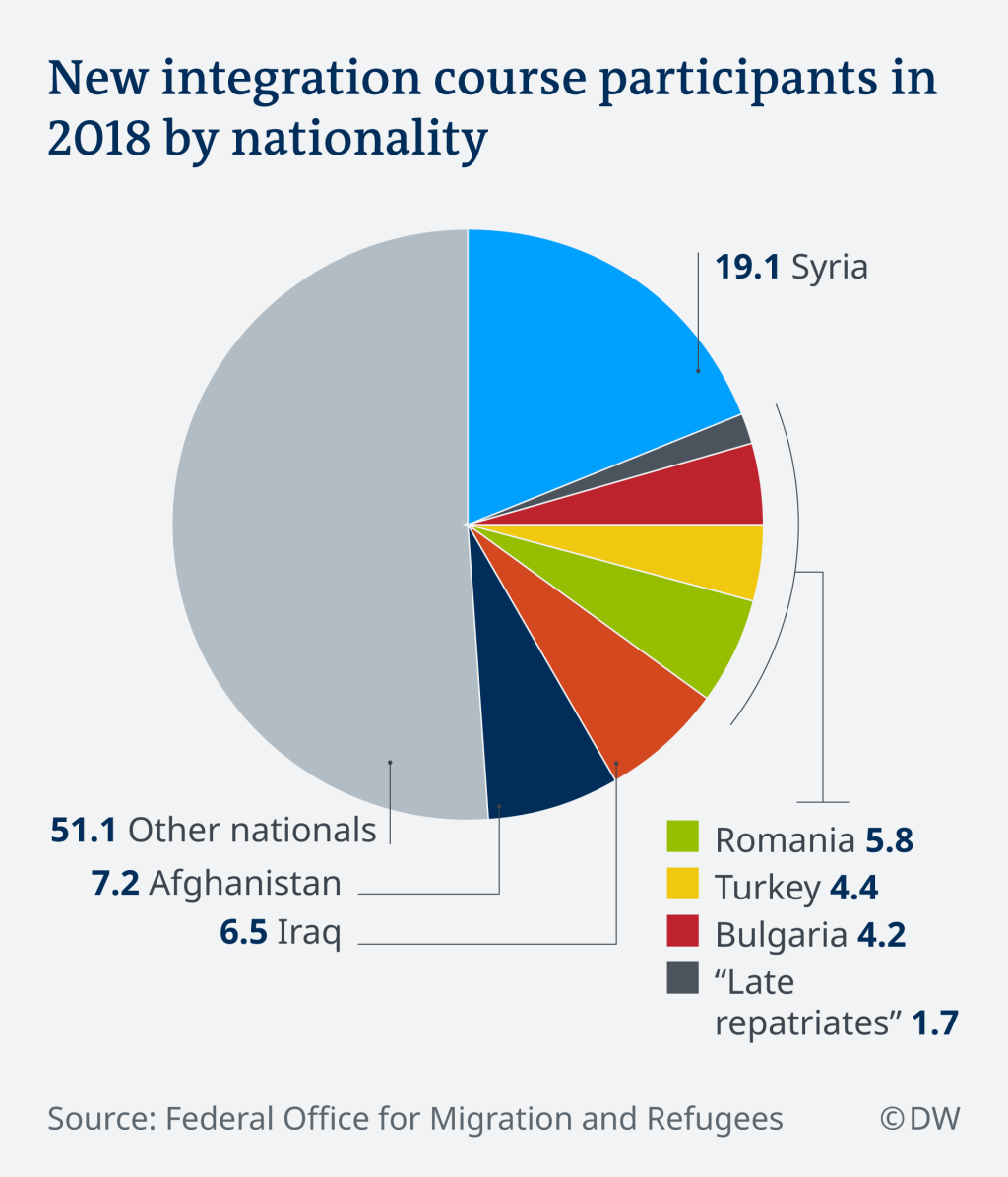 Signing up and attendance

Before the integration course begins, the provider will carry out a placement test. “The result will help determine which course module you should begin with and whether it would be useful for you to attend a special integration course,” according to BAMF.

To sign up for a course, participants need to send the application, available here (German only), to their regional BAMF office, which they can find here.

Once you have received a certificate of eligibility (“Berechtigungsschein”) from the foreigners' office (“Ausländerbehörde”), you need to choose a course provider in your local area with the WebGIS search engine. Alternatively, you can “obtain a list of course providers from the immigration authority or from an immigration advisory service (“Migrationsberatungsstelle”).”

Next, you need to submit your certificate of eligibility and register for a suitable course with the help of the course provider, according to BAMF. During the course, you have certain rights and responsibilities:

If you pass the final examination, which consists of the "German test for immigrants" (DTZ) and the "Life in Germany" test, you'll receive an integration course certificate ("Zertifikat Integrationskurs"). According to BAMF, it not only "certifies an adequate knowledge of German and important basic knowledge of German society," it also helps with naturalization as you may apply for German citizenship after seven instead of eight years of lawful residence.

How much does it cost?

Each lesson of the integration courses costs €1.95, which means the overall cost for an integration course (660 lessons) is €1,287. According to BAMF’s website, participants have the option to pay per “course section of 100 lessons,” which amounts to €195.

You can apply for cost exemption under certain circumstances:

You may also be eligible for refunds under certain circumstances:

A representative survey of refugees from 2017 showed that 50 percent of those have either taken an integration course or finished one. Among recognized refugees, that number was 60 percent; among those with a tolerated stay it was 34 percent; and for refugees still undergoing the asylum process, it was 31 percent.

Participation in an integration course is mandatory for refugees if the asylum request is approved and the foreigners' office orders the participation: For instance, if their German skills aren’t sufficient or if they receive unemployment benefit II (“Arbeitslosengeld II”).

Since 2015, the following people are eligible for participation of integration courses, provided enough spots are available:

Some of the following people "are not entitled to an integration course:"

Under the following circumstances, you must not be obliged to attend the course:

How did participants perform in 2018?

What else you need to know