On Thursday, more than 60 migrants were picked up by two Italian ships: a naval ship and a private NGO vessel. While Matteo Salvini, Italy‘s Interior Minister and leader of the right-wing League (La Liga) party, reiterated that the ports should remain closed, Prime Minister Giuseppe Conte, has agreed to open the ports. All the migrants were disembarked Friday.

Two Italian run boats plucked more than 60 migrants from small dinghies in distress in international waters. Both have requested a safe Italian port in which to disembark the people aboard.

May 9, 2019: The Italian navy tweets a press release explaining it has picked up 36 migrants, among them two women and eight children.

The tweet makes it clear that the people they rescued were aboard a small dinghy “in danger of sinking.” The longer press release explains that they were around 75 kilometers from the Libyan coast, so in international waters when the rescue took place. The boat in question, a patrol boat called Cigala Fulgosi, was patrolling the central Mediterranean as part of the Operazione Mare Sicuro (Operation Safe Seas).

‘In accordance with international conventions’

The navy says that the people they rescued were not equipped with lifejackets and that their boat was taking in water. “So in strict adherence to the national and international conventions, a rescue took place.”  The navy also announced it would run medical and identity checks and coordinate with the national authorities.

May 9, 2019: The Italian-led NGO Mediterranea Savings Humans tweets that its ship, the Mare Jonio, picked up 29 migrants from another small dinghy in the central Mediterranean. Again a few women, two of whom are pregnant, a one-year-old child and four unaccompanied minors are aboard:

The NGO tweeted that it too, was in touch with the Italian authorities to request a safe port, from which to disembark the people they have picked up. They were told to “coordinate with the Libyan authorities.” Their answer: “What, coordinate with a country at war where the concept of human rights doesn’t exist?”

Could Italy’s line be softening?

Early on May 10, the Mare Jonio tweeted that they had entered Italian waters.

🔴 A few minutes ago #MareJonio@GDF; reached us for a “police control”. We are asking for a safe port.

The Italian Interior Minister, Matteo Salvini, in the midst of his election campaign for the European elections at the end of May, immediately tweeted that Italian “ports will remain closed, to those boats from the ‘centri sociali’.” The ‘centri sociali’ he refers to are essentially left-wing and or anarchic social movements which formed around social centers and sometimes in illegal squats from the seventies onward.

Salvini’s usual tough approach seems to contrast with reports from Italy’s Prime Minister, Giuseppe Conte on official European business in Romania. He not only gave permission for the Italian naval ship to disembark the people rescued in the military port of Augusta in the province of Siracusa, Sicily, but also, according to reports in Italy’s left-leaning daily La Repubblica, had obtained promises from fellow European countries that the people on board would find safe havens across the continent.

Salvini, whose party, according to the latest polls published in Italian newspapers, appears to be losing popularity, (in contrast to his fellow governing party, the Five Star Movement), was forced to concede to Conte regarding the military. Now it appears, he may have to concede regarding the Mare Jonio too. According to reports in La Repubblica, the message coming from the “Viminale” the historic palace in Rome which houses both the Prime Minister’s office and the Interior Ministry, appeared to have slightly softened. 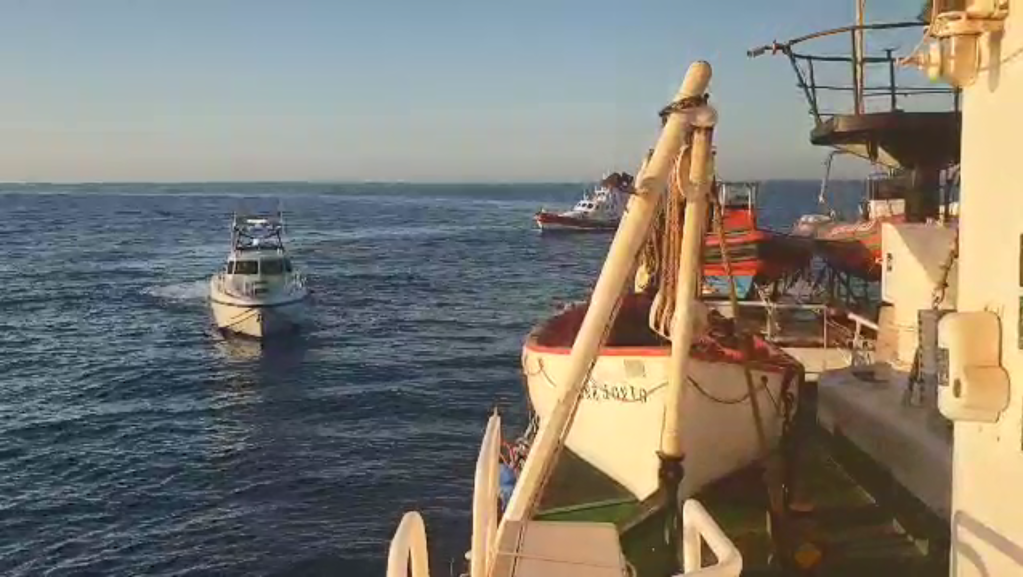 The captain of the Mare Jonio entered Italian waters at dawn. After a “police control” by the Italian Guardia di Finanza, the expected order to halt was not given and the ship is now proceeding to Lampedusa. According to La Repubblica, it will be up to the coastguard and local magistrates in Agrigento to decide whether or not to impound the ship and investigate the crew, but the 29 migrants aboard that ship may just be allowed to disembark too.

At 10:45 a.m. local time, the Mediterranea Saving Humans website in Italian posted an update. “The Mare Jonio is on its way to Lampedusa to complete its rescue mission and disembark the people on board. We are being escorted by a boat from the Italian tax and border police Guardia di Finanza."

At around 12:30 p.m., the NGO tweeted that they had arrived in Lampedusa and that the 30 migrants onboard will be landed.

Translation: "The 30 shipwrecked migrants / rescued migrants are about to be disembarked on Lampedusa. In their smiles, we can see the sense of what we do./ In their smiles is the reason for our undertaking. They are safe and that is the most important thing."

In an interview with Italian national TV news agency Vista, Prime Minister Giuseppe Conte denied that there were any differences in policy between himself and Salvini regarding migration. When asked whether the two ships being allowed to dock meant that Italian ports were now “open” again, Conte answered that the two cases were “completely different.” He thanked the Italian navy for intervening and “saving lives,” and explained that since he had been at a European summit anyway, he “took advantage of being in a room with so many European leaders” to get agreement from them on taking on some of the rescued migrants.

On the Mare Jonio case, Conte talking to Vista underlined again that he had talked to Salvini and officials at his interior ministry and that he was “OK” with what was happening and was proceeding with impounding the Mare Jonio. Rai, Italy’s public broadcaster reported that the Mare Jonio was being investigated for aiding and abetting illegal immigration. Conte said that he did not want to comment on that case as it was a “judicial matter” and they would decide if any action needed to be taken.

Vista’s reporter asked Conte what was going to happen to the migrants on board the Mare Jonio, and Conte answered: “obviously they have been disembarked and they are being medically checked.” The reporter asked him if that meant all of them? Conte replied, “of course, what do you think, that Italy would send them to prison or let them drown?”

Asked again if the statement by Salvini saying “these ports are closed” was just rhetoric, Conte replied “rhetoric? Not rhetoric? I will continue to repeat what I have said time and time again when I am asked this question. Our immigration policy is wide-ranging. We work with developing countries from where many migrants are coming; we work with transit countries; we work with our allies to try and solve the problem of migration. If you want to get fixated on whether or not we will disembark people in Italy, then the policy of the entire government is, and always has been: that we want to stop feeding the traffickers and creating conditions in which they can flourish. We want to make sure that these traffickers are not profiting off the backs of these poor people who are facing death and misery trying to make it across the Mediterranean.”