London's 'Happy Baby Community': A safe space for migrant women and their children

The “Happy Baby Community” is a charity supporting migrant mothers and their babies. It was set up in 2014 by a small group of mothers – together with two volunteers - who had fled to the UK to seek protection for them and their children. Five years later, the group has grown to include around 450 mothers, more than 480 babies and children and 65 volunteers in two locations in London. InfoMigrants' Emma Wallis visited the center in Hackney to find out more.

“When I walked in here, it was like a big hug,” beams Tiana* from Nigeria. Tiana is 34 years old. As her two-year-old son plays with toys and other children, she explains why she loves coming to the Happy Baby Community. “I was referred here by the refugee council, through my therapist. They said this place is a good place for women, it elevates and encourages them. [...] This place is like home.”

It is not just Tiana who feels at home here. All the mothers who arrive throughout the morning have shining smiles as they meet other mothers and are hugged by the volunteers. Prams are lined up in the hallway, some of the smaller babies and toddlers sleep in their pushchairs, others run excitedly around, grasping toys and puzzle pieces, interacting with their own mothers, other mothers and fellow children.

In one corner, piles of wool and knitting equipment are laid out. In another, mothers and children join in a singalong and drumming session. Others arrive to attend the English classes and get the support of a volunteer to keep an eye on their baby while they study. The rest of the time, the group is all about mothers interacting with their children during play and activities. Osteopath Lucy Bracken and perinatal expert and birth supporter Jill Benjoya Miller, along with about seven or eight young mothers, had the idea to start the group in 2014.

“It was Lucy’s vision really,” says Jill proudly. Lucy, she explained was volunteering with the Helen Bamber Foundation which works with asylum seekers and refugees who are the survivors of extreme human cruelty. Lucy had identified a need among the young mothers who were “completely alone in the asylum system and really in this country on their own.” At that time in your life, when you have just had a baby, explains Jill, “you really need other people around you.” So Lucy put out a call and Jill answered.

At the beginning, remembers Jill, “we had a cup of tea with about seven or eight women in the Helen Bamber Foundation, and it was completely grassroots. We gave them a hug and gave them some really nice yoga and breathing. And it just grew and grew.”

Five years later, their small group has become an independent charity, with two locations in London and helping over four hundred mothers and babies. About sixty women come each week to each group but the numbers and people vary and evolve, explains Jill who exudes calm and competence in a whirlwind of activity and babel of languages. Even during the interview, she deftly jumps up, when a baby in a pram starts crying, and rocks the pram soothingly until the baby quietens. A minute later his mother is back, Jill hands over smoothly and resumes where she left off. 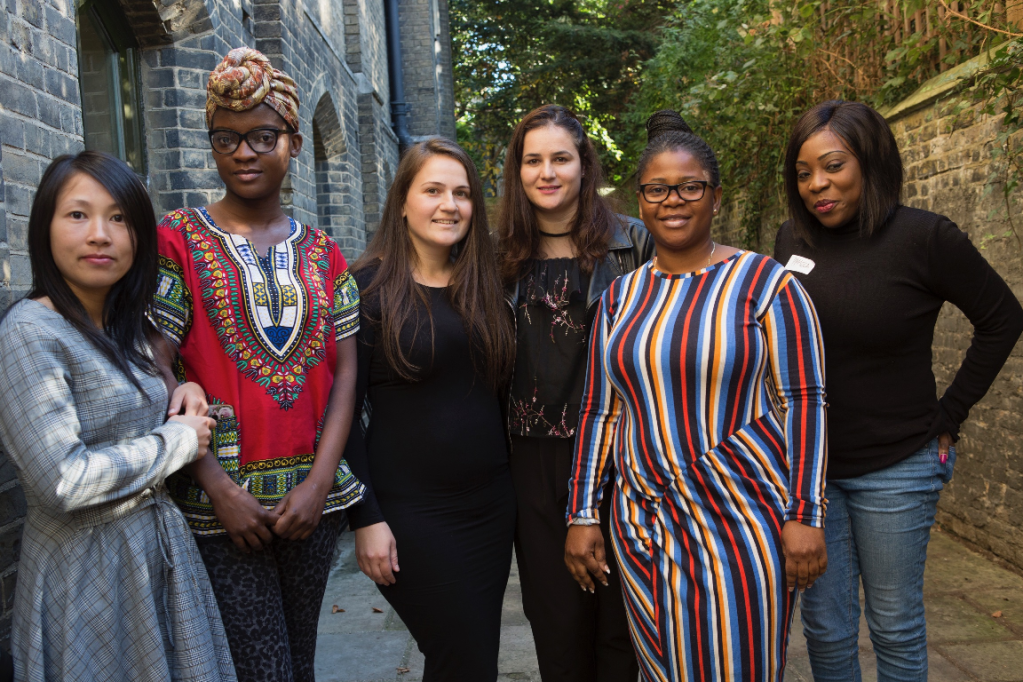 “It was this amazing group of people who all just wanted to do something for other people. [...] We have so many people who want to be part of the fabric and give something for these women. And now the women themselves are holding the community.”

Some of the women who came for support now come as volunteers, to give something back. Women like Amy* from Albania, who is one of the founding members of the group, Zara* from Ethiopia and Antonia from Nigeria. As Amy, now 27 explains, “I know the importance of this place, they support us and I want to do the same thing and carry on helping this group.”

Antonia is a shining example. She joined the group in November “at a low point in my life.” She is now volunteering at four different groups across London, helping migrants like herself and giving back. “I am the kind of person who loves caring for people. […] I believe in service to humanity and helping vulnerable people and giving support and advice and having empathy towards people.”

Amy says she was studying to be a nurse in Albania. She clearly doesn’t want to talk about her past, although, with downcast eyes, she intimates that she left because of “safety issues.” Questions are not asked in the group, explains Lucy, it is much more about giving people a safe space to just be accepted as they are.

“Just having someone being so open and welcoming is a lot. It is empowering people a lot,” thinks Amy. “We are not stupid, but when you arrive and you have no English, then it prevents you from communicating the kinds of things you are capable of doing.”

Amy is learning that her skills, and she herself, are very useful to others. Besides the English lessons, a new leadership program is teaching her to take responsibility for others in the group. “This program is such a good thing. It makes you feel that you are not just an asylum seeker, and you are not just someone who can’t do anything. But that you can be useful in your way, in this amazing place and you can help other people get through very difficult situations.”

30-year-old Zara* has also acquired confidence through the group. She is half Ethiopian, half Eritrean but fled Eritrea because she was unable to practice her Pentecostal religion. She explains that an uncle in Norway helped fly her to France  -- from there, she got on a lorry to the UK. Her asylum application was granted relatively quickly, Zara said. She explains that although she was scared trying to get to the UK, she had to do it to “save her life.”

Quietly spoken and calm, she said she found it hard at first in Britain. She felt isolated and didn’t go out. The Happy Baby Community changed things for her. “I feel like it is my home now.” The group, she explains, has helped her with clothes for her baby, beds, highchairs, everything. But aside from the practical help, she feels the group has given her “confidence and self-esteem.” 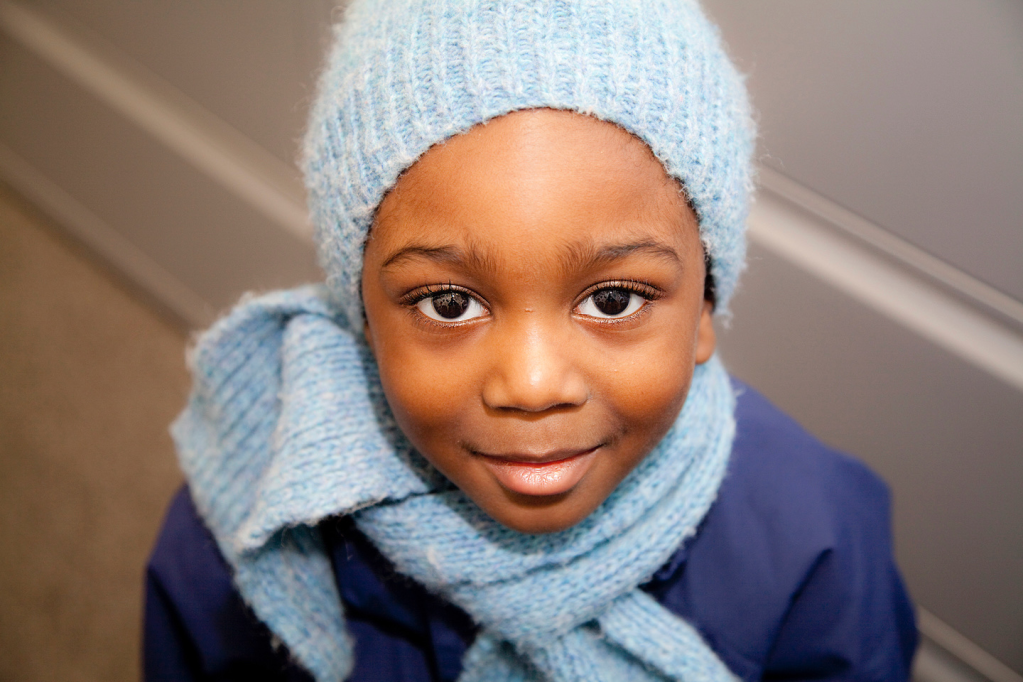 Confidence and skills are two of the things the group hopes to impart. Although many of the women present have escaped violence or trafficking of some kind in their pasts, those things are left at the door.

It is about looking forward explains Jennifer from China. “I like more talking about the plans for the future and how I can easily find a job. I think it is hard to find a job. If your English is not good enough then they might not take you, so it is hard.”

Like many of the women, Jennifer has been in the UK for around ten years. Now 28, she has British citizenship and two children. She constantly refers to her ‘bad’ English but can confidently chat away about how hard life was in China for a sustained amount of time. She explains that the Chinese government fines you if you want more than one child and doesn’t care about individual people but only about “making the country strong.” Having individual choice has been a revelation for her in London and the confidence to make those choices was built through her work with the group, Jennifer explains. “Being here, I have met so many different people and I realize I am not scared anymore,” she says proudly.

The group has helped her look for jobs on the internet. As soon as her 21-month-old daughter is at school, Jennifer hopes to return to work in the beauty sector, doing nails, as she used to. “I had the beauty job for about four years. I hope I can go back to do that. It is nice talking to customers and learning new things, that makes me happy.”

Jill says that many of the women are keen to attend talks about how to get back to work. Contrary to the expectation that trafficked women must be so vulnerable that they have nothing to offer to society and need tremendous amounts of help, Jill explains that many of the women who have attended the group have degrees and significant skills.

“So many of the women who come to the group have trained and been skilled in all sorts of different professions. Those skills aren’t valued and they are not able to use them. It is hard enough just getting by and getting through the system and to settle and recover. They don’t get to use the skills that they have which are really amazing,” thinks Jill.

That’s where the leadership training comes in. Jill and Lucy want to help hand over the day to day running of the group to the women themselves. They hesitate to use the word empower, because their work and experience has shown them that these women have come together to empower and nurture themselves. 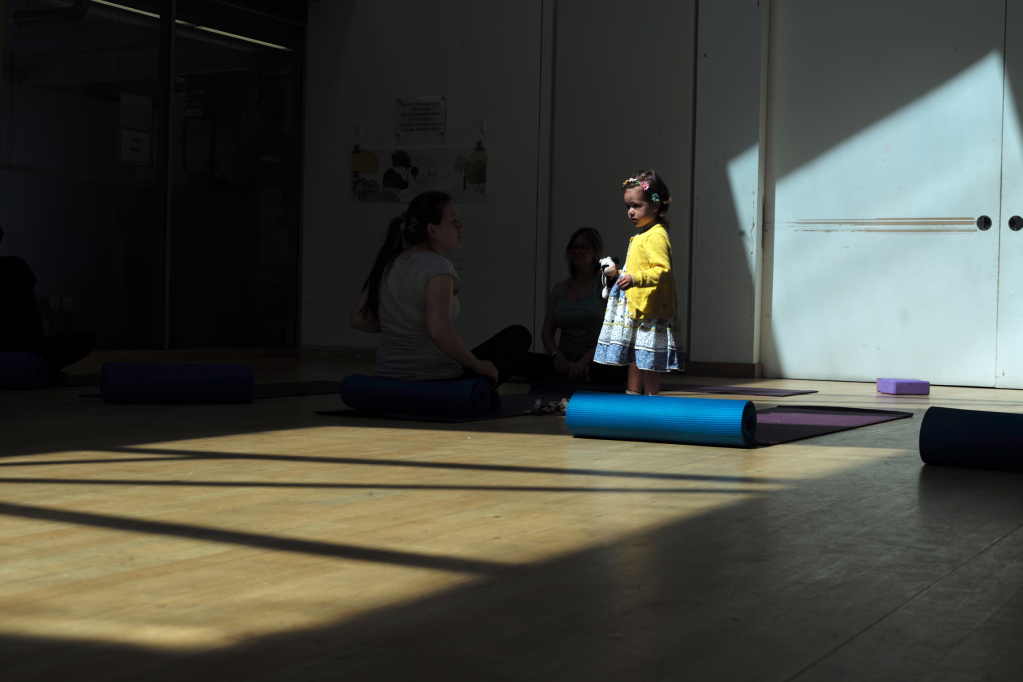 Tiana says she wishes the group ran every day. On other days, she says she “hides alone in the house,” afraid of “being judged, because of the devils inside I am fighting. At one point, when recounting how she ran away from an abusive marriage in Nigeria and was forced to leave her two older children behind her she breaks down in tears. Her two-year-old is what keeps her going. “I feel like I have been given a second chance,” she smiles. “I have someone to love and someone to cuddle. We do everything together.” Her son, and the Happy Baby Community are her favorite things to do in London, “it has given me hope and it has given me strength,” she concludes simply.

The yoga teacher Dina, from Ourmala (a group providing yoga for refugees and asylum-seekers), comes around to see who is joining the yoga group today. Massage therapist Beverlie already has a queue of mothers and their children forming outside her door. Meanwhile, the team from Food Cycle start to prepare food in the small kitchen. The circuit of rooms is filled with enticing smells of stews, pasta, salads and vegetables. Antonia busies herself filling jugs full of water and laying out some of the donated food and smoothies on the clusters of big round tables for the lunch later.

Jill hopes the group will continue to get more and more vibrant. She sees the women gaining strength from each other. The ethos that she and Lucy have instilled is making sure that everyone who comes through the door is recognized with a hug and a friendly smile. “I hope that means something. I know people moving through the asylum system feel more or less invisible and I think it is good that they feel it matters that they are here.”

* all names have been changed