A radical right-wing party in Germany called Der Dritte Weg – 'The Third Way' – openly aligns itself with the Nazis and pushes a 'Germans only' platform. Authorities say they can do nothing, reports DW's Ruth Krause.

In Plauen, a region in Eastern Germany, volunteers in the office of the Der Dritte Weg political party collect used clothing for the poor. The Third Way is a party of and for the people – the German people. The second-hand clothing is for the use of Germans only.

The ideals of the members of The Third Way are nationalist and anti-European. They include redrawing the map so that German borders go back to where they were before the second world war, cutting through the middle of Poland. They also say German women should have more children, and immigration should be stopped.

“My ideal Germany is a country where politicians have the final say,” says Tony Gentsch, from Der Dritte Weg. “They should always put the interests of Germans first. We support the borders being closed. We believe this foreign infiltration cannot continue.”

Marches by members and supporters of The Third Way have become a common sight in Plauen. The last one at the beginning of May looked much like the marches that took place during Hitler's third Reich, complete with torches, flags and drums. Demonstrations like these have polarized the local residents: “They were allowed to carry torches, to wear uniforms. It was creepy. I find it a bit frightening,” one woman said. Another man described some of the party's ideas as “impeccable”. 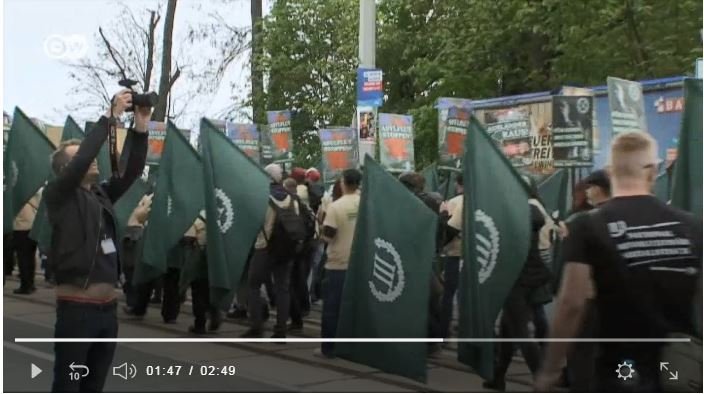 Local authorities have the power to decide whether groups are allowed to demonstrate. If protesters wear uniforms or there is a threat of violence, they can stop a rally from taking place. But authorities have yet to ban any of the activities of The Third Way. They say the most recent demonstration was neither violent nor intimidating, and there were no grounds to prevent it.

East German authorities have sometimes been accused of not using the full extent of the law against right wing groups. Some say they play down the threat these groups pose, or turn a blind eye.

“It's about rights and the rule of law,” Roland Wöller, Saxony's interior minister, insists. “I think it's important that the playing field is extended as far as possible, though sometimes I would like to see more courage from authorities.”

But restricting the neo-Nazi demonstrations would not be enough, says Hajo Funke, a political scientist. He supports a complete ban of the organization. “Their ideology and their orientation is fundamentally the same as national socialism,” Funke says.

The legal requirements for a political party ban are high in Germany. For now, The Third Way is free to demonstrate and to contest elections. A German court this week ruled that the public broadcaster ZDF must agree to air the party's election campaign clip for the forthcoming European ballot.