Opening your home to a foster child, that's something many people are hesitant to do. A British couple has taken the step and welcomed Ife to their family. She is an underage refugee from Ethiopia who arrived in the UK alone one year ago. InfoMigrants' Emma Wallis visited the family in their London home.

‘Ife’* is from Ethiopia. She has just turned 17. She arrived in the UK alone just over a year ago; after more than a year crossing land and sea from Ethiopia, via Libya, Italy, and France. Along the way she was detained in Libya after falling into the hands of people smugglers. One of her brothers is missing and she has had no contact with her mother who doesn’t know if she is alive or dead. Today though, she is smiling in the house of her foster parents, Fiona and Peter.

“We bond over cooking,” says Fiona smiling as she fills the kettle to make tea. Ife smiles too, as she carries Fiona and Peter’s youngest daughter into the kitchen. Their daughter clearly adores Ife, her arms are wrapped tightly around her neck before loosening slightly so they can settle down to read a picture book together.

“Our daughter waits by the door for when Ife is coming home,” says Fiona. “She’ll never forget Ife, she will always be a big sister to her. Our daughter is the youngest and her other siblings are all much older and so she spends more time playing with Ife and pestering poor old Ife. It has had a really positive effect on her. It has been of great benefit to all our family.”

The warmth in the family is palpable. Dogs run around the kitchen and a cat jumps nimbly from bench to table and kitchen side before settling in a sunny spot in the plant-filled courtyard.

Ife is fasting today, in the middle of Ramadan but she sits quietly at the table as we talk, answering questions. When she is not fasting, she smilingly describes the English dishes she has learned to make, “macaroni cheese” and “banana cake.” The family have also enjoyed discovering some of Ife’s home cuisine, Injera (the pancake-like bread made from fermented Teff, an ancient grain) and Doro Wat (a chicken stew). At the mention of Doro Wat, Ife’s smile gets even wider. Part of the family

Fiona grew up partly in Algeria and Libya and the family are well traveled. An ornately carved Indian door graces the entrance to the cloakroom, the kitchen cupboards are packed with spices. “At the beginning, we mostly just smiled and pointed at things,” says Fiona, “but now Ife and I can really chat.”

We try and treat Ife like our own children but sometimes her immigration status makes that difficult, explains Peter. “Yes,” agrees Fiona. “For example, when she turned 17 I wanted to get her a provisional license and get her some driving lessons but the DVLA [Driving license issuing authority in the UK] wouldn’t accept her documents and won’t issue her with a provisional license yet.”  Ife also can’t yet travel with the family if they go abroad. When they went to Cornwall though, she was very much there, running and playing on the beach and gazing out at a very different sea than the one she crossed alone.

Prior to arriving in the UK, Ife explains, with some help from Fiona, that she spent about eight months in the Calais refugee camp. She agrees she was often scared there although she says the other Ethiopians in her part of the camp were kind to her. She explains that the camp was divided between different sections for each nationality. “The Afghans were often fighting,” she says, dropping her eyes to the floor. When it was very cold, some local French people allowed the girls in the camp to come home and shower and stay a night. “When it was very cold, snow, French people come, take home, sleep, shower, just the girls, no boys,” she laughs.

England was not really her goal. “It was by chance,” she says. In fact, say Fiona and Peter, it seems Ife didn’t want to leave home at all. Her older brother was imprisoned, perhaps for political reasons. She was happy in school but one day, another brother turned up at her school and said they had to flee immediately. She didn’t even get a chance to say goodbye to her mother, with whom she still has no contact, despite extensive attempts to search for her via the Red Cross and other organizations.

“It bothers me, knowing that Ife’s mother is out there not knowing whether her daughter is safe and happy and well,” says Fiona earnestly. “I don’t think we will be happy until we know that she knows she is safe and well. That is something as a mother, I can’t imagine how frantic she must feel. That will be a happy day when at some point there is some contact.”

Their flight meant that brother and sister were captured in Libya and at some point separated. Ife still doesn’t know what has become of that brother. Somehow, she got across to Italy and all the way to Calais.

She had no idea what to expect from the UK but she remembers that most of the people handing out food in the Calais camp were English so she thought that English people must be “kind and nice.”

Finally she managed to find a caravan in which she could stow away with four others. The owners, she said, were shocked when five people jumped out from behind their car and ran off along the motorway in southern England.

Somehow, Ife and a girl she had met on the journey found their way to the Home Office in Croydon. “One white person from a church drove us [to Croydon],” she says. From there she was placed in a foster family in Hampshire for a short period of time before eventually finding her way to Fiona and Peter’s house.

“Ife is our first foster child,” explains Fiona enthusiastically. “I just want to encourage other families who have a spare room and some time to do the same. You learn a lot, you give a lot, it is quite enjoyable. You feel really happy when you see people starting to flourish. It’s a lovely thing to do and I just think people shouldn’t be worried about trying it.” “Ife is just so easy, we have been very lucky. Not one cross word in over a year,” adds Peter. Ife smiles quietly at the table. However, becoming a foster parent in the UK is not particularly simple. Fiona and Peter were raring to go once they decided that they would like the chance to be able to offer a home to an unaccompanied minor. What followed was ten months of basic foster training which all foster carers in the UK are required to undergo. They have also taken part in a pilot scheme run by the International Organization for Migration (IOM) and Croydon Council to help train foster carers who might be looking after children who have been, or are at risk of being, trafficked. They still feel that more training about how to deal with the various different cultures and needs of foster children from other countries might be helpful for those in the future.

Planning for the future

Back at home, Ife explains that she is studying at college in order to gain access eventually to the British education system. She would like to be a nurse, “I love caring for people,” she says shyly. Foster carers in the UK receive about 1600 pounds a month before tax to look after a foster child. This includes an allowance for the child as pocket money and enough to start a small savings account for them. Fiona and Peter foster through TACT (The Adolescent and Children’s Trust), the UK’s largest fostering and adoption charity with headquarters in London.

Whilst he doesn't want to put people from the rest of the country off fostering, he thinks London and other big cities are good places for young unaccompanied minors to be. “London has a pull,” says Peter, “because there are lots of other children from the same parts of the world. There is a mosque that Ethiopian people go to, there are restaurants, there are people speaking her language.There’s a lot for Ife here,” he concludes.

Fiona nods, explaining how as soon as Ife arrived they took her to the Ethiopian women’s refugee center and various other organizations to help her start to feel at home. They are both pleased that there are some other children who speak her language at college so she can have a chat and feel at home. 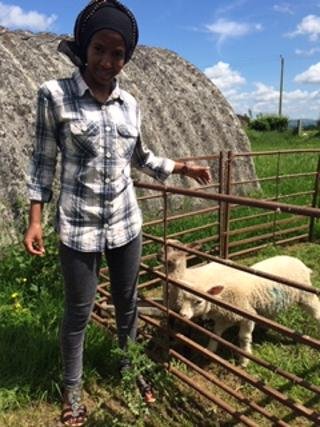 Normally when foster children reach 18 they often leave the family and go into hostel accommodation. “We are hoping that Ife will stay put. We want her to and she wants to,” says Fiona. That means if she stays in education she can stay with the family until she’s at least 21. However, they are still waiting for her migration status to be decided which has put an additional burden on everyone. “It’s very unsettling,” says Fiona; “it makes children feel very unsettled.”

“One of the reasons I wanted to look after an unaccompanied minor,” explains Fiona “is that I had grown up abroad. I was quite well placed to know what it is like […] to arrive in a completely alien setting, where the food is different, the language is different.” She says that other people were rather discouraging, saying “won’t it be dangerous, and couldn’t it disrupt your family?”

Fiona concludes: “I think more people would do it if they realize what a positive thing it is. It is not dangerous, you just have to be willing to put in the time and effort. […] We have been very lucky. I am sure there are lots of other equally delightful children out there but Ife has been that child that we were hoping for.”

Ife nods too. “I am very happy here too,” she whispers and beams.

*Ife’s name has been changed to protect her identity.