Refugees finding their feet in a new country face all kinds of challenges. So how to unwind, let off steam and make new friends? In Berlin, women from Albania, Syria, Afghanistan, Somalia and Iran have found an answer in coming together on the football pitch, as DW's Holly Young found out.

In a wood-paneled school gym in the center of Berlin, the group of women meets to train whenever it’s too cold outdoors. The team was set up in 2013 by Champions Ohne Grenzen. The players come from Syria, Afghanistan, Somalia and many other countries. As far as the coach knows, it’s the only football team in Germany specifically for adult refugee women.

One of them is 19-year-old Hava, who came to Germany in 2014 from Kosovo. “With football you feel freedom. It doesn't matter if you're happy or sad, you just go out and do it. It makes your stress go away."

Hava is one of the longest-standing members, and fits the practices twice a week around school. At the moment she lives in supported youth housing, because two years after they came to Germany, her family were deported, leaving her alone in the city. She first heard about the team when one of the team’s coaches visited her refugee shelter in 2015. She remembers how nervous she was at the first practice.

“I thought it would be really hard, and that maybe I couldn’t do it, and that the others would be professionals,” Hava says. “I was a bit scared and worried about it, but they were just so nice and friendly that I immediately felt like I belonged. Since the first day, it was like a family.” 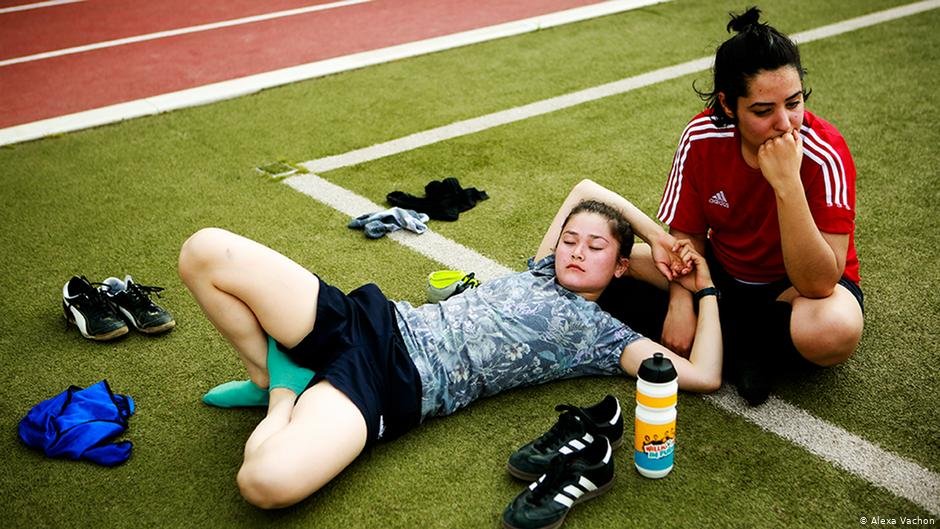 One of the new friends Hava's made on the team is 19-year-old Hadisa, who was born in Iran, although her family is originally from Afghanistan. Like Hava, Hadisa is in Germany alone. Her family is still in Iran, where life as long-term Afghan refugees is tough. Unlike Hava, Hadisa had no interest at all in football before she came to Germany. She remembers trying to change the channel when her dad watched it on TV back in Iran. In Berlin, it was her boyfriend, a player on the men’s team, who encouraged her to try it.

“When I went with my boyfriend and I saw some of the women – some with headscarves, some without, some wore headscarves with long trousers and t-shirts, some had shorts on with little t-shirts – and I went there, I was just a bit like – how can I put it? – surprised, “ Hava explains.

At the start of that first practice, almost three years ago, she felt like she could barely move the ball. But by the end, she was looking forward to the next week.

Most players find their way to the team through word of mouth, or like Hava, from the project visits to shelters. But getting new players onto the pitch can be a challenge. 28-year-old Berliner Carmen, one of the team’s coaches for the last five years, knows that it’s not only intimidating to start a sport as an adult, but most women are already juggling a lot in their lives.

“There is some bias that we’ve met with the women that we tried to motivate or invite to practice,” Carmen says. “Some of them said ‘Actually, I’m already doing sports all day long, because I’m running behind my kids, I’m running behind all the duties that I have to fulfill. I have to go to a language class there, and then I have to go to the Amt (office) there’, and just talking to us about how stressful their life is.”

Not everybody can attend every week. But over the years, Carmen’s witnessed the women grow into a team. She remembers seeing the first arguments on the pitch, and actually being proud they cared enough to shout.

As they’ve grown closer, they’ve seen glimpses into each other’s lives. Displacement, family separation and the legal limbo of the asylum system are just a few of the pressures many players face off the pitch.

One of the players started coming to practice a couple of weeks after arriving in Germany, and at the same time began attending German language classes. After a year she was still not even answering basic questions like "how are you?", until the day she finally received permission to stay in Germany for three years. “We were all so full of emotion,” Carmen explains. “We really thought that she wasn’t able to speak a word of German, and then from one practice to another she then was able to speak. And that just revealed under how much pressure most of the players were, and some of them unfortunately still are, because they still haven’t gotten their permission to stay.”

After some family issues, and bad news from back in Iran, Hadisa felt really down for a few months and didn’t feel like leaving the house or going to practice. It was only when she returned to training this month that she fully realized the important role football plays in her life.

“This month, I’ve gone regularly to training,” Hadisa says. “Because actually, if I’m tired and I don’t feel like it, then when I go to football training, then it’s fun, and that’s cool. Then I become energized, and I think, ‘You know what? My problems are for another time. Now this is my time, just for me’.”

In the future, Carmen wants the team to compete more, and maybe even to register as an official team. For both Hadisa and Hava, their favorite memories are the trips they’ve taken outside of Berlin, to play games against other teams. But Carmen admits that it isn’t always easy.

“I think the story of football being this ‘universal language’ is something of a [myth]. There’s nothing that we can take for granted really. Because the last tournament that we attended in late November, one of our women, one of our players, when we were at the station on the way there, she was spit into her face. And so that also is part of the everyday of the team, that we have to deal with attacks that are misogynist and sometimes homophobic, Islamophobic, ageist etcetera.”

Sometimes mothers bring their teenage daughters to practice here, sometimes daughters bring their mothers. There are roughly 25 players, but that number doesn’t describe the family and friends that join for the trips and social events. In the future, they want to do more activities with this community that’s developed.

As for Hava and Hadisa, both are training to become coaches themselves, and for Hava this means getting more women to turn up, leaving their apartments and shelters, speaking German, learning and gaining confidence from each other, just like she has.

“I think I’ve gained a lot of experiences from football that have made me stronger in my heart, and I’ve also gained confidence. The experiences that the other women have shared have also somehow made me strong – to know that I can do something. That’s not how I felt before. With football you think you might not be able to do something, but you can learn.”

This article was adapted from a radio report for DW's Worldlink program.