German lawmakers are set to pass a bundle of measures to make it easier to integrate migrants, but also deport rejected asylum-seekers. Experts say the laws not only send a mixed signal, but may even be unconstitutional.

In 2015, Danish Mirza came to Germany and applied for asylum. He learned German and joined a badminton club, which helped him settle in. Thanks to his nursing degree from Pakistan and additional qualification training in Germany, he was able to complete an internship at a retirement home and eventually landed a permanent job there. Now, two years later, Mirza would like to train to become a certified geriatric nurse.

His story was picked up by German media when Mirza explained his wish to German Chancellor Angela Merkel at an April town hall meeting in the northeastern town of Schwedt, in Merkel's home district of Uckermark. At the time Merkel promised that her government would soon pass a law to better regulate the asylum process and help skilled foreigners enter the German labor market. On Friday German lawmakers look set to deliver a whole policy package.

It includes the "Geordnete-Rückkehr-Gesetz," which roughly translates to Orderly Repatriation Law. However, many legal experts and the general secretary of Germany's Left party, Jörg Schindler, decry the law as unconstitutional. They say that cutting asylum-seekers off welfare if they fail to cooperate with authorities, making it easier to lock them up prior to deportations, and incarcerating them in regular jails, violates Germany's constitution.

The policy package also includes a law that would make it easier to integrate skilled non-European foreigners into Germany's labor market. This pertains both to foreign citizens who have applied for asylum in Germany but also to individuals applying for a work visa in a third country.

But Professor Helen Schwenken, a migration expert at Osnabrück University, says the bundle of laws send a mixed signal: "One law effectively welcomes migrants, whereas another means immigrants face such high hurdles that it makes it almost impossible to be permitted to train or work."

Already today, rejected asylum-seekers in Germany who are enrolled in vocational training may complete their training and remain in the country if they meet certain requirements.

To be eligible, migrants from what are officially deemed "safe countries of origin" by the government must not have committed crimes on German soil and not attempted to conceal their true identity. If they fulfill these criteria, the odds of receiving a two-year residency and work permit are high. 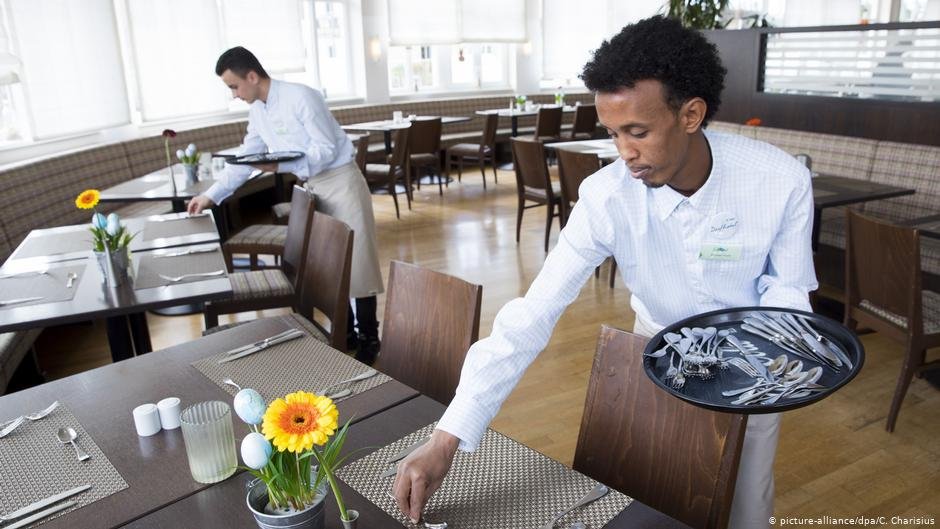 The Association of German Chambers of Commerce and Industry (DIHK) welcomes German parliamentary efforts toward to simplifying the process for asylum-seekers to work in Germany. After all, late last year 400,000 asylum-seekers — most of whom had come to Germany in 2015 — were either pursuing vocational training or had found a job.

Yet Constantin Bräunig, who is part of a DIHK network aiming to encourage companies to integrate migrants, says "the question is whether some of these regulations may be counterproductive." Adding that when lawmakers "require migrants to wait around for certain periods this runs counter to the goal of helping employed individuals remain in the country."

Bräunig is referring to the rule that rejected asylum-seekers must wait for three or even twelve months until they are finally allowed to enroll in vocational training or start work. Referring to this apparent contradiction, Labor and Social Affairs Minister Hubertus Heil (of the junior governing coalition partner Social Democrats), said in 2018: "I have the feeling Germany is deporting the wrong people."

Lawyers and insiders report that often well-integrated asylum-seekers are deported first because are they, unlike others, have not gone underground to evade authorities. The DIHK is well are of cases in which rejected asylum-seekers, who were going about their jobs, were taken by police and deported. The association's Bräunig says these "are exceptions but they keep happening." He told DW that other asylum-seekers who witness such arrests then often quit their jobs fearing a similar fate.

This is exactly what could happen to Mirza, the nurse from Pakistan. Professor Schwenken says that "only few asylum-seekers from Pakistan are granted asylum" and that after being rejected, the new law would mean Mirza would have to wait around for at least three months hoping that the immigration authority temporarily suspends his deportation.

Germany's planned new law to allow skilled workers from third-party states a permanent residence permit will not help Mirza either, as he currently lacks the necessary geriatric nursing certificate, says Schwenken. This means it will remain difficult for asylum-seekers to apply for and obtain a work visa in Germany.

When Mirza addressed Merkel in at the town hall meeting, he did not refer to legal paragraphs but cited simple common sense to argue his case. He said that as the German state had already spent so much money on integrating him, and the town of Schwedt had already shown so much commitment in helping him settle in, deporting him simply made no sense.

Merkel replied that his was "a typical case" and that she would try to tailor the new bundle of laws to account for people in such circumstances. Legal experts, however, say the new policy measures do nothing to help people like Mirza work in Germany.

Professor Schwenken, meanwhile, criticizes the fact that lawmakers "have wasted an opportunity to help a large number of asylum-seekers get into the labor market. The demands placed on them are simply too great."