One city, many stories: Bristol talks about refugees and migration

Bristol, a multicultural city in the south-west of England, has been holding a series of events to get its inhabitants talking about migration, integration and inclusion. The city's mayor, Marvin Rees, found time to tell InfoMigrants more.

"This is about hearing the living testimony of people who have moved to Bristol. But importantly, people move into a context, into a community, so we wanted to hear the stories of people who have always been in Bristol too. We have their stories alongside those who have more recently arrived." Marvin Rees, Bristol’s mayor, sums up what Bristol's refugee festival discussion will be all about. The city is partnering with the UN migration agency (IOM) and Bristol Refugee Festival to explore themes of inclusion.

Although born and bred in Bristol himself, Rees, like many other people in the city, has a history of migration in his family too. His father came from Jamaica as a 12-year-old and his mother’s father moved from south Wales. He says he is "proud to lead a city that strives to be inclusvie and welcoming for all its residents." 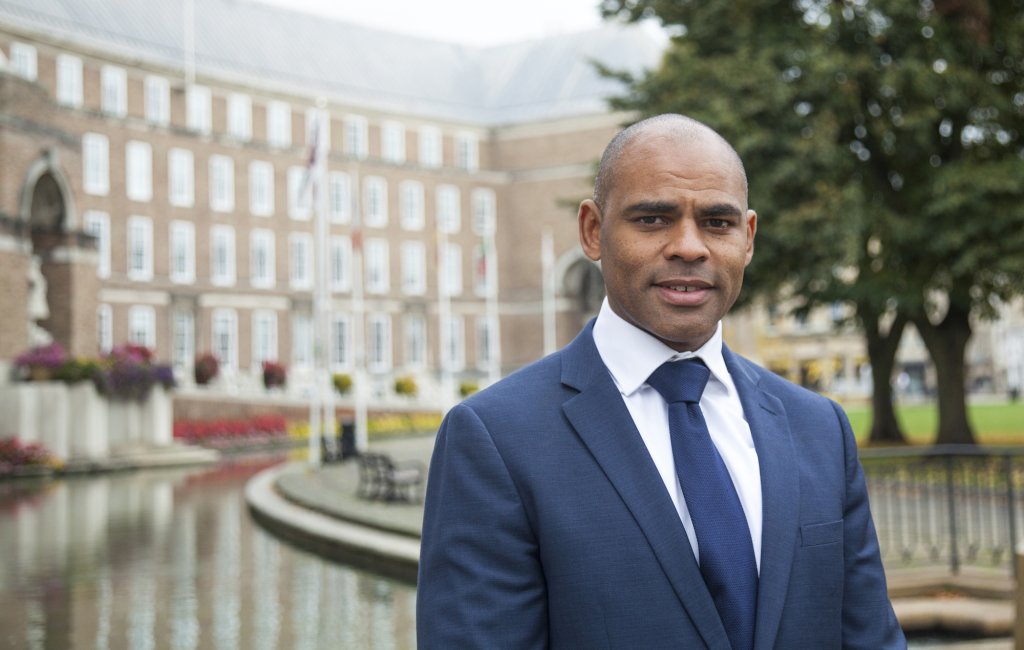 ‘Migration is key to cities’

"My basic understanding of cities is that they only exist because life moves and crosses over. Without things moving, be they people, finance, culture, cities wouldn’t exist." Migrants are obviously a key part of that concept of cities and should be welcomed.

Rees is keen not to slip into sentimentality and what he calls "fuzzy Kumbaya" visions of "everyone clapping around a campfire and sharing food" as a byword for integration. He sees the challenge for cities as not stopping people moving but making sure that cities are "best equipped to take advantage of that movement of people."

Dipti Pardeshi, IOM UK Chief of Mission support this view. "How newcomers – migrants, refugees or anyone – perceive a new community can influence their own willingness to participate in society once they arrive," she says. "With the right policies and structures in place, migrants and refugees can bring fresh ideas, resources and perspectives that contribute economically, socially and culturally to local communities."

Bristol, like many other cities, has several realities. Rees acknowledges that it is an open, international and welcoming city in many ways. As an important trading port, with access to the Atlantic, it has seen movement and exchange for centuries. Much of Bristol’s past and its wealth – the grand houses you still see on the city's several hills, the leafy parks and the big old tobacco and sugar warehouses gracing the town center – were built on the proceeds of the slave trade and later the trade with Britain’s colonies.

This has brought long-established populations, like the Caribbean community into the city. Rees points out that the history of "dissent and protest in Bristol" is also one of its strengths. And the tradition of left-leaning politics means that "some of the nativist politics that some people might want to push don’t find an easy home here."

On the negative side, Bristol has yet to come to terms with its past of colonialism and slavery. "Bristol is a very unequal city," Rees says. "We have areas among the wealthiest in Europe and areas among the most deprived in Europe. We have six areas which are in the top one percent most deprived in England." This inequality affects migration and can "compound the challenges which already exist."

In more recent years, many communities have made Bristol their home. According to the World Population Review and the last census in 2011, Bristol is one of the only major British cities or towns with a black population larger than its Asian population. In fact, 16 percent of the population belongs to a minority ethnic group. 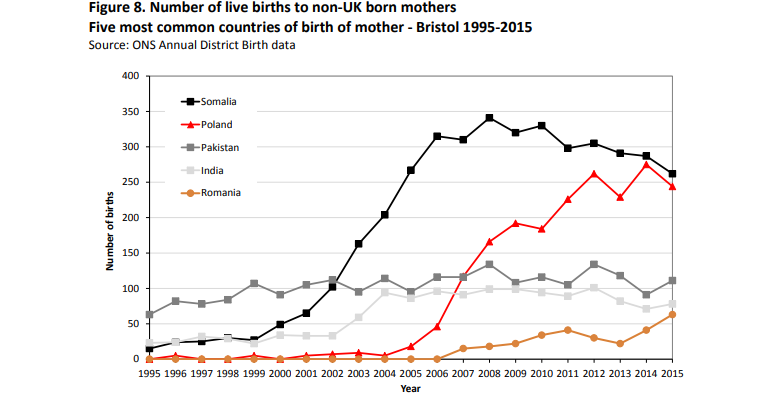 The population of the city has become increasingly diverse, according to the Bristol City Council, with at least 45 religions, at least 187 countries of birth represented and at least 91 main languages present. The proportion of Bristol residents born outside the UK has also increased from 8-15 percent since 2011.

The five fastest-growing communities of first-generation UK-born babies are Somali, Polish, Pakistani, Indian and Romanian. However, overall net migration to Bristol from outside the UK has decreased in the last few years.

‘Integration is about the economy’

"We have to be really careful when we talk about integration," Rees says. He acknowledges that cultural exchange is important, but believes the crux of the matter is the economy. Martin Luther King made the point a long time ago, he jokes: "Give me justice and then we’ll get on to the love! It’s about money and economic opportunity and social mobility." 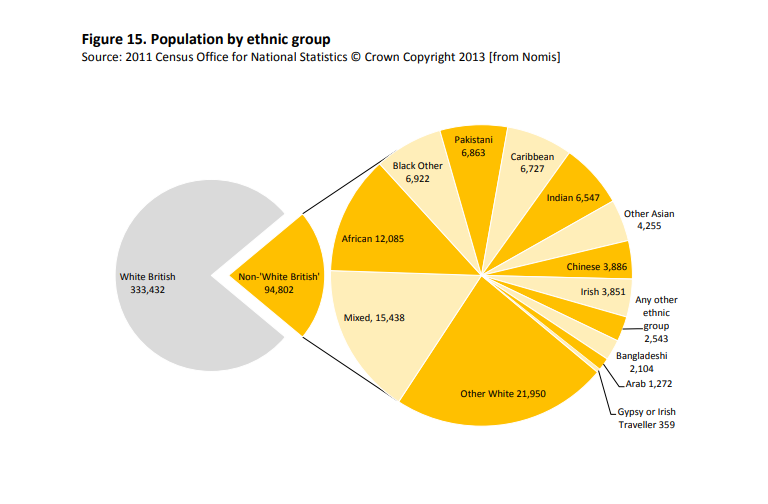 Rees doesn’t want to see the creation of dependent populations that don’t contribute to the economy, he wants people to be self sufficient and have self-respect. Economic opportunity is an important issue for Rees, and one that doesn’t just relate to migration. "A mixed-race kid born today will have lower life chances than the rest of the population. That’s a fact," he says.

He adds that integration is complicated. "My aim is not to get Polish people eating Somali food or vice versa. My aim is to get people relating to each other with dignity; talking to each other, knowing that their children have the same life chances as each other. Then you will have the basis for genuine integration. Until that happens, there will always be an issue."

The mayor has implemented programs like "Stepping up" to put his words into action. "We are trying to bring a wider range of people into political leadership," he explains. "We are trying to get rid of the ban on refugees working, so we can get that voice in the economy, that undermines people interacting as genuine equals. We want to get them full access to the economy and then full access to ascending through the ranks of the economy and have that equal power." 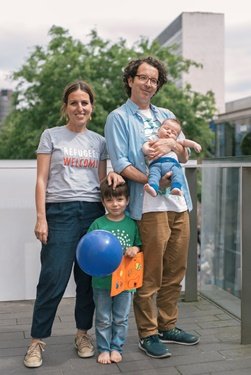 Rees wants to make sure that migrants and refugees are not "objects of charity." A person's status in the country will ultimately be determined by their degree of self-sufficiency. "A friend of mine, Mohamad, was a journalist in Syria. He came to England because he was in a lot of trouble there. He doesn't want to be seen as a problem or as someone who needs services. He came here with skills. We have to create conditions in which people can exercise those skills and not depend on people being nice to them. That is not a dignified experience."

Economic inclusion is Rees' focus, but this will take time. "I have been in for three years, racism has been 400 years in development," he says. "We are not going to flip the tables so quickly, but I would say we are going in the right direction." Rees acknowledges though that Bristol is "one city working within a global order and that makes it quite challenging." We need confidence in our identities

Rees doesn’t want to forget the communities who were born and bred in Bristol for generations. He thinks that to make a welcoming city, everyone has to be confident in their own identity and their own standing, including the "white indigenous populations" that still form the majority of the city’s population.

"People who lack confidence in their own identity struggle more to cope with change and difference because they feel threatened all the time; people who are confident can cope with change and dynamism," Rees says. "We have white communities in the city which have been left behind, who struggle to deal with their identity as English. When change happens, they are more vulnerable to those fears."

All these communities, new and established, will be taking part in the open conversation being held as part of Refugee Week, to make sure that in Rees’ vision for his city’s future, everyone can benefit from an equality of opportunity. "This is about a whole city. We are talking about migration in context. That is important," Rees says. Migration doesn’t take place without talking about the indigenous population too."

Two of the photos in this article were used, with kind permission, by documentary photographer Marcia Chandra. They were part of a series she photographed entitled 'Portraits of Welcome' in collaboration with IOM, Southbank Centre, London in 2016. You can find further information here: https://unitedkingdom.iom.int/migration-initiatives

The full captions to go with the photos are as follows:

Almir, Nana, Emil and Leon, Former Yugoslavia and Greece - I came to
the UK as a refugee twenty years ago. A few months after I arrived
here, my neighbors invited me to join them for Christmas; I would
have been on my own otherwise. What made me feel welcome were the
little things, those little things that are shared. Part of 'Portraits
of Welcome' ©Marcia Chandra/IOM.

Mahnoor & Esra, UK/Pakistan and UK/Sudan – With each of us having
homes in two different countries, there are smells that help transport
us, that help us to know we’re home. Bukhoor is always a memory of
Sudan my family has always carried with us. The smell of mum’s biryani
will always be a part of home for me. Moving to a different country
doesn't mean you need to abandon your identity and conform. The scents
become a part of shared culture, letting you know you’re welcome.
Community means finding commonalities and respecting differences
together. We've been able to find that in the UK, and you will, too.
Part of 'Portraits of Welcome' ©Marcia Chandra/IOM.