"I'm proud to cook in this beautiful restaurant — it's like a castle," said Ali al-Krizi, a 29-year-old Iraqi-Lebanese chef currently working as guest chef at the Le Mess restaurant in Brussels. "I came here without much. ... I have experience, but it's not quite like today."

Al-Krizi, a refugee, has been living in Belgium for four years. Originally from Baghdad, he would sometimes cook for more than 200 people on festive occasions but only studied to be a chef after arriving in Europe. This month, he's been asked to help design the menu at Le Mess, as part of the Refugee Food Festival.

"I participate in the festival because I'm very interested in sharing traditions, Iraqi and Lebanese foods," al-Krizi said. He uses food as a universal means of communication: "Everyone needs to eat."

On this sunny June afternoon, Al-Krizi's lunch menu included meze, grilled sea bream, falafel and a bright orange apricot-pistachio kanafi pastry dessert. Reactions among visitors are positive. "When the person who cooked presents himself and explains us a bit what he's made, that's nice for us, that gives us a positive image," one customer said after chatting with the chef. 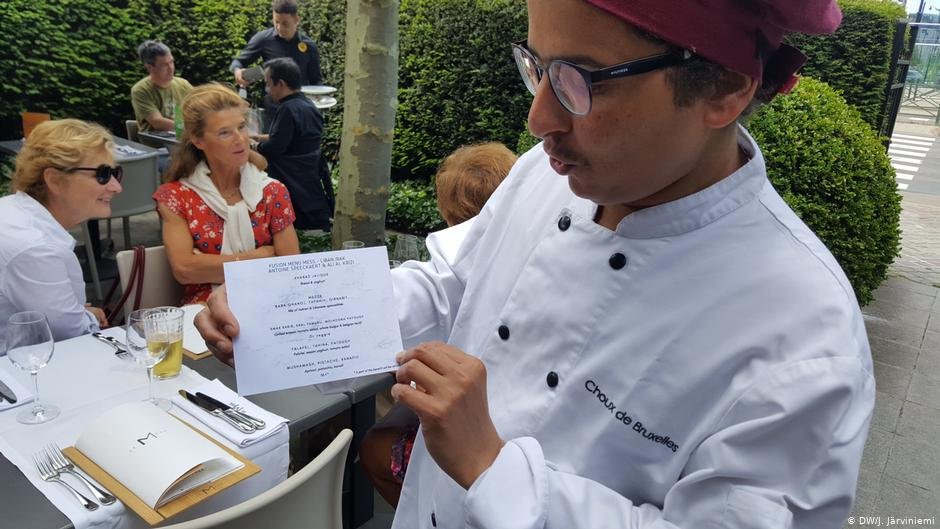 Encounters such as these are at the core of the Refugee Food Festival. Conceived as a grassroots initiative in 2016, the festival aims to foster positive narratives about refugees and to support refugees' integration into their new home countries.

The initiative was launched in Paris, but has since spread to 15 cities, including Cape Town, San Francisco and Copenhagen. The yearly festival coincides with the World Refugee Day on June 20.

Raphael Beaumond, a coordinator of the initiative in Brussels, said the festival was particularly important "in a context where we have negative bias toward refugees." He said there was a need to "bring back humane discourse” and to remember that the refugee situation is about humans, not numbers.

In addition to changing public attitudes toward refugees, the festival has had a direct personal impact on many of the chefs. Organizers say 59% of the 157 chefs who took part in the first three editions have found a professional opportunity, such as a traineeship or a chance to open their own restaurant, thanks to the festival.

Fanny Borrot, who oversees the festival in a number of cities, said a key ambition for the current and upcoming editions would be "for the restaurants to get more involved in training" and to act as mentors for the chefs.

In Paris, the initiative runs a restaurant called La Residence, which is taken over by a different refugee chef every six months. Borrot said that, during the six-month period, the chef will learn skills such as managing a team of cooks, which can help them to launch their own restaurant.

A Syrian chef who worked at La Residence in 2018 now owns a restaurant in Orleans, south of Paris — "No. 1 on TripAdvisor, by the way," Borrot said. She added that organizers would like to launch incubators like La Residence in other cities in the next two or three years.

At Le Mess in Brussels, al-Krizi is staying all month. Manager Marie-Pascale Van Hamme is convinced he has what it takes to be a future chef in Belgium, and that he would be popular.