Although access to education is a fundamental human right, only one percent of the refugee population worldwide are enrolled in university. The photo exhibition titled "The Other 1 Percent - Refugees at Institutions for Higher Education Worldwide" wants to shine a light on this deficit by highlighting young refugees' often difficult path to attend university.

“Everyone has the right to education … and higher education shall be equally accessible to all on the basis of merit.”

Although the Universal Declaration of Human Rights from 1948 enshrines access to higher education, only one in 100 university-age refugees globally are enrolled in a university. In the rest of the non-refugee population, that number rises to 37 percent.

Launched two days before World Refugee Day last week, the photo exhibition “The Other 1 Percent - Refugees at Institutions for Higher Education Worldwide” portrays refugee students from Jordan, Kenya, Lebanon, Rwanda, Pakistan and Senegal who belong to the one percent of young refugees who enjoy access to higher education.

All of the portrayed students are scholarship recipients, most of them DAFI (German Academic Refugee Initiative Albert Einstein) scholars. Since its inception in 1992, DAFI has awarded more than 15,500 scholarships. Implemented by the UNHCR and primarily funded by the the German government, the initiative is named after famous German-born physicist Albert Einstein, who wasn't able to return to his homeland in the 1930s because of the Nazi regime.

According to Antoine Tardy, the exhibition's photographer, each refugee student he portrayed “embodies the determination to succeed despite unfavorable conditions and obstacles.”

An online version of the photo exhibition, which is open through July 9 at Germany's Federal Foreign Office in Berlin, is available here. 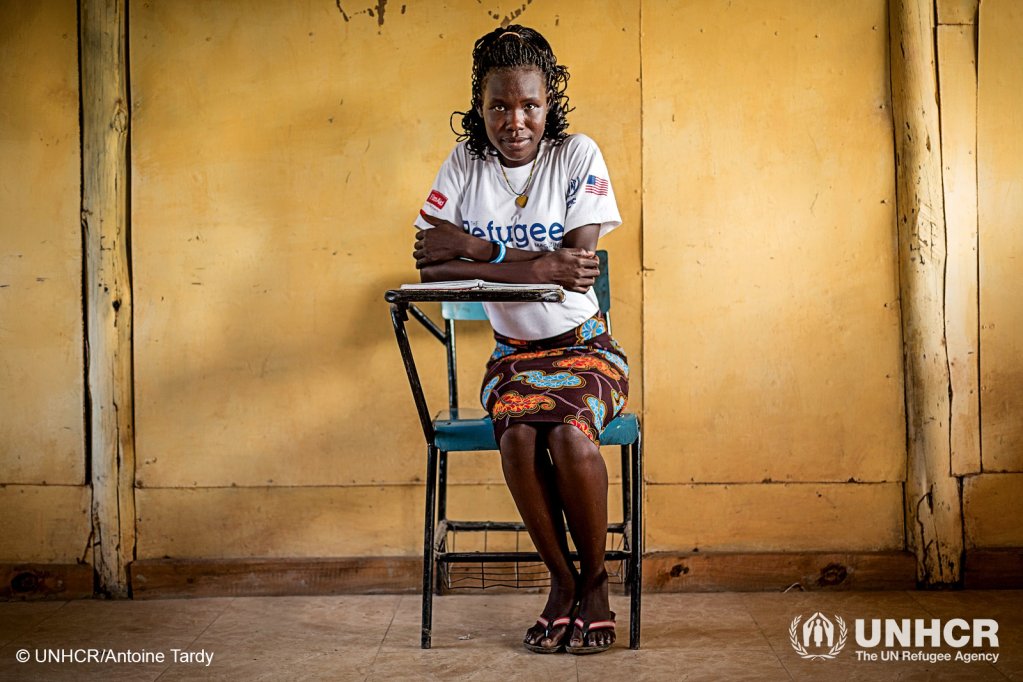 "I always dreamed of going to university but never had enough money," says Chelia, an undergraduate student in disaster management, conflict resolution and humanitarian assistance. "The scholarship is a blessing. It is taking me beyond what I had imagined. When I got the scholarship, I knew I was going to do my best. There are challenges, but I don’t let them be[come] obstacles. I look at them as lessons and as directions for what I want to achieve.”

Chelia is currently studying at Masinde Muliro University in Kakamega, Kenya on a DAFI scholarship. 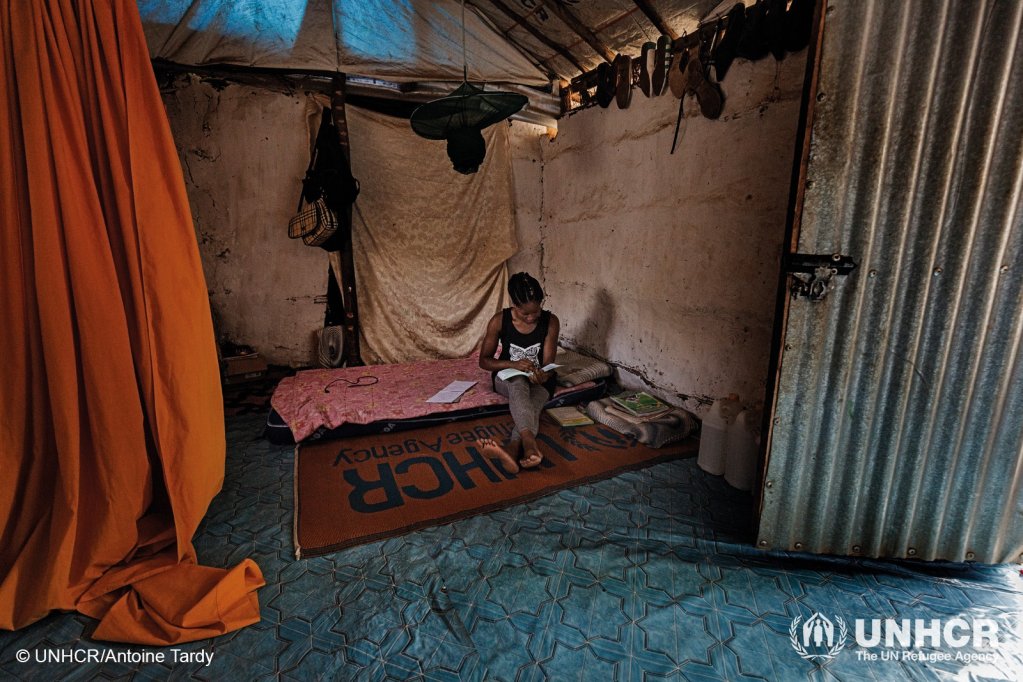 "When we reached the border between DRC and Uganda, we were arrested by soldiers. They killed my father and raped my mother. I ran away and ended up here. I heard that the rest of my family went back to DRC…"

Clarisse grew up in the South Kivu Province of the Democratic Republic of Congo (DRC). Her father, a human rights professor, was regularly persecuted. He dragged the family of seven into displacement. Clarisse reached Kenya alone where she lives by herself.

"What’s my future going to be like? I really don’t know. All I know is that I must keep studying and take all my chances." 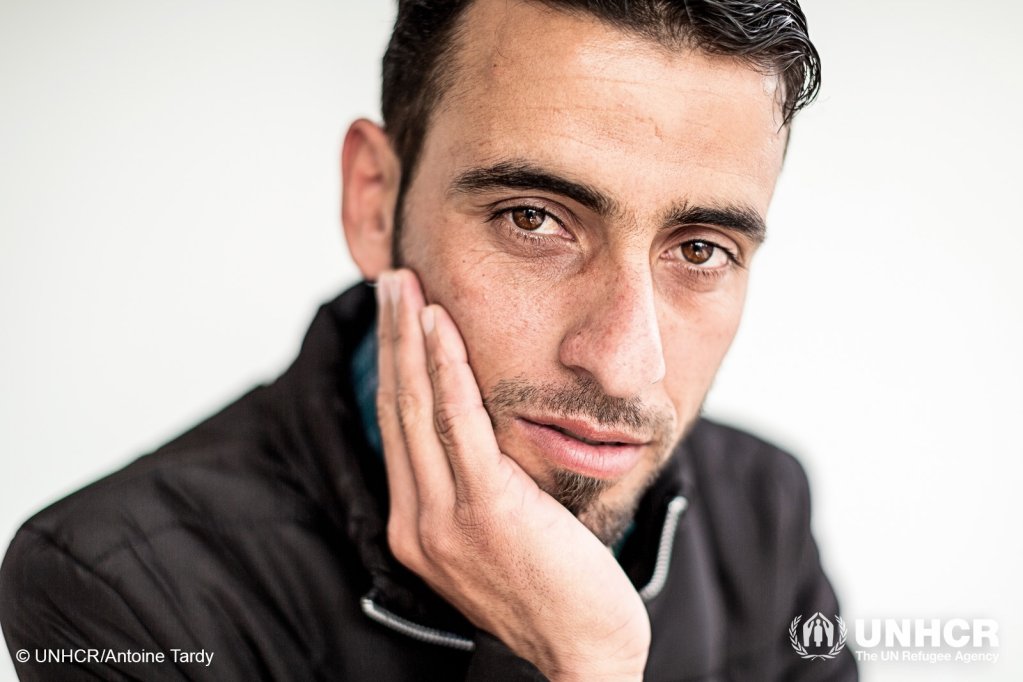 "My children are still young, but I will surely tell them about the importance of education, about the incredible difference it makes in somebody's life, and about all the hardship I had to face personally,” says Bassel, a master’s student on a HOPES scholarship.

Bassel is originally from Syria but lives with his parents, wife, their three children and his sister in Lebanon. He told Tardy about the kind of hardship he has faced. He is one of only two from his Syrian village to have reached university. In his family and in his refugee community, he is the only one. That has made people jealous, he says.

"People who were very close to me, that I considered my friends, did not take it well. Some of them turned their back on me, others became hostile, even stole money from me. I had to change houses, for instance." Despite his difficulties, he says that it has fired him up to keep studying harder. “I hope it will motivate [my children] to study [too]. I want to be an example for them."

Bassel, who is also a DAFI alumni, studies Arabic literature in Lebanon, dividing his time between Tripoli and the capital Beirut. His hope is that once he graduates, he can return to Syria to teach. "Finding a teaching job in Lebanon, for Syrians, is almost impossible. It might be possible, through NGOs, but I have not been successful so far." 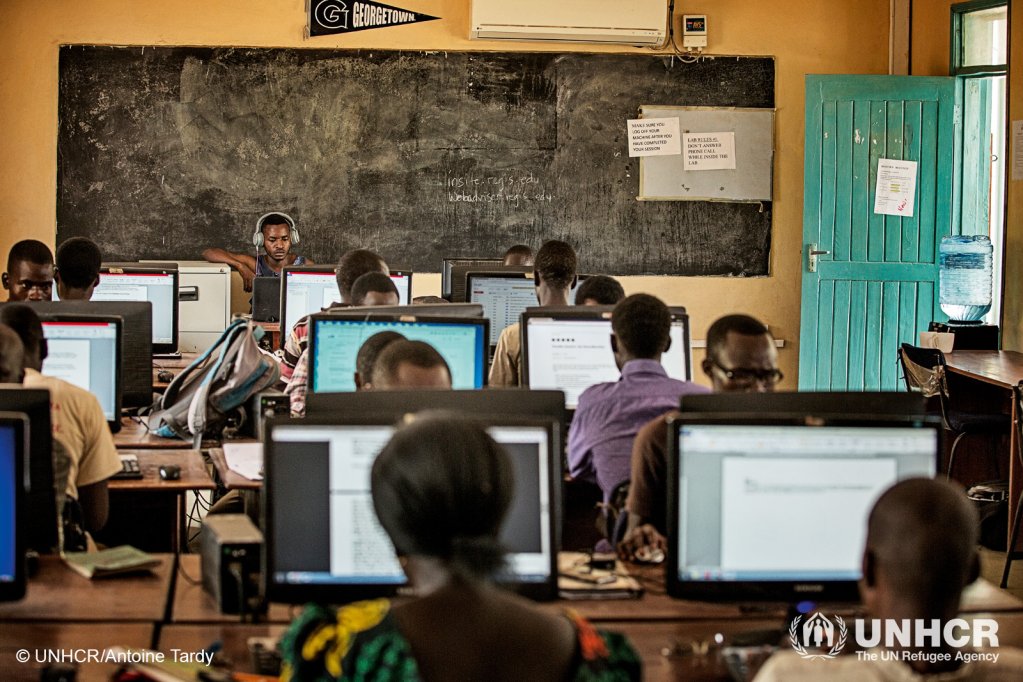 In this classroom run by Jesuit Worldwide Learning (JWL) in the Kakuma Refugee Camp in northwest Kenya, 79 students, 22 of them women, follow a blended, three-year Diploma of liberal studies. The course combines face-to-face support with online learning.

According to photographer Antoine Tardy, JWL "offers a higher education opportunity in a context characterized by challenges. Obstacles facing students include financial difficulties, cultural or traditional practices that do not favor girls’ education, congested schools, under-resourced facilities, a lack of trained teachers, and often gaps in recognition of earlier studies." 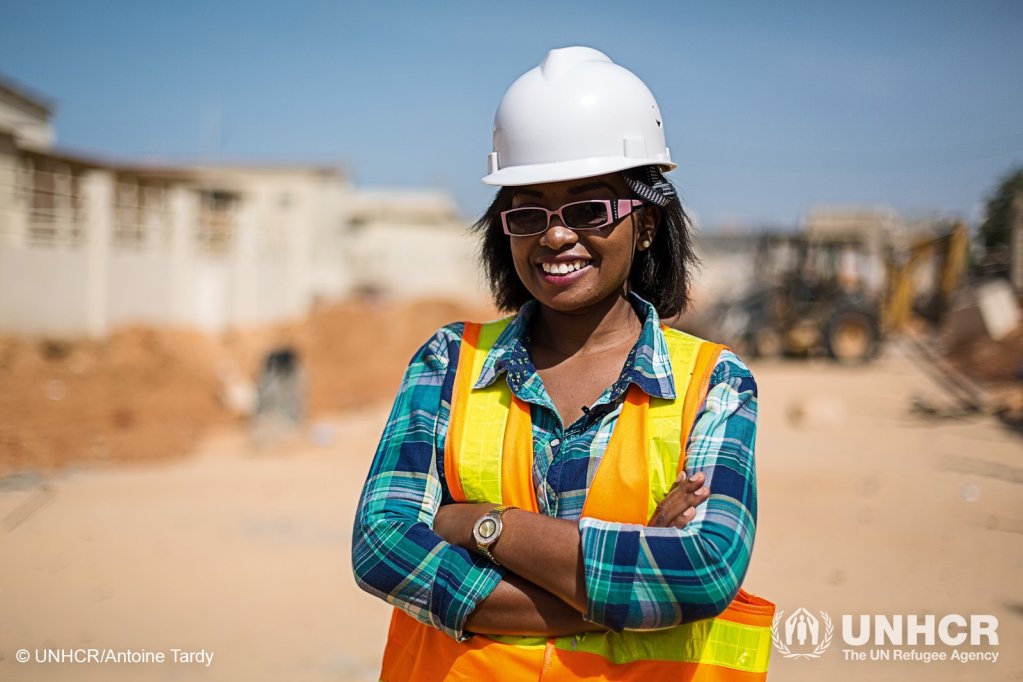 When she was five years old, Yvonne fled Rwanda with her mother and brother during the 1994 genocide. The family then transited through various camps in the Democratic Republic of Congo and the Republic of Congo (Congo-Brazzaville) until they finally reached Senegal in 1999. They have been calling Senegal home ever since.

Thanks to UNHCR’s support, Yvonne eventually graduated from college with a master’s degree in quality, hygiene, security and environment. She currently holds a managerial position at a construction company in Dakar.

“Our mother taught us that someone who is educated will always be better off than someone who is not. She was a widow, she had two children and no means. She had to fight in order for us to get food. In spite of all this, she has always preserved her dignity and independence. Today I work, I pay my rent, I finance the education of my child, I can give a little something to my parents, I am respected," Yvonne says. 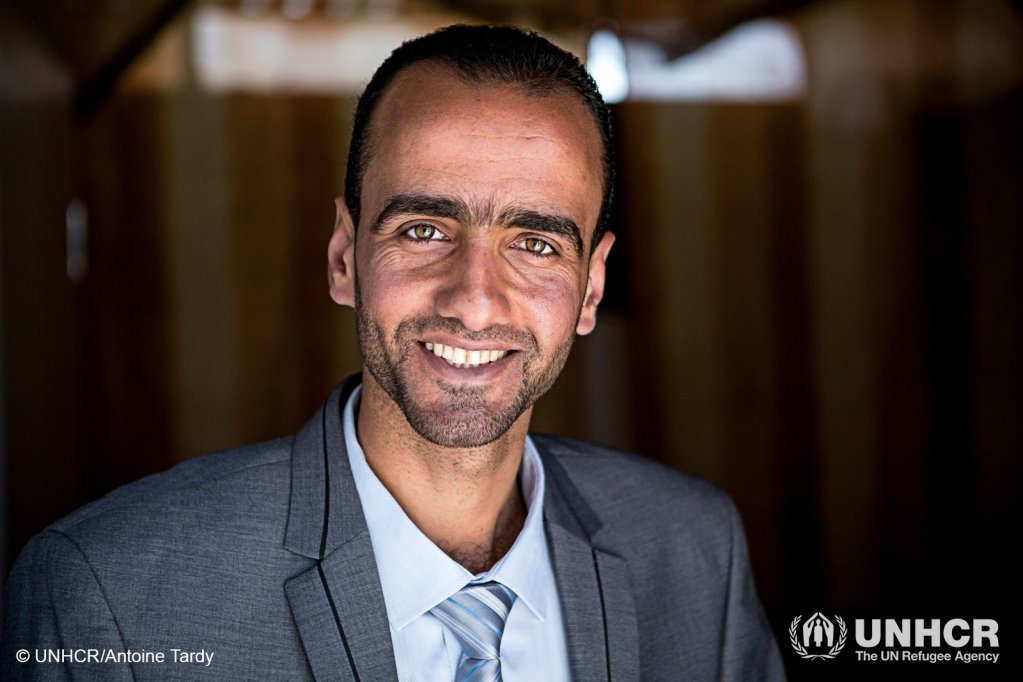 In 2012, Monther fled Syria with his family and was unable to go to university for two years. During that time, he volunteered for several organizations in the Azraq camp in Jordan, supporting the local community. “It helped me get through that difficult period. It took me some time to adjust to life here in the camp, with the heat, the power cuts, the limited services..,” he says.
Monther graduated top of his class with a Bachelor of Law in early 2017.
“I cannot even describe how I felt the day I was accepted into the DAFI programme. I was getting my hopes and my dreams back. Education is everything in my life.” 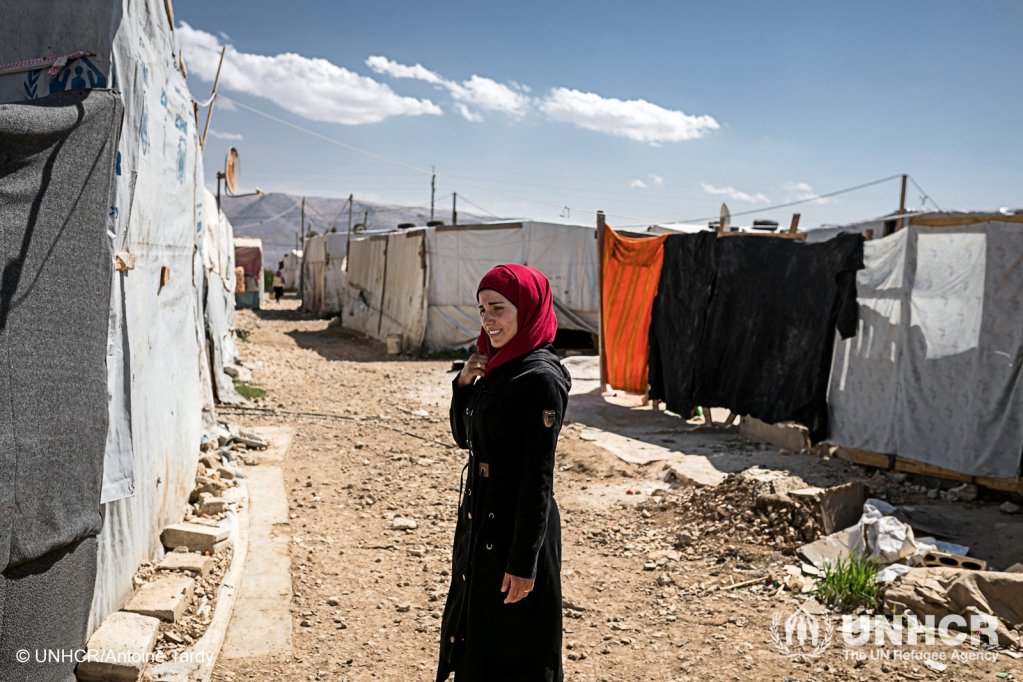 Manar, an undergraduate student in history on a DAFI scholarship, lived in a settlement in the Beqaa Valley in Lebanon for almost five years with her husband and their three children. Now, the family lives in an apartment outside the settlement. Yet she still provides homework support on a voluntary basis to the kids there. "I really love children," she says. "They are honest and frank. They come as they are."
"The refugee children here in the settlement really need support. Many of them do not attend school. Either there is no room for them, or it is too far, or something else. I want to do my best to help them."
Manar says she wants to become a school teacher.