Female captain vs. ‘ll Capitano:’ How a German defies Salvini

Carola Rackete, the 31-year-old female German captain of the Sea-Watch 3, has become a symbol of defiance and a left-wing hero in Italy for challenging Interior Minister Matteo Salvini's "closed-ports" policy. Who is the German captain defying Salvini?

In a matter of days, Rackete has become a hero and villain at the same time.

Italy’s far-right populist Interior Minister, who depicts himself as “Il Capitano” - as captain and leader of a nation - now, has some competition, at least concerning this title: “La Capitana,” how Italian media dubbed German captain Carola Rackete.

The dreadlocked 31-year-old has defied the centerpiece of his anti-migration policy: his "closed ports" policy that bans private migrant rescue ships from Italian ports. Salvini also accuses NGO ships of being complicit with people smugglers.

“Of course it’s a situation I didn’t wish for,” said Rackete, who was born and raised in northern Germany. But she said she was responsible for the people on board, where the situation was "incredibly tense." Migrants were also "incredibly frustrated" at not being allowed off the ship, she said.

People had threatened to jump overboard, and they were heavily traumatized due to their escape, according to Rackete. This is why she resolved to this action - not because she sees herself as Salvini’s adversary.

“His opponent is the entire civil society,” or everybody who doesn’t agree with the hard stance of the populist government in Rome. “There is a right to be rescued. It’s about the principle of human rights,” she said.

Rackete sounds determined, shrugging off judicial inquiries. She knows the ropes on ships, having received her nautical officer training in northern Germany. Before joining Sea-Watch, she was standing on the ship’s bridge for Greenpeace and a marine research institute. Back then, the work was about polar research.

Now, she’s in the scorching heat of the Mediterranean. Rackete says she’s aware what she’s getting herself into: Risking a hefty fine, even a prison sentence in the worst-case scenario. According to media reports, the Office of the Public Prosecutor in Agrigent has already started investigating. “Everybody knows you can be next,” she said, especially since the beginning of the “criminalization” of sea rescuers. Three recent cases serve as cautionary tales: German captain Pia Klemp, who must soon appear at court in Italy; Claus-Peter Reisch, the captain of German organization Mission Lifeline, was sentenced to pay a fine; and the rescue ship “Iuventa,” which was confiscated in August 2017, and whose crew was under investigation.

Sea-Watch 3 originally picked up 53 people off the coast of Libya, on July 12. Since then, 13 migrants have been evacuated from the ship and brought to Lampedusa on medical or humanitarian grounds, in three separate operations.

In Italy, left-wing politicians like Graziano Delrio, who was the minister in charge of the Italian coastguard between 2015 and 2018, celebrate Rackete as “brave woman” and “hope for a humane world.”

To others, she is the enemy. The boss of right-wing party Fratelli d’Italia, Giorgia Meloni, said the Sea-Watch 3 ought to be “sunk.” Italy's far-right Interior Minister Matteo Salvini himself explained in his familiar sarcastic tone: “The captain as a hero of the Left, born rich as a white in Germany, ought to do voluntary work in Germany instead of taking 42 people hostage for 15 days.”

Salvini has taken the lead in turning away the ship, insisting that its migrants should go to Germany or the Netherlands, the nation where the Sea-Watch 3 is registered.

However, Rackete said she was never notified about the fines, despite Italian customs police and coast guard officers boarding her ship several times. She called it a "surprising but also quite positive sign."

"We have been told there is hope for a political solution being reached very soon, everything is hinting towards that direction," she said. 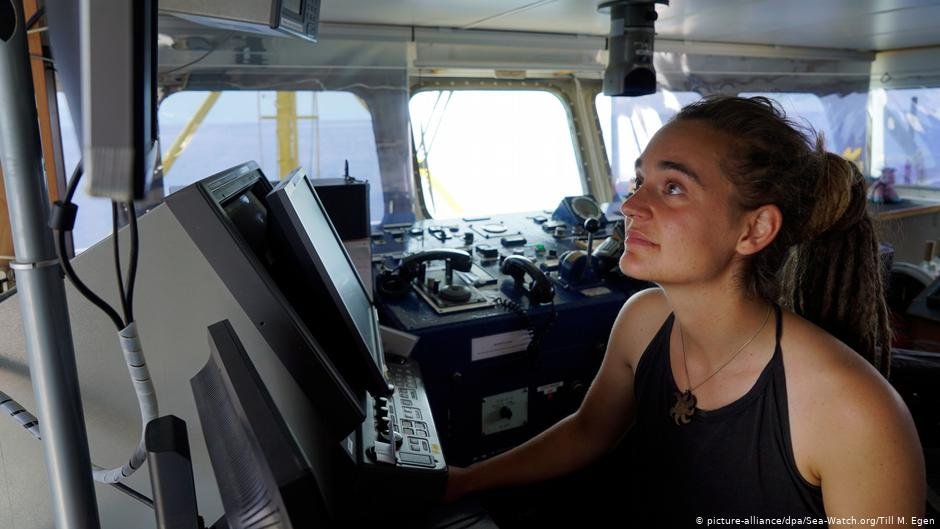 Still, Rackete also said Sea-Watch had tried without success since the beginning to cooperate with the authorities, engaging with Italy, Germany, Malta and France and opening contacts with the European Commission.

"It has been made very clear that none of these actors actually has any interest in finding a solution and it ultimately has been us who had to take steps", Rackete said.

"We have been left totally alone", she added

In Brussels, European Commission spokesman Natasha Bertaud said there were "some positive news from member states," but added it was too early to provide details, as "intense contacts were still going on with many member states."

According to Sea-Watch spokeswoman Giorgia Linardi, it is Germany, France, Luxembourg and Portugal who have offered to take in the migrants. Germany already said on Thursday it could welcome some people as part of a joint effort with other EU nations.

Maritime law-wise, the situation is complicated. According to Valentin Schatz, who teaches international maritime law at the University of Hamburg, said although the “law is slightly more on the side of the NGO,” it “doesn’t govern how to settle the situation.”

Meanwhile, Rackete pins her hopes on solidarity from people who have experienced similar things.

Stefan Schmid, the former captain of the rescue boat “Cap Anamur,” said: “I admire Ms Rackete for keeping her composure under those circumstances and being dependable to the refugees on board.” This was “far from easy,” he added.

In 2004, Schmid had docked in Sicily despite a ban with 37 refugees on board. The ship was confiscated, and he had to appear at court for assisting illegal immigration. He was cleared of his charges years later.